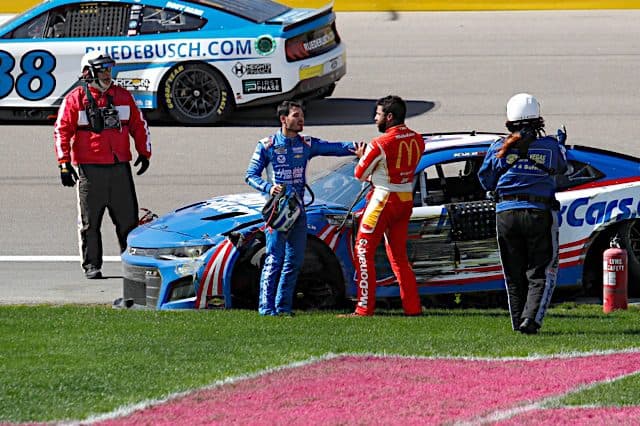 As the Hendrick Motorsports driver extracted himself from his No. 5 Chevrolet and removed his safety equipment, Wallace marched toward him on the Las Vegas Motor Speedway frontstretch. Larson ran through the likely scenarios he was about to face.

On Lap 94 of Sunday’s (Oct. 16) NASCAR Cup playoff race, Larson had made an admitted “aggressive move into (turn) 3” as Larson tried to pass both Wallace and Kevin Harvick at the same time.

When Larson and Wallace cleared Harvick, Larson “chased it up (the track) a bit.”

Larson “was trying to leave (Wallace) room, but ultimately ran him out of room and got him in the wall.”

After their contact, Wallace’s No. 45 Toyota moved down the track and into Larson’s car in what Larson interprted to be an intentional attempt to retaliate.

“I knew he was going to retaliate,” Larson said. “He had a reason to be mad, but his race wasn’t over until he retaliated. It is what it is. Just aggression turned into frustration and he retaliated.”

When it was over, both cars were junked and Wallace began his long walk to confront Larson.

“I could see him walking over, so I figured we were gonna have some sort of chit chat,” said Larson.

Larson figured there were three options for what was about to happen:

Upon arriving on the scene Wallace shoved Larson fives times while yelling at him, before walking away.

Bubba Wallace is NOT HAPPY with Kyle Larson.

Some pushes and shoves after they wreck. #NASCAR pic.twitter.com/aaAn0idrJp

At the track medical center, Wallace told NBC Sports’ Marty Snider to “stop fishing” when asked if he had retaliated against Larson.

“He (Kyle Larson) knows,” Wallace said. “He knows what he did was wrong. He wanted to question what I was doing, and he never cleared me. I just hate it for our team. Our McDonalds Toyota Camry was super solid – just needed to find a little bit on the short run and get the balance where we needed it. It would have been like (winning at) Kansas and now the car is junk.”

Larson was asked if he thought the alleged retaliation at speed was appropriate.

“I think with everything that’s been going on here lately, with head injuries, fractured ligaments and all that, I don’t think it’s probably the right thing to do.

“We’ve all done it – maybe not all of us – but I have. I’ve let the emotions get the best of me before, too. I know he’s probably still upset. I’m sure with everything going, he’ll know that he made a mistake in the retaliation part and I’m sure he’ll think twice about that next time.”

When Larson was asked if he thought Wallace should be penalized in any way, he hedged.

“No, I mean, I don’t want to be the one to judge that,” Larson said. “I don’t think he’ll do that again. Whether he’s penalized or not.”

In the end, Larson said “I would rather him (shove me) than tear up our cars in a dangerous manner. It is what it is.”

After the retaliation, Wallace took a walk to Larson’s car. He had time to get his composure and think about the ramifications of his actions. He chose to pick a fight. That bothers me; Bubba has anger management issues.

Ironic that a Toyota driver’s anger caused real damage to one of the two remaining Toyota teams championship hopes. Worse, his actions could have been tragic. Or at the very least, regrettable.

Bubba takes out JGR teammate Bell. Toyota isn’t happy at all. Unsafe car used as a weapon, wonder how nascar can make light of this.

NASCRAP won’t do anything, it’s their precious Bubba……..

I doubt NASCAR will do anything because of the optics but boy, does this pretty much open the door to almost anything if they don’t. Purposely wrecking someone at high speed. Physical assault afterwards. Affecting one of the playoff drivers inadvertently through your actions. And overall totally losing control.

They have to do something don’t they ! Bubba just showed he doesn’t like Japanese and attacks them on live tv

Gibbs team. NO punishment. How many times have we seen Denny and Kyle use up a driver on the outside? Larson should have slung that helmet into his head after the first push. … and why were the NASCAR people spectating??

Bill B
Reply to  Fed Up

I noticed that too. Why did the officials let him walk that far? Why after the second push didn’t the usual happen and officials smother the flames?

And I thought that too…. If it were me and I had a weapon/helmet in my hands, after the second push, the thought of using the helmet to bash his head in may have crossed my mind.

kb
Reply to  Bill B

Larson seemed shockingly passive, imo. We watched that jerk Darrell and said that helmet would have made a connection with his stupid skull, pronto if he was pulled that crap with me! The optics will look bad if WOKECAR doesn’t do something, but they are blind to their favoritism and woke BS. So, I suspect nothing will be done.

I was actually referring to optics of penalizing the only black driver. That will scare the hell out of NASCAR but they really need to, but I wonder if they have the balls.

Although your point about the opposite is also correct, the optics are equally bad if they don’t do something. With all the injuries in NASCAR (and the NFL as well) it’s a really touchy subject right now in the media. If they don’t reign that kind of retribution in the optics are terrible because it looks like they don’t care about their athletes.

Josh Berry was in the same position day before. Smacked wall as hard as Darrell but went on to win the race. The optics of that alone should be embarrassing enough for Darrell. I saw lack of talent and somebody putting on an act for TV.

Tom B
Reply to  Bobby DK

That’s the first thing I thought of too. Josh went on to win, Bubba went for wrecking.

Bell’s car prevented Larson from hitting the wall squarely on the rear. The contact with the 20 turned the 5 just enough to prevent him from hitting in the dreaded angle that’s been causing injury.

If NASCAR fails to react strongly to Wallace’s totally wrong actions, they lose all credibility over issues! The incident itself is bad enough — retaliation at full speed?? Taking out a playoff participant — Double the penalty!

NASCAR has credibility to lose? When did that happen? They haven’t had any credibility for years! lol

Last edited 3 months ago by Jeremy
6
0

Nice job on choosing the main photo to make it look like Larson is hitting Bubba instead of trying to defend himself.

Darrell Wallace is such an unlikable douche. What a drama queen PIA!

Wallace is nasty piece of work

I’m not a Larson fan, or a Hendrick fan, but I do think Hendrick has always run a classy and professional organization….and he has always expected the same of his drivers. That class came through today in Larson’s comments. He took the high road, he was classy, he was humble, and he excepted responsibility for his (minor in my opinion) roll in Wallace’s hitting the wall. And in spite of the best efforts of the interviewer, he wasn’t bated into saying anything negative about Wallace. Conversely, Wallace deflected, lied, and generally acted with a complete lack of class when he was interviewed, much like most other Gibbs drivers do (and I don’t care who’s name is on the entry list, we all know 23XI is just Gibbs/Toyota way of getting around the four car team limit).

Toyota has all of their eggs in one basket and should be regretting that bout now!! Gibbs gave up their best driver for being a hot head and now has two young punks who don’t have half shrubbys talent between them..

Kudos to Kyle for allowing Bubba to make a complete jerk of himself and not retaliating.

Bubba is a screw ball and has been racing long enough he should know better. He ruined his race car and his chances for the race win. Endangered both driver’s and possibly others and ended his teammates championship run. Toyota lost their best driver for being immature and kept this low talent clown. It highlights the dismal condition of toyotas program…