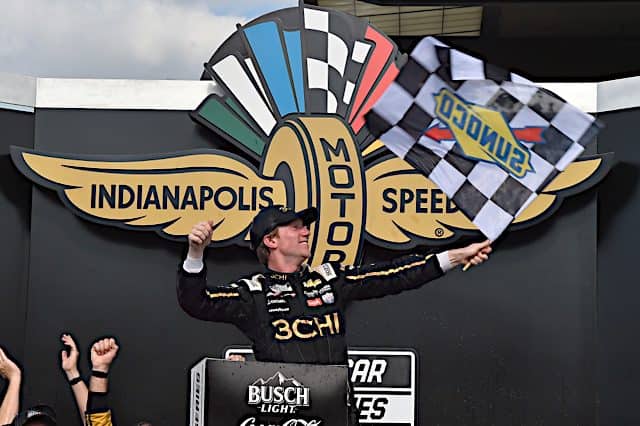 “Where did that guy come from?”

As Tyler Reddick‘s No. 8 Chevrolet streaked down the backstretch of IMS’ 14-turn road course, he was unexpectedly racing behind the No. 1 of Ross Chastain.

To everyone watching, it looked like Reddick was battling Chastain to win the second annual Verizon 200.

Well, the images on your screen were not what they appeared.

Moments earlier, Reddick had led the charge as a mass of cars raced toward turn 1 on the restart.

Like plenty of restarts before, cars did everything and went everywhere: they spun, rubbed doors and became one with the turn 1 grass.

“No other form of motorsports, no other race that’s ever been put on in this place (like that) other than NASCAR, man, that’s all I can say to describe it,” Austin Cindric said later. “Last time I’ve really been a part of something like that was rallycross, that’s kind of the context for it. I figured it would be a bit that way with not having steel fenders anymore, but that was a lot.”

Amid all that chaos, as Cindric drove beneath Daniel Suarez, Ryan Blaney and AJ Allmendinger,  NBC’s cameras caught a blue and black car streak onto the access road that split off from turn 1.

Located right up against the outside wall as everything began unfolding underneath him, Chastain judged he wouldn’t make the right-hand turn and made his decision.

Chastain claimed it was “just pure reaction” on his part.

“I thought we were four wide, and couldn’t go any farther right, and decided to take the NASCAR access lane out there,” Chastain said. “I took it in practice on exit, overshooting turn 1. You know where (the escape routes are) at and in (turn) 12 you have to go around the loop there. …

“Just wanted to not get hit and merged back on where I merged.”

That was to the left of Reddick as he raced through turn 3.

“I was trying to watch on TV and then it flashed away and was showing the cars wrecking and they flashed back to Tyler and (Chastain) is right there,” Burnett said. “I saw one car go blowing through the whole thing. I didn’t realize that’s where he came out. I was trying to get caught up.”

When Reddick clocked Chastain’s presence, his reaction was a more adult version of “Oh no!”

“It didn’t seem like real life,” Reddick recalled later. “‘There’s Ross, what do I do?’ He got to my right rear really nice, and as much as I wanted to go through the chicane side-by-side with him, I’m like, ‘if I screw up and fly my right-side tires over the inside curb, I could get a penalty. I don’t know if I’m racing him, I don’t know if I’m not.’

“So it put me in an interesting spot. I wanted to pass him, but I also didn’t want to penalize myself trying to get around him.”

Reddick was also confused by the way Chastain “was behaving in the car” driving it.

“I didn’t know if he was trying to motion me by and then I thought he was, and then we get in the corner, I realized, ‘oh, no, he’s not,'” he explained. “It was just a very weird situation, and then with Austin Cindric as close as he was, it just made the whole situation that much more dynamic.”

One of Reddick’s spotters had radioed to the team and Reddick that Chastain would likely be penalized.

Reddick thought it was Jim Pohlman.

“‘Well, dammit, Jim,’ — Star Trek reference right there. ‘He’s going to get penalized’ isn’t good enough.'” Reddick thought. “I didn’t know for sure if he was or wasn’t.

“I was trying to race him as hard as I could, but I saw Austin Cindric was right there, and if you get battling side by side in certain sections of this racetrack, you can really hurt lap time on both drivers and allow third place to catch up.”

While it was exciting to watch, the illegitimate battle for the lead saw Reddick and Chastain racing for position through the rest of the course, side-by-side multiple times.

That left Chastain as a barrier to Cindric, the legitimate second-place car. However, Cindric might not have been able to mount a run at Reddick anyway.

“Wish Ross would have opened up a bit of a hole there for me to contend with (Reddick) there, but I think I had a lot of toe damage from the restart prior, just wanted to come out unscathed,” Cindric said.

With Cindric scored in second, NASCAR’s penalty against Chastain relegated the Trackhouse Racing Team driver to a 27th-place finish.

Despite leading 38 of 86 laps from the pole, Reddick said he didn’t “take anything for granted” over multiple restarts to end the race.

“I knew I was going to have to work really, really hard on every single restart to win this race, and then when I saw Ross come flying back on the track until that decision was made to penalize him, I didn’t feel like I had won it at all, so I just had to go out there and work hard,” Reddick said.

He joins the likes of Juan Pablo Montoya, Marcos Ambrose and Allmendinger as Cup drivers in the modern era whose first two NASCAR Cup wins came on road courses.

The first came four races earlier on July 3 when he beat Chase Elliott at Road America.

It’s also the first win for RCR at Indianapolis since Paul Menard earned his one and only Cup victory in the 2011 Brickyard 400.

“It feels pretty dang special, I’m not going to lie,” Reddick said. “I’ve watched a lot of racing at this venue as a kid growing up. A lot of really incredible drivers have won at this racetrack, and it’s really, really cool to be a part of the group of drivers that have won here, and yeah, I’m really happy about it.”

Well, we all knew Reddick could win and we’ve been waiting. Good timing on his part, confidence and mojo.

Great race! Maybe his sponsor will pass out some free gummies!