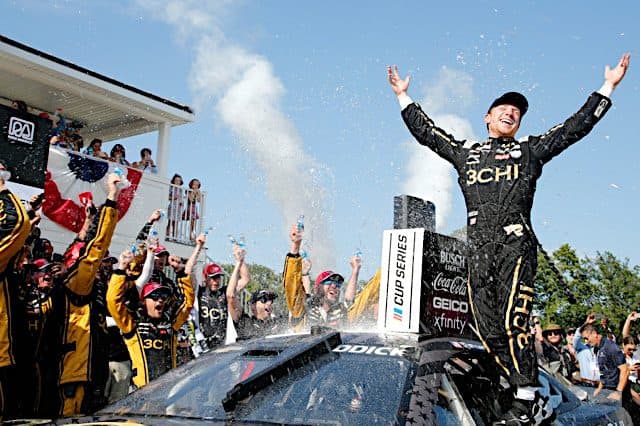 Alexa De Leon, girlfriend of Tyler Reddick, sat on the bottom step of the podium in Road America’s victory lane. Her 2-and-half-year-old, blonde-headed son, Beau, was cradled in her arms, sleeping like his life depended on it.

The rumble of a NASCAR Cup Series car’s engine. Champagne bottles being loudly uncorked. The cheers of excited fans.

Every minute or so, a loud “Woo!” went up from a crowd of Richard Childress Racing crew members, as they slowly made their way through the “Hat Dance.”

Beau was oblivious to it all.

De Leon tried to form one of her son’s hands into the universal sign for “No. 1,” and failed.

As another “Woo!” went out, De Leon rocked her son forward in unison with it.

That’s how long the crew of the No. 8 Richard Childress Racing team had to wait.

“Seventeen laps at Elkhart Lake, at Road America, is the longest laps in racing,” Andy Petree, RCR’s VP of competition, told Frontstretch, conveying the literal and figurative sense of the distance.

With eight laps to go and Elliott barely under a second behind Reddick, the voice of Reddick’s spotter, Derek Kneeland, keyed up over the radio.

“Out the windshield, do not look in that mirror.”

“I was looking at my mirror,” Reddick admitted later. “It hurt me a few times. But more than not it was a positive because I could kind of see where Chase was gaining on me and where I was making gains on him, too. …

“It was great to see once he was getting smaller and smaller that I was starting to do the right things and build that gap.”

After keeping Elliott at a manageable, yet still dangerous distance for 12 laps, the third-year Cup driver began pulling away from the 2020 series champion with five laps to go.

Crew chief Randall Burnett at one point turned to Petree on the No. 8 pit box and said “Only four laps to go.”

Petree responded, “Yeah, but at Martinsville, that’s like 32 laps or whatever.”

There was a lot a member of Reddick’s team or his girlfriend Alexa, could think about in that time.

The cut tire at Auto Club Speedway in February.

The near miss on the Bristol Motor Speedway dirt track, with Reddick being taken out half a lap from the finish by a Chase Briscoe dive bomb.

Two laps remained and Reddick’s owner didn’t like what he saw.

As Reddick ran away from Elliott, potential doom had arrived.

And it came courtesy of his teammate, Austin Dillon.

A brake rotor on Dillon’s No. 3 car had exploded, causing his left-front tire to cut down as he drove down one of the road course’s long straightaways toward turn 5.

“Oh, gosh, this is what’s gonna keep us from winning,” Petree thought.

But unlike Auto Club, Bristol and the other near misses, doom never came.

Dillon safely pulled off the track in the turn 5 run off.

Burnett elected not to tell Reddick about the situation at all. Reddick found about Dillon’s problem when Childress told him personally after the race.

“I’m glad it didn’t bring a caution out for sure. But hey, I would have been ready for it, honestly,” Reddick said.

Without the knowledge of his teammate’s issue, Reddick described his final five laps around the Wisconsin road course as “pretty nice.

“I’d say from that 10 to 5 (to go) range when Chase was kind of closing back in and right there, I was kind of searching within myself what I needed to be doing, that was probably the most stressful part,” Reddick said. “The last five laps were pretty stress free. It was really nice to know that I had that much left in the tank in the car to be able to hold him off and have that gap and then manage it.”

The last two years have seen one first-time Cup winner after another. From long-time drivers like Michael McDowell, Daniel Suarez and Ross Chastain, to relative newcomers in Cole Custer, Christopher Bell, Chase Briscoe and Austin Cindric.

Reddick, a two-time Xfinity Series champion, said he didn’t let the dwindling pool of potential winners get to him over the course of his first 91 Cup starts.

“Because it was very obvious that they would go out there and have those days where they just executed all day long,” Reddick said. “I knew if they can do it, we can do it. So if anything it was probably motivating and encouraging. It wasn’t demoralizing by any means.”

He said he could be “pretty miserable” in the wake of his mounting disappointments.

In victory lane the “hat dance” continued, along with the “Woos!”

Next to the bag sat two bottles of a Childress Vineyards sparkling wine, named “Blanc De Blancs Victory Curvee.” One of them would wind up with Reddick later in the track’s media center.

“He was awake and then I looked down at him and said, ‘Look, there it is, he won!’ and he was just out.”

De Leon will likely be holding Beau’s slumber over him in the future.

“Oh yeah, he’s been talking about this for a year, his dad winning,” De Leon said. “And now he’s just asleep for it all.”

In the immediate aftermath of her boyfriend’s triumph, what did the moment mean for De Leon?

“It really is incredible to be sitting here, even if (Beau) is asleep and all things considered. It really is (Reddick’s) dream come true. But when you live with someone and you do all this day-to-day with him, it becomes your dream, too.”

Confidence and momentum. He always had the first.