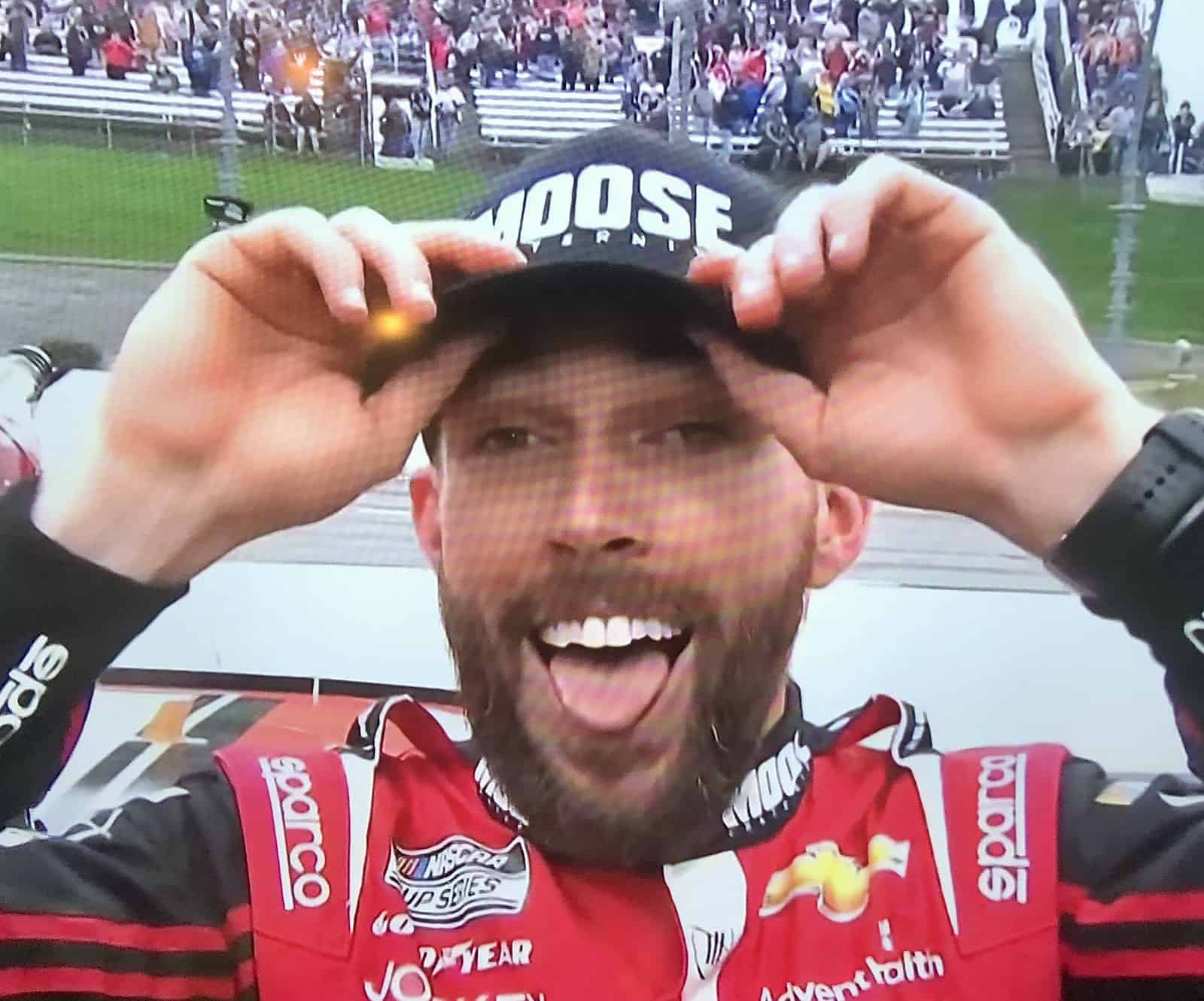 Ross Chastain celebrates after earning a spot in the Championship 4 at Martinsville Speedway. (Photo: Daniel McFadin)

His first warning shot came on March 27, when he moved AJ Allmendinger, and by happenstance Alex Bowman, out of the way on the last lap at Circuit of the Americas to win his first NASCAR Cup Series race.

The second, and more relatable, warning came on July 31 at the Indianapolis Motor Speedway road course.

Were the rules surrounding the road course’s turn 1 escape route vague enough to potentially take advantage of on a late-race restart?

They were for Chastain.

It didn’t work out, but the move got everyone’s attention.

In 10th place, Chastain needed to make up two spots to advance into the Championship 4.

After a summer spent keeping his head down, in hot water following high-profile incidents with Denny Hamlin, Martin Truex Jr., Kyle Busch, Christopher Bell and probably someone else I’m forgetting, the Chastain we have come to know over the last five years emerged from hibernation.

Most racing decisions are made in the moment or calculated over the course of the race.

That was still the case Sunday.

At just the right moment, out of contention for the Championship 4 and with Hamlin in by just a few points, Chastain unlocked a core memory as the white flag dropped.

Put the pedal to the floor, ride the outside wall at full speed… and hope for the best.

“Played a lot of NASCAR 2005 on the (Nintendo) Game Cube with (brother) Chad growing up,” Chastain said. “You can get away with it. I never knew if it would actually work. … I mean, I did that when I was 8 years old.”

On Sunday, in a moment and at a track where no one was expecting, Chastain pulled it off.

‘@RossChastain said he’ll leave it up to the Internet to decide what to call this move.

What do you say, fans? pic.twitter.com/GA0rwW9nim

“Asked off of (turn) 2 on the last lap if we needed it, and we did,” Chastain said. “I couldn’t tell who was leading. I made the choice, grabbed fifth gear down the back(stretch). Full committed. Basically let go of the wheel.”

I’d make a “Jesus Take the Wheel” reference, but this column isn’t about Ty Gibbs.

Instead, it’s about Chastain riding Martinsville’s outside wall at an eye-popping speed to go from 10th to fifth in two turns (make that fourth after Brad Keselowski’s disqualification), and edging out Hamlin to lock himself in the Championship 4 for the first time.

Even Hamlin, who promised after their World Wide Technology Raceway run-in to get revenge when it mattered the most, was impressed.

“Brilliant. Certainly a great move,” Hamlin said. “When you have no other choice, it certainly is easy to do that. But well executed.”

Weirdly, only a year removed from his own Leeroy Jenkins moment, Larson took a very different route.

“It’s just a bad look,” said Larson. “I’m embarrassed that I did it at Darlington and probably if I didn’t do it last year people wouldn’t even think to do that. I embarrassed myself and glad I didn’t win that way.”

Joey Logano, who will have to face Chastain for the title next weekend at Phoenix Raceway, was both impressed and doesn’t want to see that move ever again.

“If that doesn’t make SportsCenter top 10 plays, I don’t know what does. … Spectacular as it was, now the box is open,” Logano said. “There needs to be a rule against this one. I don’t know if you want the whole field riding the wall coming to the checkered flag.”

Bowman, who will make his return from a concussion next weekend after five weeks out and a Sunday spent counting his Martinsville hot dog consumption, is already running through scenarios.

So does the whole field do that on the last lap next year? Can the car handle it for a whole lap? 2 laps? So many questions 😂 pic.twitter.com/XABjGC4KQX

The day wasn’t even over before Chase Briscoe, one of Chastain’s former playoff competitors, tried the maneuver in a more current video game.

We gotta get the realism back into these video games…. pic.twitter.com/EnyFozYa0I

Even Will Power, arguably one of the best modern IndyCar drivers, was impressed.

Whatever your opinion, it doesn’t matter.

Chastain will compete for a Cup championship.

“It’s destroyed,” Chastain said in disbelief as he watched his car pushed by him on pit road afterward. “The brakes are knocked out of it, the steering’s all messed up, my head’s a little scrambled as well. But it was worth it.

They, and all of us, have been warned.

2022 is Daniel McFadin’s ninth year covering NASCAR, with six years spent at NBC Sports. This is his second year writing columns for Frontstretch. His columns won third place in the National Motorsports Press Association awards for 2021. His work can also be found at the Arkansas Democrat-Gazette and  SpeedSport.com. You can hear more from him on his podcast, Dropping the Hammer.

I enjoyed your take on the Chastain wall-riding finish.

We had Earnhardt’s Pass in the Grass at Charlotte and now we have Chastain’s Balls to the Walls finish at Martinsville. Both will be timeless classics.

I for one loved watching him not lift a bit. Did y’all hear that crowd. Every sports channel will be showing this over and over, and sports fans who don’t watch nascar are watching this with awe. Carl Edwards versus Jimmie was nothing like this. Ross gave it his all and went for it. Did you hear Jr and the awe in his words. Wow