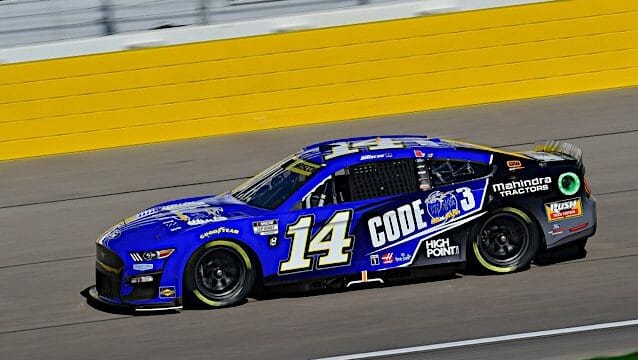 After going a lap down in stage one of Sunday’s (Oct. 16) NASCAR Cup Series playoff race at Las Vegas Motor Speedway, Briscoe thought he was within reach of winning his way into the Championship 4.

On a restart with 35 laps to go, the only obstacle in front of him was the No. 31 of Justin Haley, who was on two fresh tires in a pit strategy bid to win the South Point 400.

“I was kind of just making him burn his stuff up and we’d had such a big gap on the guys behind us I was trying to make him make a mistake,” Briscoe said. “I kind of found something in (turns) 3 and 4 and I felt like I was probably 3 laps away from passing him.”

“You can’t control the cautions.”

There were two in the final 35 laps.

With 27 laps left, Daniel Suarez went for a spin off turn 4 after being cut off by Tyler Reddick. Then with 22 laps to go, Landon Cassill spun in turn 3.

“If the (first) caution doesn’t come out when I was running behind (Haley) I was pretty confident I was gonna win the race,” Briscoe said after he placed fourth for his fifth top five of the season.

Two things happened under the final set of cautions that spelled doom for Briscoe’s chances at his second career Cup Series win.

Under the first, Joey Logano led a group of cars onto pit road. With fresh tires, which Briscoe didn’t know about, Logano restarted 13th.

Then on the last restart, Ross Chastain elected to restart third in the bottom lane in the row behind Briscoe and Haley.

“When (Chastain) picked the bottom, I knew I was probably going to put three-wide and that was the thing that killed me,” Briscoe said.

That’s exactly what happened on the restart, as Chastain squeezed by Briscoe and Haley in turn 3.

“Between me, (Chastain) and (Haley), whoever got the lead was going to be able to kind of drive away just because this car seems like if you’re that front car you can just haul the mail,” Briscoe said. “When (Chastain) got the lead, I knew I was pretty much done from trying to win the race probably. (Logano), I didn’t realize he was on fresh tires at the time. So he got to me, I just let him go and hoped and kind of like me at Bristol (dirt in the spring), like hopefully they go up there and they would wreck each other and I would get lucky.”

Instead of getting lucky, Logano passed Chastain cleanly with three laps to go and ran off to the win and clinch a berth in the Championship 4.

See also
Kyle Larson: Bubba Wallace 'Had a Reason to be Mad,' Made 'Mistake' with Retaliation

Briscoe entered the race as the last driver on Round of 8 playoff grid. He now leaves Las Vegas in sixth, nine points behind the cutoff.

It’s somewhat impressive given how Briscoe started the race off with a terrible handling racecar and was lapped in stage one. But with great pitstops and receiving the lucky dog at one point, Briscoe produced one of his best races finishes of the season.

Even though he’s proud of what the No. 14 team was able to produce on Sunday, he’s “not impressed” with how his playoff run has gone overall, despite making it to the Round of 8 when drivers like Kevin Harvick, Kyle Busch and Kyle Larson didn’t.

“I’ve known all year long that when we put it together, I mean really, we only put three races together up until the playoffs and that was Phoenix (which he won), Bristol dirt and Charlotte,” Briscoe said. “I’ve made a lot of stupid mistakes truthfully and as a team, we tried some stuff that we thought was going to be better and we just weren’t nearly as aggressive as we should have been on a lot of things, even from a strategy standpoint.”

Luckily for Briscoe, the next stop in the Round of 8 is one of his favorite tracks: Homestead-Miami Speedway. He has two wins at the 1.5-mile oval, one in both the NASCAR Xfinity and Camping World Truck series.

“I feel like that’s one of my best race tracks, so feel really confident about going there and battling for the win,” Briscoe said.

Larson is in the owners championship. Blaney is not eligible.

Much like when you asked this question a few weeks ago (about Bubble), it’s the same answer.
Larsen is still eligible for the Owners Championship. Come on man, get with the program.

Why should that matter? The driver and owner are different titles. Besides,Blubber was taking Kurt’s place as an eligible driver.Although the real reason was to keep Blubber from disappearing on the TV broadcasts. Once again it is NA$CAR “logic”,

Briscoe has been punching above his weight the whole season. Regardless of how the next 2 races turn out, the entire team can hold their heads high.