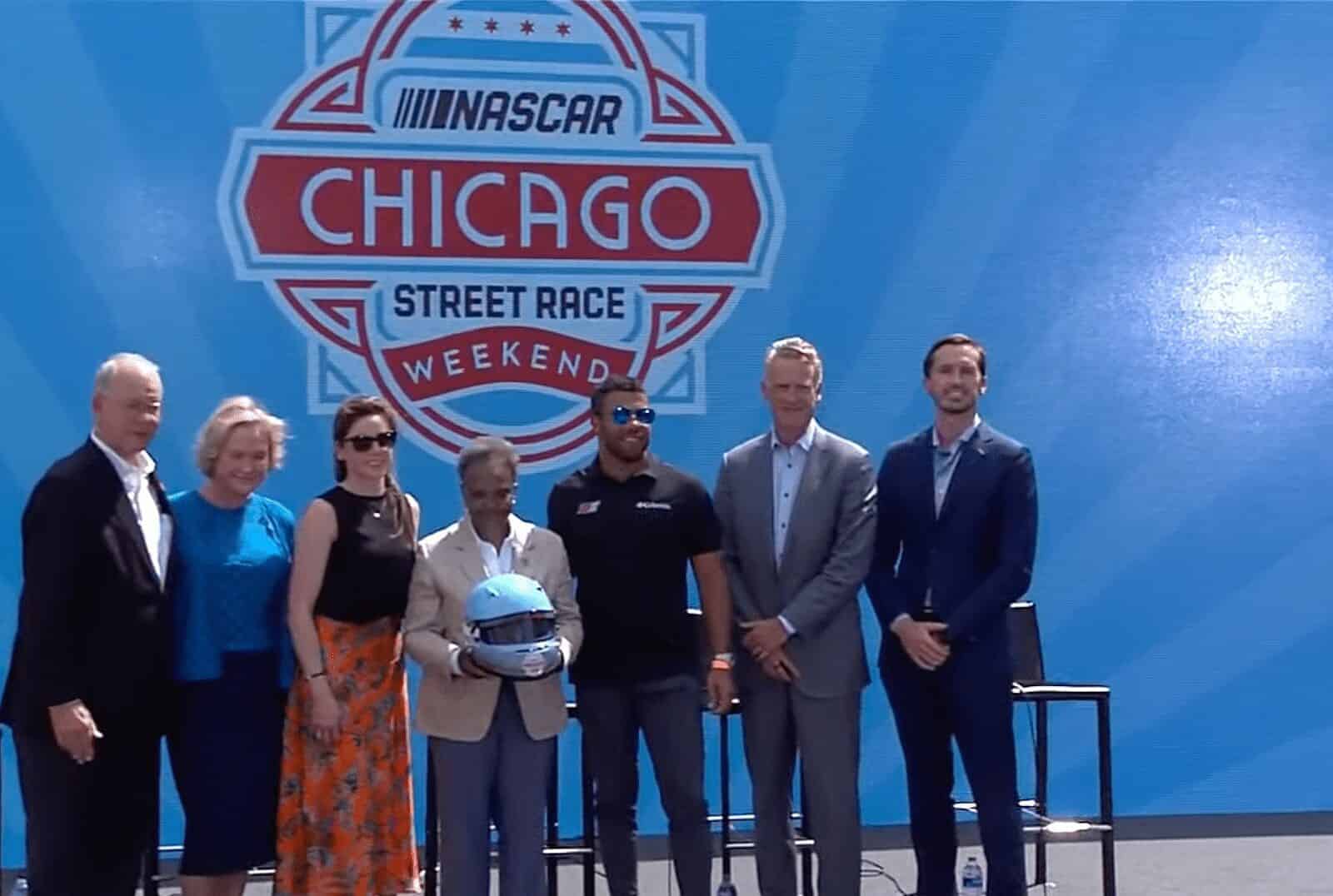 That was the word of the day Tuesday (July 19) in downtown Chicago.

It was uttered by both Ben Kennedy and Bubba Wallace during the announcement that made the NASCAR Cup Series’ eventual arrival on the streets of America’s third-biggest city official.

NASCAR proved it could do this years ago.

For those who don’t remember, NASCAR sent the Xfinity Series to Montreal from 2007-12 to race at Circuit Gilles Villeneuve, which is considered a hybrid of a street course and a natural road course. Years before that, the NASCAR Southwest Series held multiple street course races in Los Angeles.

However, we’re just now getting around to the true-blue street course with the Cup Series.

You can blame it partially on the five-year sanctioning agreement NASCAR had with tracks that locked in race dates. That didn’t end until 2020, around the same time International Speedway Corp. was absorbed by NASCAR and Speedway Motorsports became a private company again.

In the two years since, we’ve gotten Cup races at Circuit of the Americas, World Wide Technology Raceway outside St. Louis, Bristol Motor Speedway dirt, the Indianapolis Motor Speedway road course, Nashville Superspeedway, the Clash at the L.A. Coliseum and Road America, the last of course falling victim to the Chicago race for the time being.

“I’d say of all the changes, this is our boldest change in the schedule,” Kennedy, NASCAR’s senior vice president of racing development and strategy, said. “We’ve said […] that we want to be bold and innovative, and we think about new venues and new concepts that we’re going to. This is No. 1 on the list for us right now, and it’s certainly going to be the most anticipated event of our season and one of the biggest sport events in our country in 2023.”

Kennedy said the genesis of the 2023 race came in late 2019, around the same time NASCAR started the process that led to the Los Angeles race.

That included a visit to Chicago to scout Soldier Field as a potential site for the stadium race.

Now, Soldier Field may be visible through the windshields of Cup cars as they drive toward Turns 3 and 4 on the 12-turn 2.2-mile street course.

Here's a graphic of the proposed track layout for #NASCAR's Chicago street course.

The idea of NASCAR’s Chicago street course race was planted in our minds 13 months ago with the eNASCAR iRacing Pro Invitational Series event held on a virtual version of the track.

It was around this time that the talks between NASCAR and the City of Chicago began, which led to Tuesday’s news.

It might be unbelievable for the roughly 100,000 fans who attended the last two years of July 4 weekend Cup races at Road America, the privately-owned track in Elkhart Lake, Wis.

Kennedy said it was “fair” to ask what message NASCAR had for the people who showed out in historic numbers to support the races at the iconic track. Now Cup won’t be back in 2023. This, after Phelps had previously said attendance would factor into scheduling decisions.

“I think part of the calculus of the decision [was] certainly [a] similar kind of market, as you think about the proximity of the two venues from each other. Then I think it’s also important as we think about the number of types of tracks we have on the schedule. Something that we’ve heard is kind of the number of road courses, continuing to add road courses on the schedule. It’s important that we don’t oversaturate ourselves.

“I won’t say that’s the emphasis to the decision. There were a number of things that went into that decision.”

Kennedy earlier said Cup not returning to Road America was “not a financial decision at all.”

NASCAR’s Ben Kennedy says moving a Cup race from Road America to streets of Chicago was not a financial move. pic.twitter.com/bjae9EUfPR

“It’s more so being in a downtown location like this in a major market like Chicago,” Kennedy added. “And then, again, doing something for the very first time.”

For Wallace, whose 23XI Racing team co-owner Michael Jordan is a Chicago icon from his NBA days with the Bulls, there are a lot of “unknowns” with the street course race.

“This is monumental for our sport,” Wallace said. “If you’ve been following my journey for the last little bit, I’ve always said the unknowns is what excites me.

“I don’t know what to expect going into this deal. I know that these guys got a lot of work to do and the city does, too, to get it ready. […] Being in this city, bringing NASCAR to this demographic, we talk about how representation matters, and I think exposing this sport to this area, downtown, with so much to do around while the race is going on is super important.”

At the end of the day, that might be the only thing that matters around the race, whether it lasts one year or the reported three-year length of the deal.

As long as the event is held without any high-profile mistakes, as long as people who’ve never before been interested in or had access to a NASCAR Cup races are talking about it and curious about it, it’s a win-win scenario.

“We need to make sure it’s a good event,” Chase Elliott said two weeks ago. “The drivers might not like the track, and it might not be ideal for us. But when you’re in the middle of the city and have the ability to draw that kind of a crowd out to your race, we better make sure it’s put on well.

“Done at a very high level, people have a good spot to watch the race from, things to go do and make it an event. That’s what it needs to be. It needs to be an event. And I think as long as it’s that and it’s done well, it will be a success whether the drivers like the track or not.”

2022 is Daniel McFadin’s ninth year covering NASCAR, with six years spent at NBC Sports. This is his second year writing columns for Frontstretch. His columns won third place in the National Motorsports Press Association awards for 2021. His work can also be found at SpeedSport.com. And you can hear more from him on his podcast.

If you think about it, bubba’s dad and nascar’s diversity program gave bubba a huge leap up the ladder that many others didn’t get. Why is bubba in this story !

The Spotters Stand
Reply to  Echo

You could ask the same question as to why so many fans who complain about Bubba comment about him all the time in these articles when he’s not mentioned. He’s in this story due to his owner.

Disgusting. I’m embarrassed I once hoped Ben Kennedy “got it” and might save the sport. I notice they aren’t racing on the South side – I wonder why?

They are really going to do a street race in Chicago, unbelievable.

Can it be worse than th LA Colusium race?

I wrote that there was too much talk about Chicago for it not to happen. More proof that Brian’s still calling the shots. Decisions based on $$$$$$$$$$ above all else! They will run it at night using the street lights starting at 9 EST to help the west coast viewer.

I hope you mean 90 degree turn.

What a joke. Mentioning Bubba for what reason? Is he the go to guy for quotes now since he is a “star?” Street course, what a joke….. just one more nail in the coffin of WOKE CRAPCAR.

The Spotters Stand
Reply to  jdquick

Echo
Reply to  The Spotters Stand

I want to go on record that this is a horrible idea. You have the number of murders in Chicago and the risk a fan takes if making a wrong turn and ends up in a gang war. I know, they are downplaying it. They have the marathon, the Cubs, Bears, Bulls, McCormick Place shindigs, I could go on. But look at the FBI crime statistics listing violent crimes, murders and shootings. I know Phelps, O’Donnell, and the ilk propping up Ben Kennedy’s ideas. They got lucky in LA. Let us hope some driver isn’t chasing some lady down Michigan avenue, lured to a dark corner, and eliminated from competition permantly.
I heard the number one and three shills for the sport in the Media, Moody (1) and Pistone (3) saying the crime rate is not that bad in the area of the race.
You may even be able to go to the old google machine in find out they are totally lost.
I hope nothing happens. It probably will not, but is the risk worth it?

Bring your bullet proof vest. Did Bubba win a championship or something? He seems to be the big star in all the media.

It’s likely because his team owner is kinda a big deal in Chicago ;)

Bill B
Reply to  The Spotters Stand

Then maybe his team owner should have been there.

Denny didn’t have time and the other one is busy losing money at the tables. Terrible gambler.

David Wilson, the head of Toyota Racing Development summed it up nicely, stating that the racing may not be “captivating” on the Chicago street course, but they “have to think bigger than just the race”, they “want to put on a show”. That’s all NASCAR has become anymore, a show. The “Chase”, the “Lucky Dog”, “Have at it boys”, it’s not about racing anymore. NASCAR’s just about putting on a show now.

Years ago I crewed for a Trans Am team, and we raced on quite a few street courses. I hated most of them. As a spectator you can’t see much, as a driver it’s near impossible to pass, and as a crew member you have a lot of work to do repairing damage as a result of contact with the walls, other cars and manhole covers. I’ve seen how much damage is caused when a 2500 lb Trans Am car hits a “Jersey Barrier” at 120, I hope a 3500 lb Cup car can’t go through one.

Last edited 6 months ago by gbvette
5
0

There’s a reason Brian called it his “product.”

If they miss a turn they might never be seen again.