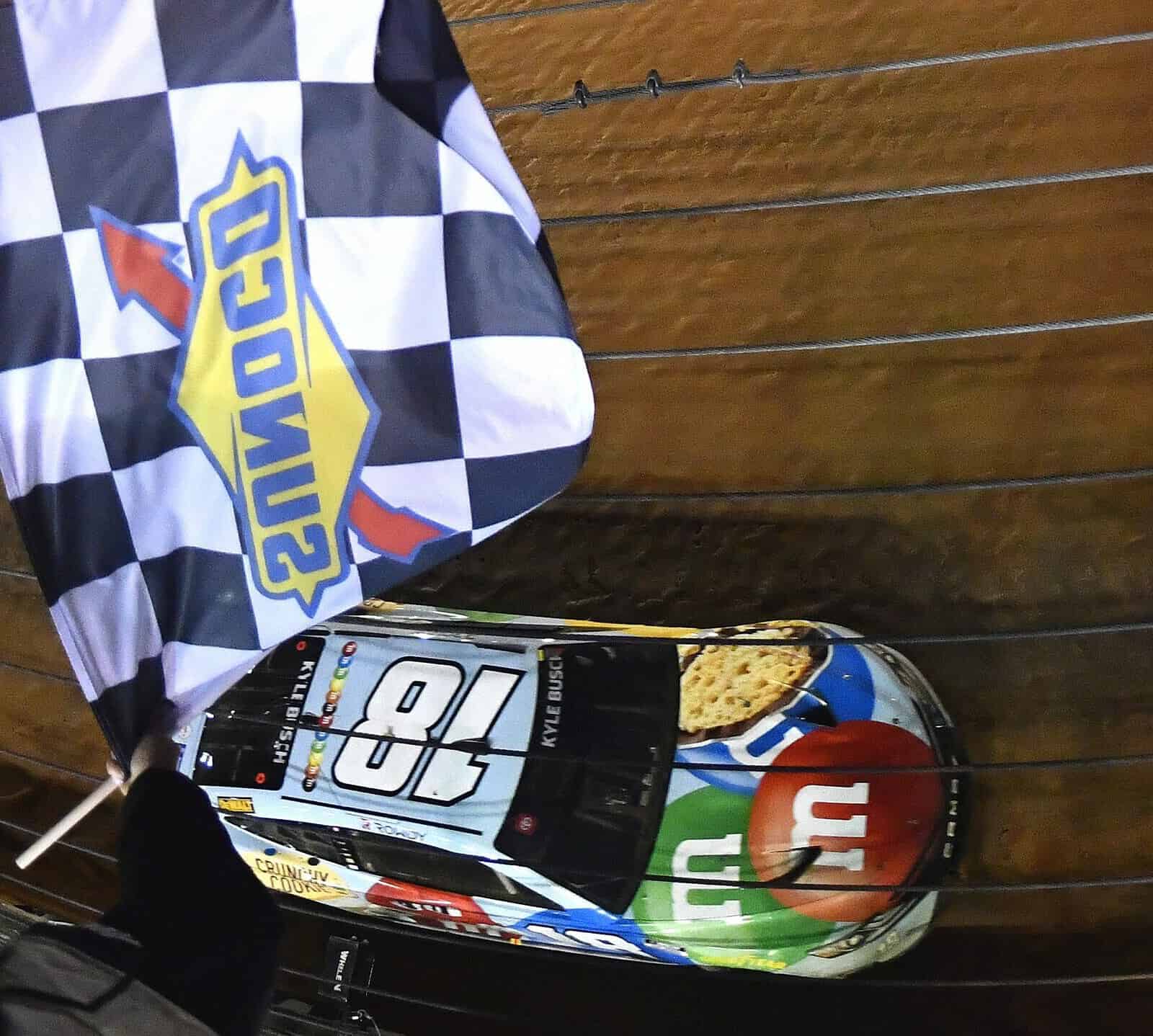 Two young drivers dueled for the win, one of them still in search of his first Cup victory, until they made contact on the last lap and went spinning to the apron.

An aging veteran who hadn’t won since last June materialized out of the mist, swooping in to win by just .330 seconds over one of the young guns.

Except, in none of those events was a dirt racing surface a factor.

So of course Kyle Busch won it.

As part of its “Greatest Races” series, it chose to air a condensed version of the 2007 Sprint Cup race at Bristol. For those not around then, it was the debut of the infamous winged car that will forever and always, for better or worse, be referred to as the “Car of Tomorrow.”

Busch won in an overtime finish, edging out Jeff Burton.

Then, at the tail end of his Victory Lane interview, Busch threw cold water on the CoT’s big debut despite it having put on a pretty good show at the race’s end.

“I’m still not a very big fan of these things, I can’t stand to drive them, they suck,” Busch said.

Whether that poisoned the waters over the public’s perception of the CoT for the duration of its lifetime could be debated, but it certainly didn’t help.

A week out from the second Bristol dirt race, Busch, who has minimal experience racing on dirt and finished 17th in the inaugural Bristol event, shared his thoughts about Cup cars racing on dirt.

“Cut the cord,” Busch observed. “As Richard Petty said, dirt takes our sport backwards … It’s just a mess. Our cars, the tracks, it’s not indicative to putting on a good dirt show.”

Adding on top of this, dirt ace Kyle Larson contributed his two cents later in the week, claiming if NASCAR holds dirt races with cars that have windshields, it’s not a “true dirt race.”

Harsh words from some of the sport’s best on a race that happens once a season.

Then came Sunday night in front of the largest crowd the spring Bristol race had seen since at least 2018.

Despite some mud issues in the first 10 laps (which was also seen in the first Truck Series heat race Saturday before being resolved), two rain delays and confusion over scoring rules on the part of race teams … it was a really fun race to watch that thankfully went the distance.

Busch even allowed himself a moment to appreciate the win, as the remaining fans booed him, a familiar site at Bristol and, well, a lot of places.

“It doesn’t matter how you get them, it’s all about getting them,” Busch said, before referencing the aftermath of the 1999 Bristol night race while echoing his Chicagoland 2018 post-race interview. “Man, I feel like Dale Earnhardt Sr. right now. This is awesome, I didn’t even do anything. Just a testament to our team. … I can win on any surface at Bristol. Bring it on, baby.”

Later, Busch added that there were “caveats” to him being able enjoy his victory.

Unlike 2007, Busch’s “caveats” had more nuance other than “they suck.”

“I don’t know if the good outweighed the bad,” Busch said. “But the biggest one is they did a better job with the track this year for sure.”

“But the biggest thing that hinders me from enjoying this is just the application,” Busch said. “We’re trying to do something that isn’t applicable, in my opinion. I mean, the first 10 laps of the race, everybody is shooting mud off, we’re covering everybody’s grilles. Our windshields are covered with the dirt going off the windshield, stuff like that.”

Again, that quickly was resolved like in the Truck heat races.

That seems … like something a racer would want? Also, it sounds like a lot of the positive feedback drivers have given about the Next Gen car in the last three months.

“When you’re in a dirt car, I’ve now run micros, dirt late models, a few different types of vehicles on dirt,” Busch said. “When there’s grip, it’s grip and rip. You are driving the heck out of that thing. Makes you breathe hard. This thing here, you’re just not breathing because you’re so tensed up of not crashing. It’s just the application.

Meanwhile, the dirt ace and defending Cup champion who said Cup cars with windshields wouldn’t put on a “true dirt race” had even softened his tune.

“It was fun, it felt like a dirt race,” Larson said. “Obviously, I think there’s some small tweaking that could be done to make it even better.

Kyle Larson: “It was fun. It felt like a dirt race.” pic.twitter.com/w1KKjxkcXf

The NASCAR Cup Series is trying to do something it hasn’t done in 50 years.

You’d be hard pressed to find anyone who thought its return to dirt — specifically on a track like Bristol — would turn out perfect in 2021, and it wasn’t.

But NASCAR and Speedway Motorsports learned and adapted with the added weight of having to put on the second dirt race with the Next Gen car.

I’m not a dirt racing guy and would never pretend to be one. But the exercise in comparing what NASCAR Cup cars or Trucks can do on dirt to “natural” dirt racing vehicles seems futile.

They’re not the same and I personally don’t want them to be.

Thankfully, it’s getting better. And Sunday, “caveats” and all, we got a Bristol race to remember.

The numbers are in.

The second Bristol dirt race was a success. Airing on Fox, the race earned 4.007 million viewers. The most viewers for any Bristol race in six years.

Even before the ratings came out, NASCAR’s Steve O’Donnell told SiriusXM NASCAR Radio that the sanctioning body still had dirt racing in mind.

2022 is Daniel McFadin’s ninth year covering NASCAR, with six years spent at NBC Sports. This is his second year writing columns for Frontstretch. His columns won third place in the National Motorsports Press Association awards for 2021. His work can also be found at SpeedSport.com and FanBuzz.com. And you can hear more from him on his podcast

Just one more tricked up race to try to accomplish something. Just like the chase. What a waste of a good racetrack. They ruined it when they repaved it and the cars couldn’t adapt to it so they started to use the PJ1 crap. If Nascar wants a dirt race, go to a real dirt track and race real dirt cars. This is only a pretend dirt race with cars built to race on a solid track. Old Bristol fans are turning in their graves over crap like this at Bristol.