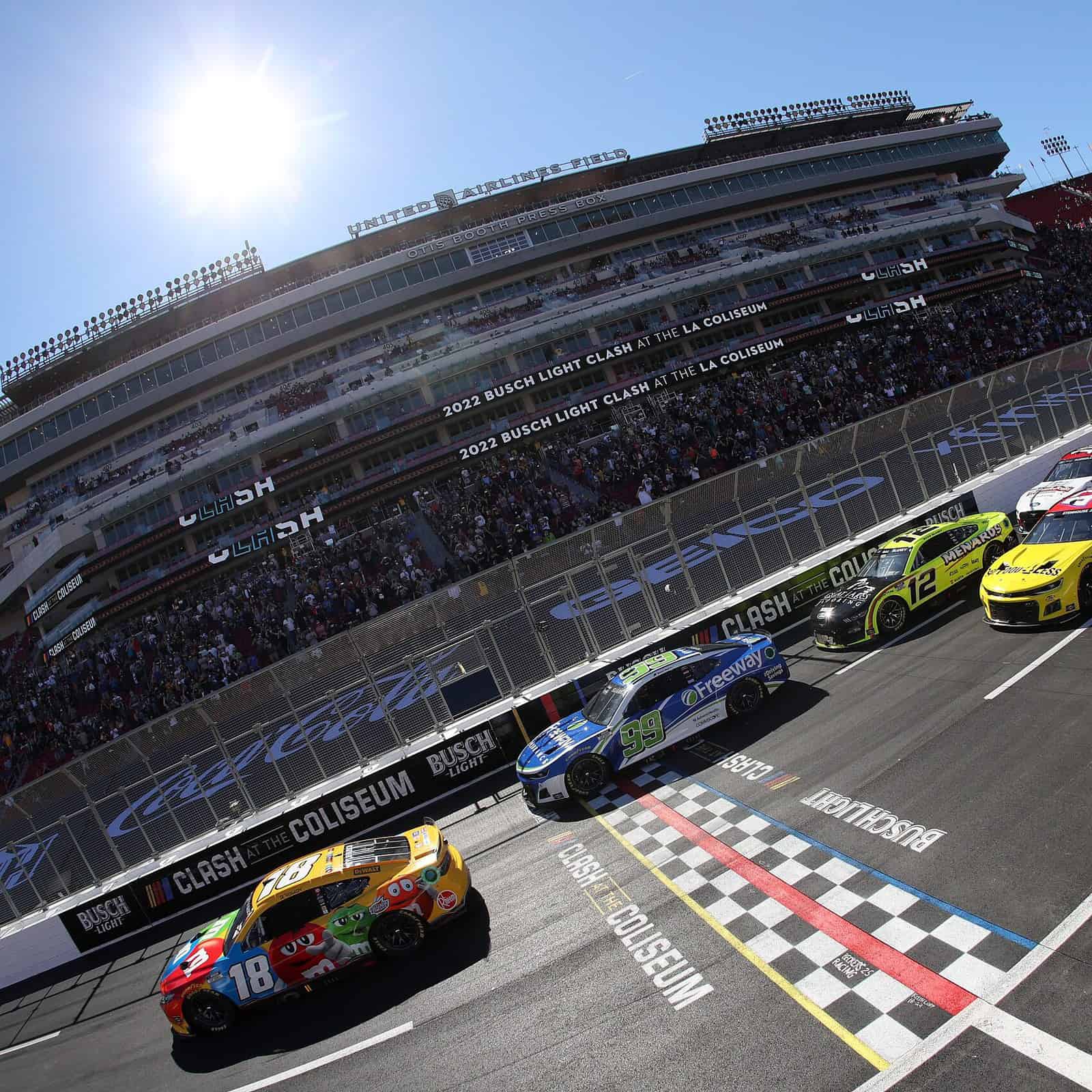 NASCAR’s inaugural Busch Light Clash at the L.A. Coliseum was set by a full afternoon slate of six abbreviated races. The initial four 25-lap heat races featured the 36 drivers divided into groups of nine, followed by dual 50-lap last chance qualifiers. Additionally, the top driver in 2021 points that did not qualify via a heat or last chance race was awarded a provisional spot in the feature.

The results of each heat set the lineup for the first 16 spots in the main event, with the winner securing a spot in the top four, the runner-up starting between fifth and eighth, and so on. 23 total drivers out of the 36 will start the main event on this temporary 1/4-mile oval.

After qualifying on the provisional pole Saturday (Feb. 5) with the fastest time in the field, Kyle Busch scooted away from Daniel Suarez and cruised to a flag-to-flag victory in the opener while a fierce battle between Ricky Stenhouse Jr., Denny Hamlin and Ryan Blaney unfolded for the transfer spots.

The three battled for most of the second half of the race, allowing Busch and Suarez to race without much conflict. As the laps wound down, Blaney moved Hamlin out of the way and set his sights on Stenhouse for third, though despite contact, the No. 12 couldn’t get by. Blaney transferred anyway, along with Stenhouse, while Hamlin, Ross Chastain, Todd Gilliland, Aric Almirola and BJ McLeod dropped to the last chance qualifier.

Tyler Reddick rolled off on pole by virtue of a fast Saturday time and also led flag-to-flag while chaos unfolded in his rear-view mirror. Cole Custer, starting second, had the most significant issue so far for either race when he drifted up the track and dropped multiple positions, while rookie Harrison Burton fell to Bubba Wallace for second.

Things are getting HEATed🔥🟢 pic.twitter.com/wdK3noqidh

Burton kept dropping while Chase Briscoe then made his way into second, while Wallace also slid back in the running order. Reddick’s dominance was followed by Briscoe, Austin Dillon and Custer at the line; Burton, Wallace, Alex Bowman, Martin Truex Jr. and Brad Keselowski all ended up on the outside looking in. Keselowski was never a factor in the second heat race, trailing the leader by as many as 10 seconds late in the event, while Truex elected to sit out the LCQ and take the provisional, locking the No. 19 into the finale.

.@MartinTruex_Jr says on FOX he's going to not run the LCQ and take his provisional and make the main.

Provisional goes to the driver who finished highest in 2021 points and has not already qualified. MTJ was 2nd in points last year.

After an impressive qualifying time the night before, Justin Haley sat on the pole while 2020 Cup champion Chase Elliott sat to his outside.

Haley was rarely challenged in the same vein as Kyle Busch and Reddick, more or less cruising to the win. William Byron, Christopher Bell and Elliott followed him and locked themselves into the main event, while Haley’s Kaulig Racing teammate AJ Allmendinger couldn’t pass his way into a transfer spot.

How about Justin Haley?! He wins from the pole in heat three and will start third for the main event later this afternoon.#NASCAR #BuschLightClash pic.twitter.com/BPl61o4OGl

Along with Allmendinger, Kevin Harvick, Chris Buescher, Corey LaJoie and Cody Ware were forced into the last chance qualifier.

Joey Logano kept the trend of polesitters winning each event, outracing defending series champ Kyle Larson while utter mayhem unfolded in the back half of the field.

Ty Dillon brought out the very first caution of the afternoon when his No. 42 lost power.

That was followed by a scrum between Landon Cassill, Austin Cindric, Erik Jones, Kurt Busch and Ryan Preece for the final transfer spot.

Jones ended up the beneficiary along with Logano, Larson and Michael McDowell. That wasn’t before some contact, though, when a bump from Preece sent Jones’ No. 43 into Cindric. Cindric’s No. 2 was the first spin of the afternoon.

Things started quietly in the first last chance qualifier, with Hamlin rolling off on pole ahead of nine other cars, but the first serious accident of the afternoon happened soon after as Almirola went sliding into the wall. The No. 10 did so off the bumper of Gilliland, and once he clambered out, Almirola stared down the No. 38 when the field cycled around.

Hamlin retained the lead and set sail, while Harvick made his way into second. Allmendinger successfully ran down and dueled Chastain for the third spot while Cody Ware quietly approached the top five.

The rest of the field was only able to watch as Hamlin, Harvick and Allmendinger locked themselves into the feature. Allmendinger’s finish placed both Kaulig Racing cars in the main event as the team starts its first full-time Cup season on tour.

Polesitter Bubba Wallace pulled away early as second-place Cindric dropped back, surrendering the transfer spots early on to Bowman and Kurt Busch. That pair closed in on Wallace, as Preece and Burton made contact while battling behind them and Ty Dillon made significant contact with Keselowski.

The trend continued up front as Bowman and Wallace rubbed fenders. Behind them, the first caution flew for Dillon moving Burton out of the groove. Preece made slight contact with Burton’s back bumper although all drivers were able to continue.

On the restart, Wallace and Bowman traded spots and paint and everything in between, but the No. 48 went wide and lost multiple spots as Kurt Busch inherited second. The 23XI Racing duo ran 1-2 and swapped positions, the No. 45 of Busch out front when a caution flew for Preece’s spin after getting pinched between Cassill and Cindric.

Dillon jumped ahead of Busch on that restart but was forced to surrender his second-place spot and drop to the back of the field. NASCAR determined he beat Busch to the line and had to serve this exhibition equivalent of a black-flag penalty.

Another yellow was displayed soon after when Cassill and Keselowski both spun, then another when Dillon sent Cindric for a loop.

That bunched the field up for a wild finish. Contact up front on the subsequent restart dropped Kurt Busch down the running order as Wallace was passed by Burton for the lead. Directly afterward, Wallace was sandwiched between a Dillon-sent Cindric and Busch, which sent the latter into the wall and out of the race.

Cindric was involved in another caution when he was spun on the next restart an incident that eliminated Bowman. That was followed by a Burton spin which appeared to take him out of the running.

The race finally concluded when Dillon stayed out in front for two laps, winning the qualifier after all the chaos. Preece and Wallace transferred as well, while Burton, Keselowski, Cindric and Cassill joined Bowman and Busch in elimination… or so everyone thought.

Dillon was later disqualified after NASCAR determined he jumped the final restart, which opened the door for Burton to move on into the main event.

“Disappointed with the result but pretty happy with the run,” Dillon told Frontstretch’s Zach Sturniolo. “I was rolling and knew I needed to get a good launch. And I’m sure I just got to the throttle a little bit before the zone. I was just trying to make the most of it … the last four restarts, the leader got punted, and I didn’t want to be that guy…

“They got to make a call, and I’m not here to badmouth them at all.”

Spoke with @tydillon following a hectic LCQ that saw him cross the start/finish line first, but results in him missing the show.

Dillon on the penalty, contact and emotions of missing the #NASCAR #BuschLightClash: pic.twitter.com/h6RdekeWTx

The feature Busch Light Clash at the Coliseum is set to take the green flag shortly after 6:30 p.m. ET Sunday afternoon.

My first reaction to this format and style of racing is, what a load of crap. It appeals to the lowest common denominator, wrecking the guy in front of you to gain a position. Rewarding that kind of driving is not in the best interest of the sport as it turns it into a demolition derby.

My second reaction is that since it’s an exhibition race with no ramifications to the rest of the season, what the hell. Let ’em beat the hell out of each other. The risk of serious injury is low since the speeds are that high. Still, the end result seems kind of arbitrary.

Exactly my sentiment, Bill. When the 4th place car can push 3rd and 2nd up into the leader and send him spinning, that makes it not racing so much anymore doesn’t it? It makes DQ’ing the leader for a jumped restart even more ridiculous when 4th place can spin the leader without repercussion. It becomes a street brawl demolition derby. They could at least hook trailers to ’em and make them run figure 8 – now that’s entertainment!

LMAO on that last sentence. GOOD ONE!!!

Also, it’s bad enough that they have to have a half-time break in the middle of a 150 lap race, but then they pick an entertainer that will not appeal to what few hardcore fans they have left. I wonder how many will change channels and never come back for the rest of this so called “race”.

I didn’t see very many NASCAR driver t-shirts in that crowd.

No, I can’t say I saw any either but I can’t say I paid much attention to the crowd. I imagine a good many of those at the track got comped or severely discounted tickets.

I hope they were comped! Watching that was like watching my 90 year old grandfather trying to imitate John Travolta doing his Saturday night fever dance. Embarrassing.

I switched to a rerun of Big Bang Theory, but I did return once the “half time” show was over.

NASCAR doesn’t care about the hardcore fan, and hasn’t in many years. They figure the few they still have will continue to watch, but even if they don’t, the hardcore fan is not the future.

The sport needs new fans, they’re a lot more important to NASCAR right now. If they can suck in some new (read younger) fans with crappy performers and fabricated wrecking, instead of actual racing, then it’s a win for NASCAR. The few hardcore fans they do lose, are mostly older, and aren’t part of the all important 18-30 something marketing demographic that drives TV ratings and marketing budgets. NASCAR’s aim for the last 15-20 years, with things like the “Chase” and Bristol dirt race, has been to become the WWE of auto racing.

NASCAR doesn’t just need new fans! They need fans that stick around and they don’t exist.

Bill B – remember, they don’t care about us. we’re dinosaurs.

Yeah I know. Still, if they wanted to appeal to a younger demographic they could have found someone that became famous in this century.

The “SHOW” was entertaining. Perfect for recording and ff through the commercials. Roush cars are still slugs.