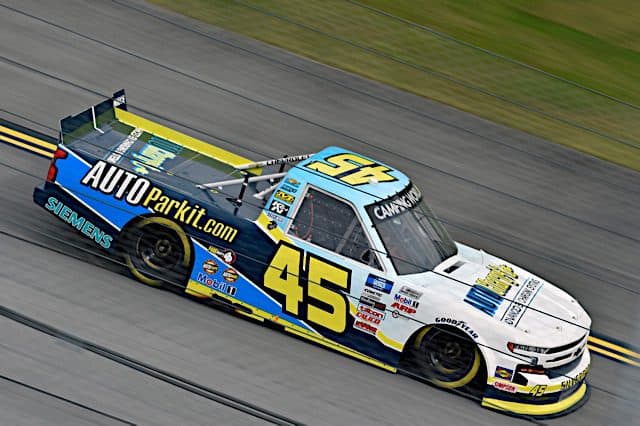 As he prepares to make his ninth career NASCAR Camping World Truck Series start at Phoenix Raceway, Lawless Alan has a full-time ride for next year.

Alan will up his slate to a full-time schedule driving the No. 45 Chevrolet, Niece Motorsports announced Nov. 4.

Alan’s rookie campaign will be primarily sponsored by AUTOParkit, AUTOChargit and Siemens. He’ll also have GarageFloor 24 as a secondary sponsor.

Alan joins Carson Hocevar and Dean Thompson as the three full-time drivers for Niece next year announced thus far. Hocevar is currently in the midst of his rookie year and Thompson will join Alan competing for Rookie of the Year honors next year.

“I am very excited to have the opportunity to run for a championship with Niece Motorsports next year,” Alan said in a team release. “Niece Motorsports is an organization that regularly contends for wins, and I am looking forward to contributing to their winning tradition. I am very thankful to have the opportunity to work with Niece and I’m really looking forward to driving the No. 45, AUTOParkit 2022 Chevrolet Silverado RST.”

“This is another huge piece of the puzzle to fall into place for our organization next season,” Niece Motorsports general manager Cody Efaw added. “Lawless brings a lot to the table. He’s raced in a lot of different disciplines, and I think that will really pay huge dividends for him next year. Our team is already working hard to prepare for next season. We’ve got a ton of young talent on our roster next year with Lawless, Dean and Carson. We’re looking forward to it and ready for the challenge.”

Alan has a career-best finish of 18th at Bristol Motor Speedway.