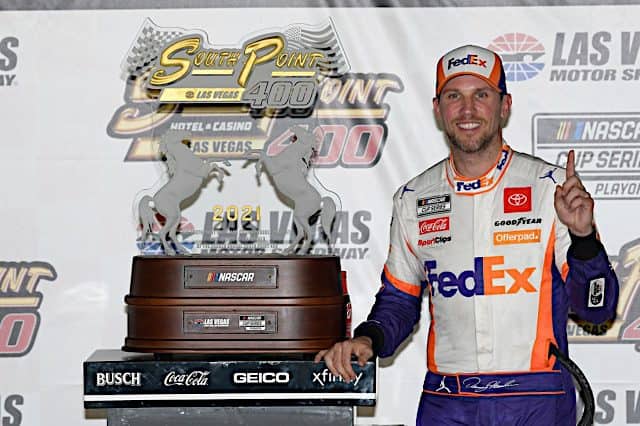 1. Las Vegas lackluster in the wake of Bristol’s chaos

In fairness, we can’t expect the level of intensity we saw last week at Bristol every single race.

But it was striking at just how calm the NASCAR Cup Series’ South Point 400 on Sunday (Sept. 26) night was, with just one caution for incident — and one involving a car further back in the field. The week prior had cut tires, tempers, crashes, fights … and Vegas provided a tame race in which little competition came eventual winner Denny Hamlin‘s way in the second stage and beyond.

The No. 11 took control after Kyle Larson won the opening stage and led more than half the race. Hamlin’s closest competition didn’t come until the waning laps, when the lapped car of Cody Ware held up the FedEx Toyota and allowed Chase Elliott to gain on the leader. Hamlin didn’t let up, crossing the line well ahead of Elliott, but it was probably a bit too close for comfort.

Larson and Hamlin’s differing strategies set the former back immensely when stage 3 began, and unlike other drivers the No. 5 couldn’t climb back into contention despite dominating at Las Vegas early in the year and seeming like the car to beat early on Sunday night. He only made it back up to 10th by the time the checkered flag flew.

As a whole, just 21 of the 267 laps were run under green-flag conditions, nearly 250 circuits in total. It’s likely partially the drivers wanting to start a round full of unpredictability off on a calm note, especially after Bristol, but Vegas has had a recent penchant for being uneventful. Predictable feels like the wrong word, but uneventful fits.

None of the past six races have had more than 40 caution laps, which means that few contenders have had their races go south via a crash, but the long green-flag runs, especially late on a Sunday night, give way to occasional snoozefests.

Speaking of Hamlin, he’s on fire.

Hamlin won the opening race of the Round of 12 after doing the same for the Round of 16, and since the playoffs began, he hasn’t finished worse than ninth. He doesn’t need to keep that streak through the next two races, already being locked into the next section of the playoffs, but that momentum sure would help as the title race at Phoenix draws nearer.

He’s won at Phoenix before, locking himself into the title race in 2019 at Homestead with a clutch win in the desert, but last year his dominance felt like a fleeting memory as the Championship 4 drivers went largely uncontested and Hamlin just kind of rode around behind Elliott and the two Team Penske contenders.

I’ve said before that this season reminds me a lot of 2011, with all the different and first-time winners and the sort of parity we’ve seen across the Cup field, but that year Tony Stewart won the opening race and won half of the final 10 events to claim the title. Hamlin might not win three more — though he easily could — but it feels like something special is brewing for that team come Phoenix.

For some of the drivers below the cutline, especially Christopher Bell (-25), it is.

Bell, along with Alex Bowman and William Byron, made up a small class of playoff drivers who suffered issues in Sin City.

Talladega presents a scenario in which anyone can win, of course, but Bell has never finished in the top 15 there in Cup competition and ended up mired in 24th in his Cup debut at the Charlotte ROVAL last year. Bell did win at the Daytona road course in February, however, and has an Xfinity win on a track with left turns as well.

However, the round itself, with the unpredictability of both a superspeedway and relatively new road course, is an animal all its own.

Things could easily go horribly wrong for a driver like Larson or Kyle Busch, both of whom are comfortably above the cutline. Larson barely made any laps at Talladega in the spring before issues ended his day, while Busch wrecked out last fall.

Across all three of NASCAR’s touring series, this feels like the “Round of Reckoning” for these drivers. Bowman or Byron could have mediocre performances at Las Vegas and the ROVAL and still win Talladega; they’ve earned their spots in the playoffs and wouldn’t be out of place in the Round of 8, but it’d be fascinating to see one of them leap in while a year-long contender is left on the outside looking in.

4. Where did Ryan Blaney come from?

It was a quiet fifth, but Ryan Blaney drove an incredibly consistent race and grabbed a top-five finish on Sunday. He now has eight top-10 efforts in his last 10 races, among the best in the field, and is one top-five and one top-10 finish from tying his career highs in those categories. He’s already won more races in a season than ever, still sits fifth in the standings and has become the standout at Team Penske.

Penske seemed to fade into the background after early-season wins from Joey Logano and Brad Keselowski, neither making much noise since, and Blaney didn’t after his Atlanta victory … at least, until Michigan last month, where he won, then won again the next week at Daytona.

Blaney even finished 10th at Richmond, his first top 10 there, and has now reeled off three straight such finishes and two straight top fives. The No. 12 team is 24 points to the good heading to a track he’s won at twice and a track he’s won at once (Talladega and the ROVAL, respectively), and nearly won a road-course race this year before he and Elliott tangled in the final corner in the Clash. All three times the Cup Series has visited the ROVAL, by the way, Blaney’s finished in the top 10.

Talladega isn’t necessarily a must-win situation for the No. 12, either; even crashing out would be fine if plenty of his fellow contenders do, and even running well would leave them in a solid spot heading to a good track for Blaney.

Keselowski and Logano might continue their solid runs, but Blaney is the most dangerous driver in the Penske stable right now.

The Cup Series headed west after chaos at Bristol, and it’s headed back east to (presumably) more chaos at Talladega.

With the last two fall races featuring all-out mayhem (Brendan Gaughan’s full flip and Chris Buescher‘s near-roll in 2019, Kurt Busch achieving liftoff in 2020), this season feels like it’s building to even more with all the different winners and unpredictability. Remember when Landon Cassill nearly won the fall race back in 2014?

It feels like this fall might evoke memories of 2019 or even 2017, with very few cars left running at the end, and possibly the chance for a photo finish as 2019 had. With October upon us by then and the weather cooling down, it wouldn’t surprise anyone if tempers are fairly hot once the dust, debris and carnage settles on Sunday.

Face it…the first 3 races in the ‘playoff’ are at tracks that almost guarantee lots of excitement. There is no way Vegas was going to even begin to offer that sort of interest. Even worse, as the focus narrows down to only the drivers in the ‘playoff’, it is going to be even less interesting to watch on tv, as there will be little coverage of any other drivers or teams.