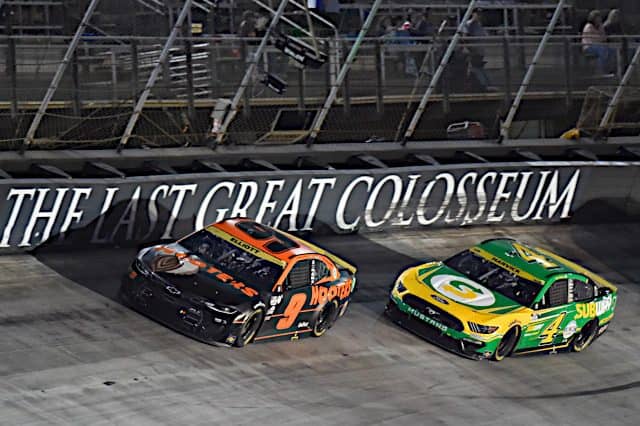 It’s been a while since the NASCAR Cup Series has had the makings of a big feud, hasn’t it?

Let alone the playoffs, it’s been a quiet past couple years as a whole for the Cup Series. In fairness, drivers couldn’t exactly get near one another in 2020 (Noah Gragson and Harrison Burton would beg to differ in Kentucky Speedway’s garage, but I digress).

It’s been two full years since a confrontation between drivers that’s cropped up felt like it could withstand several races or more. In 2019, the post-race scuffle between Denny Hamlin and Joey Logano never really went anywhere once the series left Virginia, while the fracas at the All-Star Race that season between Clint Bowyer and Ryan Newman was an isolated incident. The latter pair even exchanged some friendly barbs at Richmond Raceway’s media bullpen later that year.

The two years prior, though, things escalated a bit more: Logano and Martin Truex Jr.‘s infamous battle/war saga at Martinsville Speedway in 2018 and its predecessor, the Hamlin-Chase Elliott incident in the same event a year prior. Logano-Truex only sort of came to a head at Homestead-Miami Speedway when the pair raced for the lead and championship, but no contact ensued and Logano went on to claim the title.

Hamlin-Elliott concluded with the Elliott’s No. 24 walling the No. 11 at Phoenix.

As for 2021, Elliott and Kevin Harvick went at it at Bristol on Saturday (Sept. 18). Contact between the pair cut Elliott’s tire, forcing him to pit road and ending his chances at a win. Perturbed by said contact, the No. 9 of Elliott deliberately got in the way of the No. 4, the latter of whom was in the midst of racing Elliott’s teammate Kyle Larson for the win and allowed the No. 5 to scoot away.

This begat Harvick labeling the move as “chickenshit” post-race and closing his interview by declaring he was ready to “tear someone’s freaking head off.” It’s a look we really haven’t seen in Harvick’s eyes in quite some time: his frustration with Elliott’s move, combined with a frustrating winless season after nine such victories last year, likely has the Stewart-Haas Racing driver at a breaking point.

Saturday’s brouhaha (The Brouhaha at Bristol? Can we start calling it that?) comes between Harvick, a driver who’s winless in 2021 and fell short of the final round a year ago, and Elliott, who sits with multiple wins as the sport’s defending champion.

All of this is reaching a crescendo as the tour heads into the most wildly varied round of the playoffs: Las Vegas Motor Speedway to conclude September, Talladega Superspeedway to begin October and the Charlotte Motor Speedway ROVAL right as temperatures should start to take their downward turn in fall (then again, I live just north of there in Virginia, so I should know by now that they probably won’t).

Talladega, appropriately, begins spooky season and is a fittingly scary track for drivers to kick off the month.

As if they were trying to make up for the uneventful fall 2018 race at the superspeedway, the Cup Series has had two wild fall contests the last two years: in 2019, Brendan Gaughan landed a remarkable 360° blowover in turn 3 as cars crashed all around him, in a race dotted with huge crashes and Chris Buescher nearly rolling himself as the field came to the checkered (not to mention the photo finish between Newman and Ryan Blaney).

In 2020, Kurt Busch went flying 15 feet in the air as the field wrecked through the trioval.

At the Charlotte ROVAL, the last two years have featured what was essentially a spin-and-win for Elliott in 2019 and a soggy, slick race last year. The monthly forecast isn’t enough to look ahead to that race weekend yet, but rain is slated for a few days prior.

Las Vegas? Sure, that’ll probably be a calm race this Sunday (Sept. 26) night. Talladega and the ROVAL? It’s anyone’s guess what happens there.

This also sets up the opportunity for the Elliott-Harvick feud to escalate — we’ve seen final-corner crashes at the ROVAL before and Elliott was involved in a comparable incident at the Daytona International Speedway road course in the Clash this year.

And let’s not overlook playoff uncertainty off the track, either: Blaney is fourth in the playoff standings after riding a two-race win streak into the postseason and posting one of the best seasons of his career en route to two top-10 finishes in the first round, at Richmond (gasp!) and Bristol.

Outside of Blaney, Team Penske as a whole has been very quiet recently, and it feels like it’s been several years since Logano and Brad Keselowski scored their lone wins of 2021. Kyle Busch had first-round issues but moved on, while his Joe Gibbs Racing teammate Christopher Bell managed to leapfrog into the second round despite some very poor runs at Darlington and Bristol. Meanwhile, their stablemates in Truex and Hamlin won for the first times in forever — Truex for the first time since May and Hamlin for the first time all year.

Larson could easily go back-to-back with a win at Las Vegas and sweep the races there in 2021, which seems likely considering how unreal that No. 5 car has been this year. Alex Bowman and William Byron have had some fast cars all year, with Bowman pulling off a couple sneaky wins out of nowhere. Elliott had a quiet first round after a multi-win regular season.

Harvick is a lone wolf, the only driver not a part of Gibbs, Penske or Hendrick Motorsports. He’s also the only remaining playoff driver who is winless.

Don’t forget that things could easily boil over at Martinsville, especially if one driver or the other happens to be out of the playoffs in this upcoming round. By way of the other or not, one of the two venting frustration a la Matt Kenseth on Logano might be something that unfolds on our TV screens come Halloween.

Yeah, the Martinsville race is on Halloween. Add that fuel to the fire.

If nothing else, everything seemed to hit the fan at Bristol, regardless of division. The Camping World Truck Series had its own controversy in how Kyle Busch Motorsports teammates Chandler Smith and John Hunter Nemechek raced Sheldon Creed and other competitors, so that tour joins Cup in having an intriguing conflict heading into a brand-new round of playoff action.

The Xfinity Series, meanwhile, hasn’t even STARTED their playoff hunt and drama arose at the Last Great Colosseum. Contact between leaders AJ Allmendinger and Austin Cindric sent both cars sliding under the checkered flag, destroying both and a number of others as the pair slid back up into the pack. Allmendinger grabbed the win and regular season title by virtue of the move, so things have ramped up before the championship hunt gets underway in the soon-to-be-purple Xfinity Series.

Or, who knows? As my good friend and mentor Randy Hallman wrote for the Richmond Times-Dispatch, maybe the feuds will take a backseat to championship focus.

Either way, it’s gonna be a fascinating three weeks for the Cup Series to see how Feud: Kevin & Chase pans out … and, between all that drama, likely longer than that for NASCAR as a whole.

Nice column, Adam. The next three races, as you pointed out, should at least be interesting, and hopefully exciting. My prediction is that a major contender gets an early exit from the (cough) “playoffs”.

So are we considering the major contenders Larson, Busch, Hamlin and Elliott?
and maybe Truex…

I’d throw Blaney in as well, but I hope it’s not him.

Just wondering. Every year it seems one of the drivers you expect to at least make it to the round of 8 gets snake bit. I almost didn’t include Busch because he has been kind of cold lately (but how can you not?).

I doubt that the “feud” (and I use that term lightly) will continue because both drivers know that if it does, neither has a hope for the championship. As it is right now, no harm no foul, they both made it to the next round.

I think the tracks themselves will create some hurt feeling and surprises. Talladega and the Charlotte Roval in round 2 and Martinsville in round 3 are almost designed to create close racing and fender rubbing. Once you have that… chit happens.

Bill B
Reply to  ben

Hey Ben, Chase took his helmet off, while the real C/S hid behind his. The real fireworks will be this weekend if Delana shows up in her firesuit.