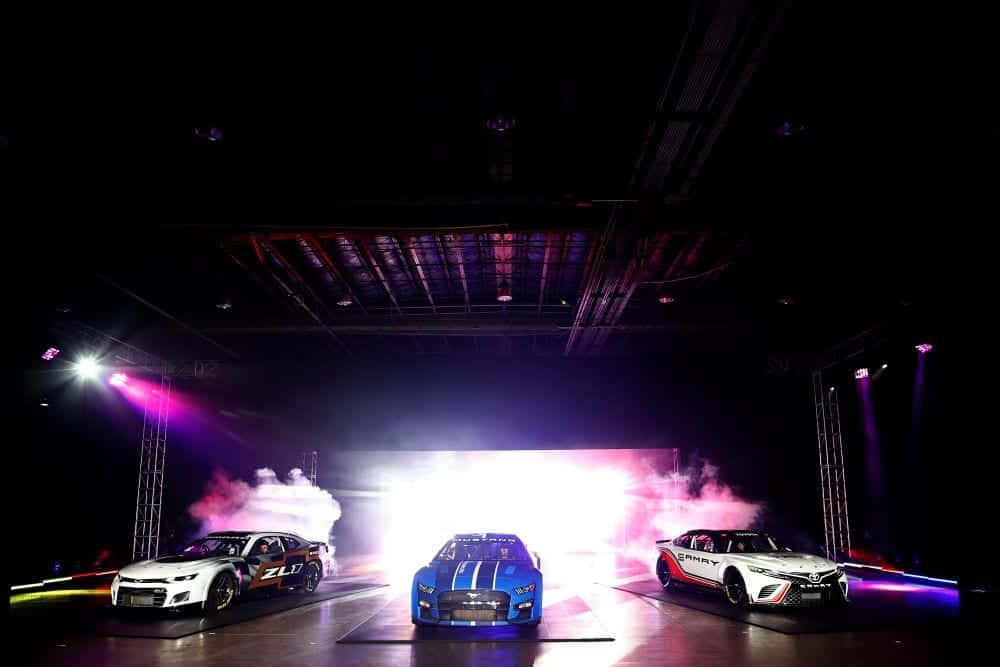 The 2021 NASCAR Cup Series season is over halfway complete, which means the Next Gen car is closer to its competitive debut than ever.

That doesn’t mean we are any closer to knowing what NASCAR will look like past 2021, though.

The top tier of stock-car racing is about to undergo a massive shift in 2022. Spec parts and pieces all coming from common vendors, new suspensions, new safety implementations — every single thing is new.

So trying to set expectations for what drivers or teams will hold or gain a competitive edge? Well, that’s just impossible.

Jeff Gordon met with media members on June 27 at Pocono Raceway days after his elevated role at Hendrick Motorsports was announced. Even as the soon-to-be No. 2 man at HMS, Gordon knows predicting what happens next year is more difficult now than ever.

“There’s so many unknowns, and it’s so hard to really even get deep into that conversation because we don’t even really have a chassis and a body and a car to go out there and test with,” Gordon said. “Yes, we’ve been doing these kind of group efforts with our OEM and with NASCAR, but it’s not been a full-fledged effort. We’re still in the development stage, and we’re working hard to be ready to go at Daytona in February, but a lot of work still left ahead of us.”

In the previous edition of this column, Corey LaJoie noted “every note that we’ve made for the past 25 years in the sport is obsolete” with the imminent departure from the current car.

Likewise, Erik Jones recently said “next year is such an unknown going in with a new car, and obviously, nobody really knows much about it other than the testing we have done.”

How, then, can we sit here and say some current driver will continue to whoop the competition’s butt for the next 10 years without knowing what he’s going to do in the next 10 months?

The truth is that we can’t.

Hendrick Motorsports has obviously found something with the current iteration of the Gen-6 car that has the team peaking once again after a long lull of mediocrity before Chase Elliott‘s 2020 championship. Kyle Larson is the man to beat week after week; Alex Bowman has netted a career-high season total of three wins; and William Byron broke through to win at Homestead-Miami Speedway, setting off a remarkable string of top-10 runs.

But who’s to say any of that carries through to 2022 or beyond? Those drivers’ talents have certainly shined as of late. It could mean a lot for next year … or it could mean absolutely nothing.

Gordon pointed to one commonality despite the incoming loss of in-house fabricators: people.

“You’re always going to put yourself in a position where you want to fall back on your people and the strengths that you currently have,” Gordon, a four-time Cup Series champion driver, said. “And I think those strings are still going to play out well for us next year. But until we get into it, we won’t know exactly how to take advantage of the areas of expertise that we have — the engineering, what area of engineering, aerodynamics, horsepower. All those things that are making us successful now will still be very important next year.”

Ownership will also look quite different in 2022. As Gordon vaults to next-in-line at Hendrick, 2012 Cup champion Brad Keselowski is all but confirmed to join Roush Fenway Racing as a driver and part-owner; Justin Marks’ Trackhouse Racing just purchased Chip Ganassi Racing; Matt Kaulig enters the fray as a full-time Cup owner.

According to Dirty Mo Media’s “Door Bumper Clear” podcast, things almost got even crazier. Spotter Brett Griffin, who currently spots on a part-time basis after many years as a full-time spotter for Elliott Sadler and Clint Bowyer, said Richard Childress Racing was rumored to be “for sale” while Kaulig was shopping for charters.

On top of the rich history and legacy that RCR holds on its own, NASCAR worked intimately with Childress’ organization to build and test the Next Gen car and put it on the racetrack. Suddenly, the team was for sale? That means nothing is off limits at this point.

Between the insanity of silly season and the introduction of the new car, there is no use in trying to set expectations for 2022. No one should pose any predictions until we see multiple true multi-car tests and see how these competitors wheel their cars.

Until then, put down the crystal ball. The glass is still too foggy.

It would seem that the transition to the “new car” would be the ideal time for any of the existing owners who want to step aside. Several of them are at the age that perhaps other things seem more attractive. Others likely have succession plans in place.
But transition is generally healthy and will likely be with the teams as well.

The term “money talks and bs walks” cones into play here. The teams that dominate now will dominate in the future. Simply because they have the necessary funds to do so. Timmy Hill and his cohorts will not be competing with Gibbs, Hendrick and Penske.
I’ll make this prediction. Mike Joy and Boyer will wear out the term “it’s a new car and the teams are trying to figure it out”. Or something to that effect.

NA$CAR is still making changes to the CoT and the teams are trying to figure things out.

Exactly who is trying to predict anything? An article addressing an issue that doesn’t exist.

NASCAR has been screwing with the cars for over 14 years and still hasn’t come up with anything to improve the product.

Instead, NASCAR blames the tracks. The same tracks that once provided some decent racing. Levigation, repaves, adding/removing concrete and asphalt, traction compounds.

Nothing has worked, but don’t blame the car.

That quote by Brett Griffin on “Door Bumper Clear” caught my attention.

Of all the mid-tier teams, RCR would appear to be the least likely to sell out. The organization has a clear succession plan with son-in-law Mike Dillion running the show. Austin Dillon is family and qualifies as a star driver in NASCAR. They have the factory-backed partnership with Hendrick to build nearly all of Chevy’s stock car engines. Plus, they have been the primary testing organization for the Next Gen car, so they should be pretty strong out the gate in 2022. Not to mention they provide tech support to more Chevy NASCAR teams than Hendrick does.

Now if Griffin were to mention Murstein wanting to cash out and sell RPM, that would make sense due to the team’s declining performance on the track and with sponsors. Also, JTG Daugherty seems a prime candidate for a sell-off since they already peeled off one of their charters before the 2021 season and have struggled with mediocre performance for almost its entire existence.

Oddly enough, the charter system seems to favor The Big 4 (JGR, HMS, SHR & Team Penske) and the “Bottom 3” (RWR, Spire & StarCom). But it doesn’t seem to be working to maintain the health of the mid-tier NASCAR Cup organizations.