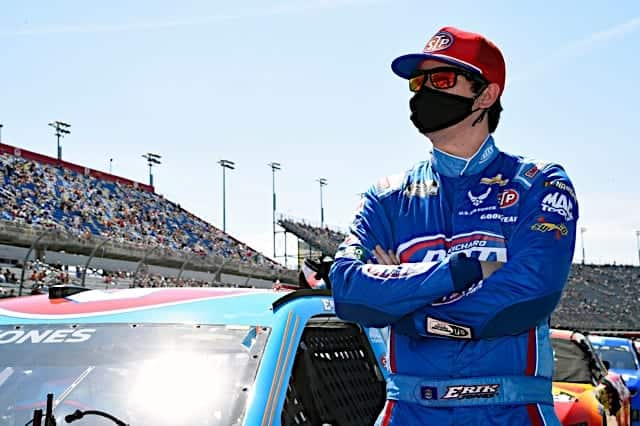 For the first time in 65 years, the NASCAR Cup Series took the green flag at Road America in Elkhart Lake, Wisconsin. The four-mile track hosted the fourth road course race of the season as the playoff stretch begins to heat up.

Additionally, the Jockey Made in America 250 hosted practice and qualifying for just the sixth time for the Cup Series this season. This allowed many teams to attempt to dial in their cars and actually dictate where they started the race, in contrast, to having the qualifying formula determine it.

AJ Allmendinger flexed his road racing muscles in qualifying, turning in a quick enough lap to start from the third position. Team Penske part-time rookie Austin Cindric followed him in fifth. Daniel Suarez and Michael McDowell also started in the top 20 in the field, in 11th and 18th, respectively. The challenges of a new track were notably present, however, even with practice and qualifying.

It has not been the year Erik Jones and Richard Petty Motorsports had been looking for entering the season. This season was a coupling of Jones, still a bright, young talent in the Cup Series with RPM  coming off a year in which they had been building a foundation. That foundation has crumbled at times this year, and not just of Jones’ own doing. While many Chevrolet teams have seen improvements in their overall speed and statistics, RPM has struggled to gain its footing. However, Road America produced a top-20 result that the team can build off of with the regular season winding down.

“Was a fight all day for the SCAG Chevrolet,” Jones said following the race. “We stuck with it and came home with a top 20. Think we learned some things for the next road course and hope for some more improvement there.”

Jones started from the 21st position in his No. 43 SCAG Power Equipment Chevrolet. The team opted to stay on track at the end of stage one, garnering Jones a 13th-place result. Crew chief Jerry Baxter opted for a different call in stage two, bringing Jones down pit road. Like many drivers, Jones was low on grip on the slick, curvy track.

The Byron, Mich. native got as high as 11th in the final stage. After a caution for Anthony Alfredo on lap 42, Jones pitted with the rest of the field, dropping outside the top 20. Road courses can be tough places to gain track position, and with a mid-pack car mired back in traffic late in the race, Jones faced a tall order. He was able to muscle his way past several drivers in the closing laps to pick up a 19th.

For Jones, it is his first top 20 since Nashville, the last of a four-race stretch inside the top 20. Additionally, it is the 11th top 20 for the 25-year-old this year. That is nearing the amount Bubba Wallace racked up in the iconic No. 43 a year ago, a season in which he scored 15 such results. Those stats aren’t all glittery and glamorous but the kind of results Jones and this team need to build for the future. Sitting 26th in points, Jones can only focus on earning solid results consistently and quite possibly pulling off an upset win at the regular-season finale at Daytona International Speedway.

Jones was the lone flare inside the top 20 for the underdogs. While many Americans set off fireworks across the country, the on-track fireworks blew up many results for NASCAR’s dark horses. Last week at Pocono Raceway, Dale Earnhardt Jr. stated on the broadcast that he considered top-25 finishes good runs for Spire Motorsports. But like we’ve seen before, Corey Lajoie has exceeded those expectations. Lajoie turned in a 21st-place run at Road America, just missing out on his sixth top 20 of 2021. As a team expected to be building for the Next Gen era, Lajoie has consistently “stacked pennies” for this team.

Rick Ware Racing has been coined many things in NASCAR, but they got an opportunity to make some noise this weekend. Many of their drivers have a rich road racing history, resulting in them getting to display their prowess. While it also was not an eye-popping finish, Josh Bilicki finished in 23rd at Road America. The result matches his career-best from Martinsville Speedway earlier in the year.

A couple of underdogs who had put themselves in a potential spot to sneak a playoff birth in lost footing today. Entering Road America, Wallace sat just 54 points off the cutline, despite only having one top 10. Wallace used mid-race strategy to get into the top 10 but ultimately faded as the day went along. That led to a 24th-place showing, his worst showing since Circuit of the Americas in May. Wallace now sits in 21st in points, 79 points behind Kurt Busch. Road course racing continues to be a box Wallace is looking to check off in the improvement category.

Likewise, Suarez entered the race 48 points off the cutline. In contrast to Wallace, road racing suits Suarez fairly well. Unfortunately, Trackhouse Racing may have found an equipment area it needs to improve in heading into next season. On lap 3 of the race, Suarez suffered a transmission failure, derailing his race early on. Suarez endured a similar issue at Circuit of the Americas. He now sits in 22nd in the standings, 88 points behind the final playoff spot. It was a disappointing result after the major announcement on June 30 when team owner Justin Marks announced Trackhouse had bought all of Chip Ganassi Racing’s NASCAR assets. Suarez will return to the team, with a second driver to be announced later.

Ty Dillon made his first start for Gaunt Brothers Racing since Circuit of the Americas. Dillon continues to search for more seat time in an effort to land a 2022 ride after a year in which he has endured lasting uncertainty. After a spin mid-race, Dillon recovered to finish in 26th.

Allmendinger was considered a dark horse threat to win the race based on his road course prowess. He also won both stages in the Xfinity race the day prior, adding to the optimism. Despite having his air hose fall off the helmet, Allmendinger recorded a second-place finish in stage one. Unfortunately, the challenges mounted. The Los Gatos, Calif. native suffered damage to his crush panels, which had to be repaired multiple times. The team’s strategy also put his No. 16 Hyperice Chevrolet in a bad spot, miring him back in traffic. After entering the top 20 with less than 10 laps to go, Allmendinger gambled on a stop for tires in hopes of a caution. That caution never came and the No. 16 Kaulig Racing driver crossed the line in 29th.

It was a tough day for Daytona 500 champion Michael McDowell too. McDowell entered the race as one of the long shot favorites to win. In 2016, McDowell earned first Xfinity win at Road America for Richard Childress Racing. McDowell’s No. 34 Love’s Travel Stops Ford endured significant damage to the front of his car late in the race, but it did not hinder him much. Crew chief Drew Blickensderfer tried his hand at with differing strategy several times, and it landed McDowell inside the top 10 at points of the race. Like Allmendinger, McDowell took a risk by pitting late. As mentioned, the yellow never came and it caused the Phoenix, Ariz. native to finish in 30th.

The playoff race in the NASCAR Xfinity Series seemed to be comfortable entering the Henry 180 at Road America. But once the haulers were loaded up, the fight is on after 17 races. Jeremy Clements entered with a comfortable gap over Brandon Brown for the final spot. But after the No. 51 suffered a blown power steering hose early in the race, Clements was forced to go to the garage. He rejoined the race three laps down, ultimately finishing in 28th. Meanwhile, Brown turned in another solid result, finishing in 11th. Now, Brown sits only 33 points pack of Clements. It will certainly be a compelling battle to watch, as both drivers also seek to hold of Stewart-Haas Racing’s Riley Herbst, who sits 43 points back.

Andy Lally also deserves a shout-out for the weekend. Lally made his fourth start of the year in the No. 5 for B.J. McLeod Motorsports. The road racing ace finished in 13th, his third top 20 and second-best result in those four starts.

What’s an Independence Day race without patriotic schemes? Many teams rolled out cars adorned in red, white and blue. Suarez’s team was one of them, with Good Sam on the hood for the first time in 2021. The patriotic colors absolutely brought on American vibes for the race. As mentioned earlier, however, the car only saw two full laps of action before the transmission failure.

The NASCAR Cup Series and NASCAR Xfinity Series heads to Atlanta Motor Speedway next. It is the first time since 2010. Wallace and Suarez led the underdogs when the series visited the intermediate track in March. In the Xfinity Series, Clements and Brown will look to get the advantage on the other in a tightening playoff race.

The NASCAR Camping World Truck Series adds another notch in the wood in what has been a historic year for NASCAR. The series will head to Knoxville Raceway in Iowa for the first time ever, presenting opportunities for underdogs with dirt roots.

Unfortunate turn of events for our @GoodSam racing machine this afternoon as a transmission failure takes us out of contention.

We will keep our heads up with our eyes on @amsupdates next weekend. ? pic.twitter.com/KWnIDvFi4L

Learned a lot for next time. Got a track we know up next. pic.twitter.com/Yfm2ss0KAP

Checkered flag is in the air at @roadamerica as @brandonbrown_68 and his @SimSeats Chevrolet Camaro cross the finish line in 11th-place. ? pic.twitter.com/opB4erOv4J