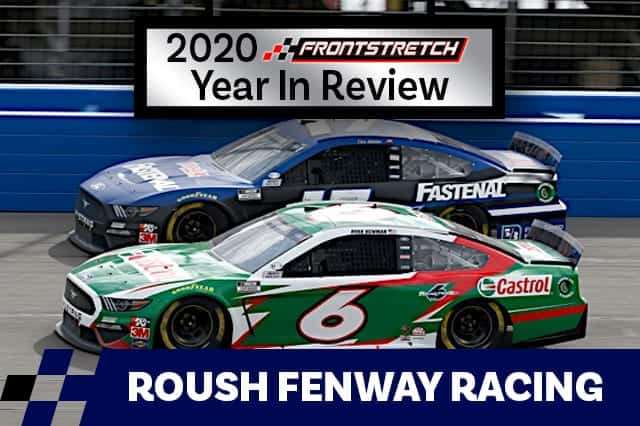 Heading into 2020, Roush Fenway Racing had reason to be optimistic in the NASCAR Cup Series.  The previous year, veteran Ryan Newman put an RFR Ford in the playoffs for only the second time in the last five seasons.  That was Newman’s first season with Roush, and it left fans wondering if Newman and the No. 6 team could make more progress in 2020.

Meanwhile, the No. 17 car got a new driver in Chris Buescher.  Buescher had competed for RFR in the Xfinity Series and won a championship in 2015.

Given Buescher’s past success and Newman’s positive impact in 2019, team owner Jack Roush appeared to have found a combination of drivers who were capable of turning his struggling organization around.

However, RFR’s 2020 season did not live up to its potential.  Neither Buescher nor Newman went to victory lane or qualified for the playoffs.  In addition, the team scored only two top fives (both by Buescher), which is the lowest number of top fives Roush’s Cup teams have ever earned in a single season since the team’s founding in 1988.  Throw in the fact that there were only 10 top 10s after Newman alone scored 14 last year and it is clear that RFR took a step backward in 2020.  Once among the mightiest teams in NASCAR, RFR still hasn’t pulled out of the downward spiral it’s been on for nearly a decade.

If RFR did anything right this past season, it was superspeedway racing.  Daytona International Speedway and Talladega Superspeedway have been Roush’s strengths for several years, and 2020 was no different.  Buescher’s best finish was a third-place effort in the Daytona 500, and he earned top 10s in the summer Talladega race and the Daytona night race in August as well.  If not for a last-lap penalty Buescher incurred during the controversial finish of the fall Talladega race, he would have swept the top 10 in superspeedway races.

Newman’s most competitive race was the Daytona 500, but his strong finish came with a hefty price.  Leading on the last lap with the checkered flag in sight, Newman got turned headfirst into the outside wall.  The force of the impact flipped the No. 6 into the air where it was hit again by another car.  This resulted in Newman flying across the finish line and skidding down the frontstretch on his roof.  A scary situation quickly unfolded after the race when it appeared that Newman was seriously hurt, or worse.

While the hours immediately following the Great American Race were certainly tense, Newman survived the crash.  He recovered from his injuries very quickly, walking out of a Daytona-area hospital just days later, his daughters by his side.

Unfortunately for Newman, the Daytona 500 and the fall Talladega race were his only top 10s of the season.  He was back in the driver’s seat by May, having missed only three races while recuperating.  But from his return until the end of the season, each race felt like a slog for the No. 6 team.  In 2019, Newman often started races with ill-handling cars and worked his way to good finishes by the end of the races.  That rarely happened in 2020, when Newman seemed to be stuck mid-pack just about every week.

Perhaps a lack of practice time hampered the ability of Newman and crew chief Scott Graves to adjust their cars.  Yet regardless of the underlying reason, difficulty in improving the cars took away Newman’s biggest key to success from the previous season.

Buescher seemed to experience a lot of the same difficulties.  While his eight top 10s in 2020 were a personal best for one season, his average finish was down a bit from 2019 (17.8 versus 19.6).  Moving to Roush from JTG-Daugherty Racing did not change Buescher’s typical pattern of finishing mid-pack most weeks, usually avoiding serious trouble but rarely running up front.  He led 33 laps this season (another personal best), but 19 of them were at Talladega alone.  And while a decent start to the season had Buescher in playoff contention, he fell below the cut line soon after NASCAR returned to action from the COVID-19 break.  It became increasingly clear that Buescher would not have a good shot at the postseason unless he won a race.  Considering how infrequently he ran up front and led laps, that was a longshot too.

In the case of RFR as a whole, there is no bigger indicator of how far the team has fallen than its performance on the intermediate tracks.  Roush’s teams used to dominate the high speed, unrestricted ovals that make up a large portion of the Cup schedule.  But 2020 was a reminder that those days are long over.  At Michigan International Speedway, an old RFR stomping ground, the Nos. 6 and 17 teams earned an average finish of 20.25 in the two races there.  Newman and Buescher averaged a 21.25 finish at Texas Motor Speedway, another Roush favorite.  Other traditional RFR strongholds like Las Vegas Motor Speedway (16.25), Auto Club Speedway (16.5) and Homestead-Miami Speedway (26.5) tell a similar tale: Roush is now a thoroughly mid-pack team.

This offseason will leave RFR with more questions than answers.  On one hand, it is possible that the severity of Newman’s crash at Daytona may have impacted his ability to drive a racecar.  Lingering effects from that accident would explain why Newman scored so few top 10s and posted his worst average finish across a season since 2008.  But in Newman’s defense, Ross Chastain ran no better for RFR in his three-race substitute role, posting finishes of 27th, 17th and 23rd.  Chances are that the No. 6 team’s issues run deeper than the driver alone.

The good news is that Newman and Buescher will return for 2021, and that Roush’s strength on the superspeedways will give the team a shot a scoring an upset win.  Yet 2020 was arguably the weakest season in RFR’s 33-year history, and there is little sign that the team is improving anywhere else.

If the organization is ever going to get back to regular contender status, it will need to make wholesale changes behind the scenes.  Otherwise, the team that once put all five of its drivers in the postseason in a single year will continue to slide toward irrelevance.

i don’t have any idea what is wrong at RFR but what ever it is, it’s been wrong for at least 10 years. I do know one thing, if the do not fix it soon sponsorship will become harder and harder to find particularly sponsorship with high dollars.