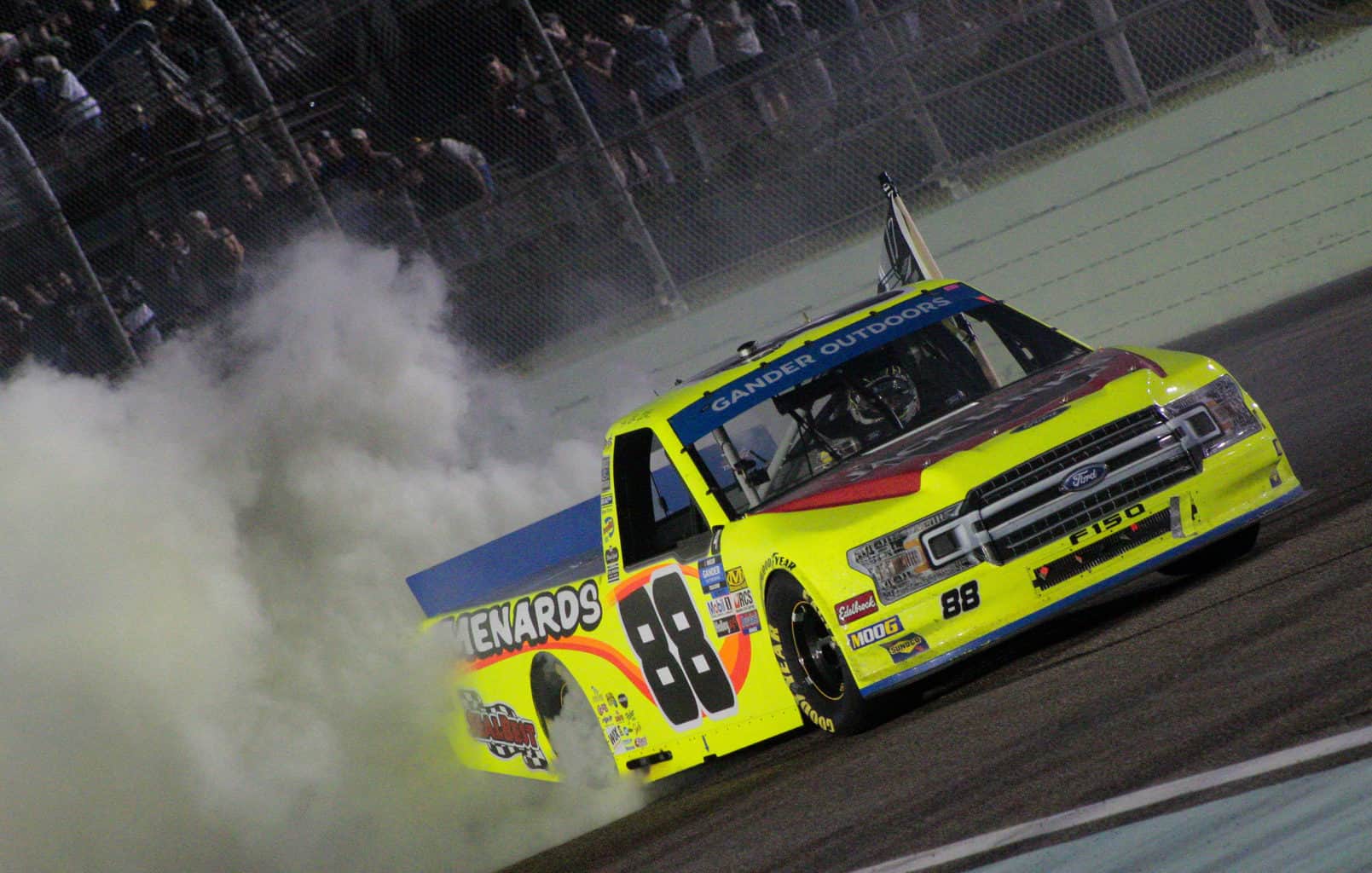 It’s a shame that he has to be the face of a 2019 title, however, that rings entirely hollow.

Securing the 2019 Truck championship on the back of a second-place finish at Homestead-Miami Speedway, Crafton became only the second driver in any of NASCAR’s national series to win a championship without winning a race, the first to do so in the current playoff era. In doing so, Crafton exposed the many flaws that still exist within NASCAR’s playoff format.

Before tackling that format, let’s make one point very clear. Regardless of his defiant attitude in post-race celebrations at Homestead, Crafton’s season was hardly worthy of a series title.

Crafton finished the season without a victory, failing to achieve something 10 other drivers accomplished in Truck competition in 2019. He tied for fifth in top-five finishes. Sixth in terms of average finish. 16th in laps led over the season. The ever-consistent Crafton didn’t even top the series in top-10 finishes this year. The 2019 ARCA Menards Series champion, Christian Eckes, led more laps in eight Truck starts than the 2019 Gander Outdoors Truck Series champ did in 23.

Short of the series championship, Crafton didn’t win much of anything in 2019.

It can easily be argued that this is what NASCAR gets for going to a winner-take-all approach to its finale race, and there’s merit to that argument. Reducing the sample size of a playoff format will yield more unlikely, or undeserving, winners. But like it or not, the one-race format does create guaranteed urgency in the final races of the season, and when one looks across the pond to see just how academic the Formula 1 championship has become during the same timespan, this is one decision NASCAR’s made that is understandable. Though it’s awfully ironic that the Chase era that started NASCAR’s obsession with playoffs came courtesy of Matt Kenseth winning the 2003 Cup title with one race win, and that since that time, the sport has had two winless champions crowned.

What Crafton’s exploits have shown is that the format created by NASCAR still remains inconsistent with the objective of making winning more important. During the Latford era, winning paid a paltry bonus. During the Chase era, bonus points for regular-season race wins ended up largely awash over the course of a 10-race stretch. Now, despite a playoff format that slants the regular season toward going for wins (Chris Buescher and Jeremy Clements say hello), when push comes to shove in the playoffs themselves, winning doesn’t matter.

It’s a very simple fix for NASCAR here: Change NOTHING about the playoff format all. Come the finale race of the season, any driver in the final four that hasn’t won a race must win the finale to win the championship. Granted, it’s not a perfect fix (who says the final four has to win a race?), but it would have resolved what transpired at Homestead last month without breaking a sweat.

I first wrote this take as part of Thinkin’ Out Loud last month after the Homestead race weekend, and watching our commentariat there were a number of readers who had no issues with Crafton winning a points title on the back of points finishes as opposed to wins. While I can understand waxing romantic about the pre-playoff era and its simplicity, there’s a schedule consideration to be made here — namely that the Truck Series schedule is in no way shape or form designed to crown a champion objectively.

NASCAR does not build a schedule actively considering that different racing disciplines be weighted a certain way. There is no consideration made that superspeedway racing should be 10% of the races run, or that dirt racing is a 5% of the schedule novelty.

Come 2021, if the schedule realignment truly does aim to establish race dates based on an active consideration of what type of racing should matter over the course of the season (i.e. balance out short tracks and intermediates), the points argument would hold water.

Fortunately for all involved, be it Crafton, ThorSport Racing or NASCAR, this will not end up being a scar on Truck Series history. Crafton is a very accomplished driver who has had no shortage of title-caliber seasons over his career. ThorSport is a stalwart organization that has won more than its share of races. Both of those facts save face for NASCAR, as Crafton and ThorSport can certainly hold their own with names like Ron Hornaday, Dale Earnhardt Inc. and Kevin Harvick Inc. History will likely prove kind to this fluky season.

Until that time comes, the story of 2019 remains that Crafton won nothing, and for that won everything. That’s not accurate, that’s not entertaining, that’s not right.

Bryan, you are beyond help. Maybe a mathematician can help. Crafton proved what Emperor Brian and a lot of others haven’t realized: you don’t need wins to get a POINTS title. What if the NFL decided that wins don’t count and rely on points for.Team A loses their two games 48-45 and 35-32. Team B wins their two games 24-21 and 35-27. Team A with no wins is ahead of B and more POINTS.

Having Kyle Busch win all 5 of his Truck starts also warped the standings. Those were 5 potential wins for Crafton and/or wins for other drivers that might kept Crafton out of the final 4.

All I know is that for the first 50 or so years in NASCAR there was never a win-less champion. Then they release this “New and Unimproved” playoff scheme and it has generated 2 (almost 3, if only Keselowski would have won Homestead in 2014 with Newman finishing second…) in its short existence.

The extreme example: You could lead every lap of every race (winning) and come to Homestead and lead the whole race, run out of gas, blow a tire, or be passed after the white flag and not win the Championship, maybe only finishing fourth in points.

Matty
Reply to  Tom B

TomB – think about how CLOSE that exact situation almost played out for Kurt Busch during the first Chase championship race in 2004 at Homestead.

Jeremy
Reply to  Tom B

This is the kind of luck I’d have if I were a racecar driver… lol :-(