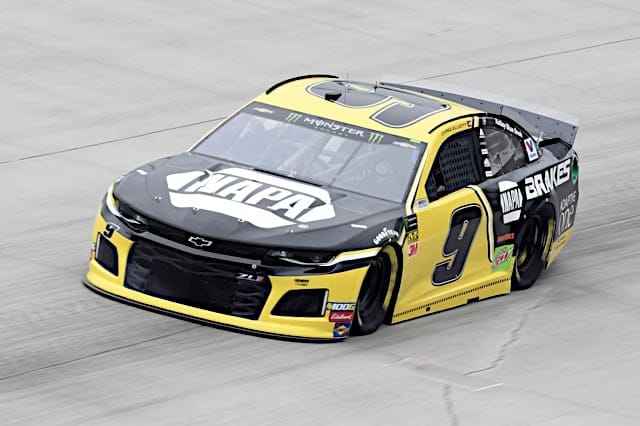 Chase Elliott scored his second pole of 2019 on Friday afternoon (May 3) with a new track record at 165.960 mph.  Elliott will be joined on the front row by his Hendrick Motorsports teammate William Byron.  Kyle Larson, Joey Logano and Alex Bowman rounded out the top five, making that four of the top five positions occupied by Chevrolet drivers.

Friday’s session was the first single-car qualifying session in the sport on a track one mile or less since 2013.  NASCAR made the change to the format earlier in the week after a series of controversial qualifying sessions, including at Auto Club Speedway when no one managed to get around to take the green flag before time expired in the final round. Although it was only a 40-minute session, this is what many drivers were advocates for, and many loved the old-school feel of it.

“Our NAPA Brakes Chevy was good right there,” said Elliott to FOX Sports 1 after his pole run. “This place can be either a lot of fun in qualifying or a handful, and today was one of those fun ones.”

Kevin Harvick, Aric Almirola, Denny Hamlin, Brad Keselowski, and Clint Bowyer will male up the back half of the top 10 for Sunday’s (May 5) race.  Kurt Busch, who was quickest in opening practice Friday morning, will start 19th.

35 of the 37 teams entered set times during the session. Both of the Premium Motorsports entries, driven by Ross Chastain and Reed Sorenson, failed to record times. They will start 36th and 37th, respectively.

Teams return to the track Saturday morning (May 4) for the second practice of the weekend at 9:05 a.m. ET. The session will air live on FOX Sports 1.

Looks like mr hendric finally got nascar to change the rules so his boys can drive the cars. Put a big spoiler on it and give the cars enough down forse so all you have to do is hold the gas peddle dowm and turn right. Nascar has to get their new golden child to winning races so they and fox booth x hendric employees can talk them up and not look like fools when all the hendric drivers go from first to mid pack during the race. Its my understanding tjat nascar let 3 hendric drivers test the new package before the talledaga race and it was amazing that one of them won. What a joke nothing but public relations. Next thing you know nascar is going to lay a rail around the bottom grove of each track and only hendric drivers can run on those rails. Easier than actually learning how to drive a loose car.

Bill B
Reply to  M vaughan

Obviously you didn’t watch it. They mentioned that this is the 4th time this season that two Hendrick cars have started on the front row. So, it seems like they’ve been OK for qualifying all along without a rule change from NASCAR. So maybe you should check on things like that before you say something that makes you look stupid.

James Friedeck
Reply to  Bill B

Finally,single car qualifying as it should be. Now to get rid of stage racing and the chase as well.

After watching the entire qualifying session, I can honestly say that I really did miss single car qualifying. I definitely prefer the one car one lap process.

You watched it?. I was watching my grass grow while having a cold one.

Bill B
Reply to  Bobby DK

What channel was that on?

You probably don’t watch qualifying regardless of the format. I usually watch it if it’s on, although rarely am paying 100% attention. You may not even be a fan because many non-fans say the same thing about watching any race (though some prefer “paint drying” to “grass growing”). So do you feel superior now?

Rearranging my sock drawer has more appeal than watching single car qualifying. And then we wonder why fewer people are interested.

No way to prove one way or the other but I’d bet you don’t watch qualifying much regardless of the format, you just saw a chance to say something you thought was clever and couldn’t resist. Or am I wrong and you’ve been watching qualifying every week for the last 4 years and this is the first time you haven’t on account of the change in format. BTW, if I am home when qualifying is on, I usually have it on the TV regardless of the format and watch it with one eye.

Or maybe you just have too many socks.

Maybe it was that after having to endure single car qualifying since 1965, granted it wasn’t until much later that it began to be shown live on television, I welcomed something different for a change.
As to the number of socks, maybe counting them is an option for next week. Thanks for the hint.