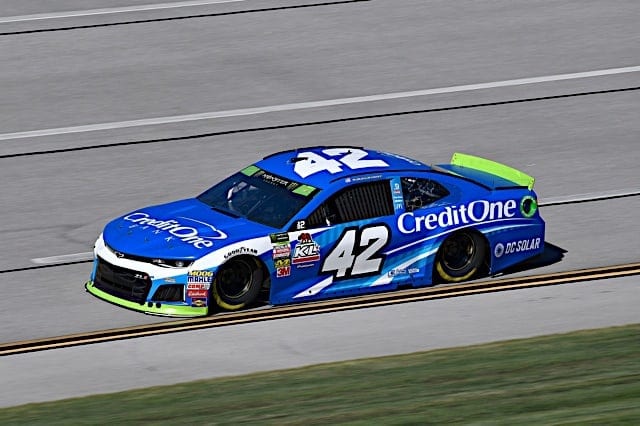 On Wednesday (Oct. 17), NASCAR released the weekly penalty report.  This week, the sanctioning body came down on Kyle Larson.  On Sunday, Larson blew a left rear tire on the backstretch and spun on lap 104.  Repairs were made to the CreditOne Chevrolet and Larson continued, eventually finishing 11th.

In post-race inspection, it was discovered that the team had violated the Damaged Vehicle Policy in getting Larson’s car repaired in regards to reattaching bodywork.  This has been determined to be an L1-level violation.  As a result, Larson has been docked 10 driver points and 10 owner points.  In addition, crew chief Chad Johnston was fined $25,000 and car chief David Bryant has been suspended for this weekend’s Hollywood Casino 400 at Kansas Speedway.  The point penalty does not cost Larson a position in the standings (he’s still 11th), but instead of being 26 points behind Martin Truex Jr. for the last spot in the next round, now he’s 36 points behind.

Aric Almirola‘s race winning Ford Fusion was found to have one loose lug nut after Sunday’s 1000Bulbs.com 500.  As a result, crew chief John Klausmeier has been fined $10,000.

In the Camping World Truck Series, three separate teams were busted for body modifications that allowed for the movement of air.  As a result, Young’s Motorsports’ No. 02 for Austin Hill, GMS Racing’s No. 21 for Johnny Sauter and Halmar Friesen Racing’s No. 52 for Stewart Friesen have all been assessed L1-level penalties.  Crew chiefs Chad Kendrick, Joe Shear Jr. and Graham “Trip” Bruce have each been fined $5,000, respectively.

I wish someone would give a detailed description of the Larson violation. I gather that they used some sort of “clips” to help hold the torn up panels to the remaining panels that were employed under the bear bond. A simple picture or sketch would go a long way in explaining the problem.

I can envision such a clip, much like the clips that are used on plywood roof decking between rafters, but that may or may not be what the infraction was.