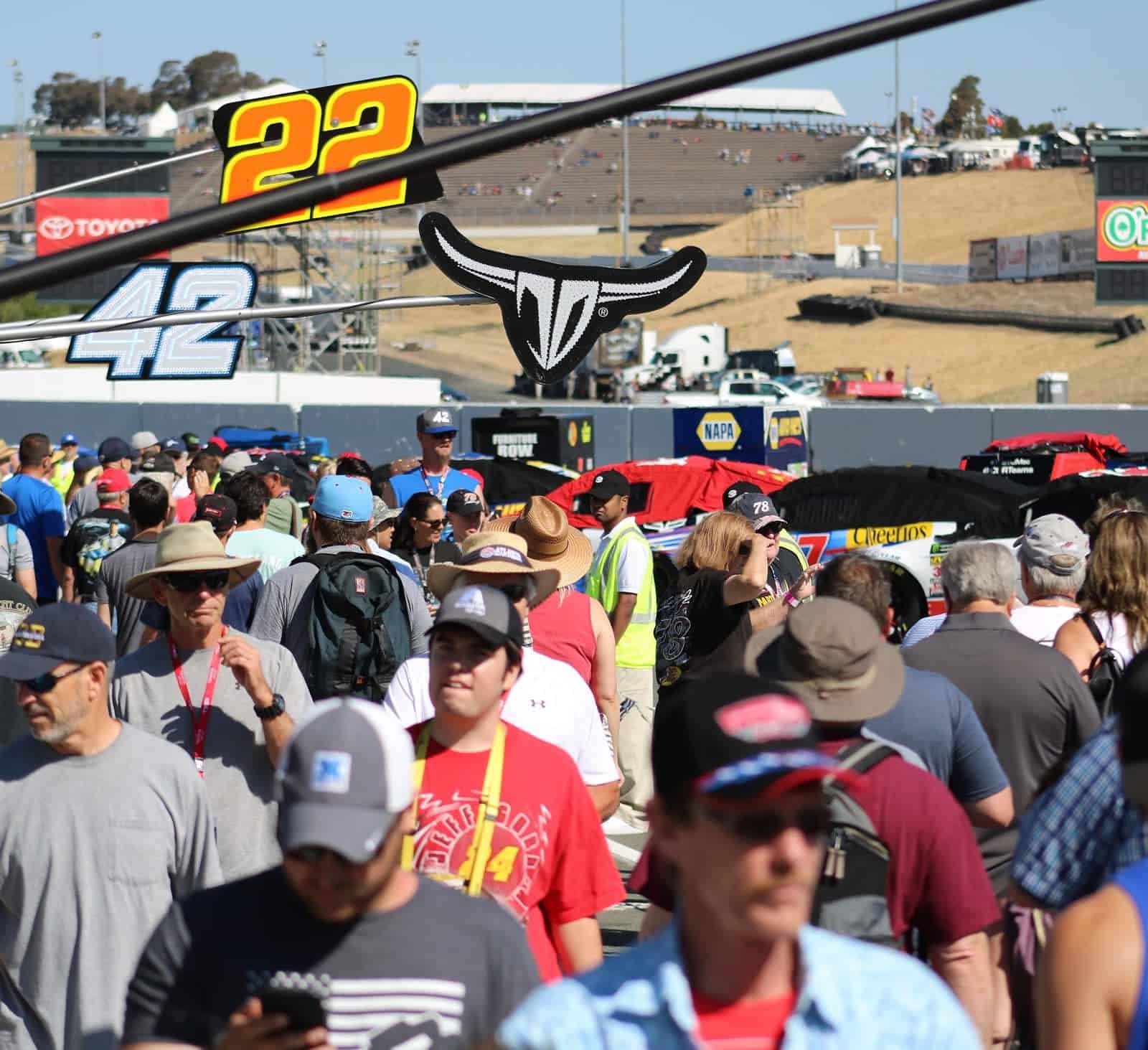 A fan attacked Kyle Busch after Saturday night’s (Aug. 18) race at Bristol Motor Speedway, which leads to this week’s question: are fans getting too much access to drivers at NASCAR races?

Excuse Me But Your Crazy Is Showing

Kyle Busch and Denny Hamlin have something in common.

Of course, they both drive for Joe Gibbs Racing. Both are incredibly accomplished with a host of victories across over a decade of racing in NASCAR. But they share a more dubious distinction. Both have been approached after a short track race by an overly aggressive fan.

Last fall, Hamlin punted then-leader Chase Elliott and sent the NAPA Chevrolet backwards into the Turn 3 wall at Martinsville Speedway. After the wreck, Elliott confronted Hamlin and initiated a rather heated discussion on the backstretch. Upon exiting his car, Hamlin was greeted by an avalanche of boos that cascaded down from the grandstands like rolling thunder.

Par for the course.

But then some bozo with a garage pass and more brawn than brains came after Hamlin on pit road. He was incensed, and one can only assume that it was related to the on-track action. However, what we should not have to assume is what might have happened if he were able to get close to Hamlin.

A similar event occurred this weekend at Bristol Motor Speedway to Busch. However, his heckler actually took the next step, getting physical with the star driver. Fortunately, it didn’t go beyond a little pushing, but it’s not hard to imagine how easily that situation could have gone awry as well.

This is not “your daddy’s NASCAR.” We live in a different world where acts of violence in public places are a sad norm. We aren’t safe anywhere anymore. As unsettling as it may be to think about, that includes racetracks. There are no metal detectors scanning fans as they enter the infield. You have no idea if the person in line behind you at the concession stand has a Sharpie or a knife in their pocket.

Fans might have a little too much access to competitors. There’s no reason why anyone involved in the sport should be subjected to misguided harassment from a loose cannon. It’s ludicrous for a fan to be so angry over how that fan interprets a particular event or series of events that they feel enabled enough to confront a driver after the race.

The pit and garage area is filled with people before, during and after races. Team members are often easy to identify, but it can be impossible to tell what business others have.

Do they work for a company that sponsors a car? Perhaps they won a contest of some kind that resulted in a hot pass. Maybe they just know someone that hooked them up.

I realize many people need to have garage access to perform their duties. But the number of people in and around the garage area has swelled to substantial numbers. Surely, they don’t all need to be there. NASCAR could do a bit more to limit who can get into restricted areas. Sponsor association is already loaded with perks like meet and greets, private suites and more. So that practice can probably be halted.

For those who do get access to the working areas of the track, there needs to be some type of vetting process. Additionally, no one should be able to enter a racetrack without passing through a metal detector. There are too many people gathered in close proximity to assume that all of them have pure intentions.

There is no way to completely prevent people from confronting a driver or some other personality. But there are ways to minimize the risk faced by those who spend their workday in the middle of a speedway. Amplified security is becoming commonplace in our daily lives. It has to become the norm at our racetracks.

Preferably before drivers being assaulted becomes the norm as well. -Frank Velat

NASCAR does not need to cut back on fan access.

Obviously, no one wants to see a driver attacked by a fan like we saw with Busch or Hamlin. But isn’t that kind of a double standard?

After Hamlin’s incident with Elliott, everyone in attendance wanted to see Elliott confront him, and deep down, wanted to see the two throw down. Had Truex done the same thing with Busch, then the crowd would have roared.

The 1979 Daytona 500 made the sport famous because of the legendary Allison brothers v. Cale Yarborough fight. I’m not saying that fans should enjoy watching drivers fight, but rather that it is a fact that they do. Driver fights sell tickets, and tracks use it to promote future races.

So how are two drivers fighting any different than a fan and a driver fighting?

Plus, let’s not forget that it was Busch who went up to Joey Logano last after the Las Vegas Motor Speedway race and threw a punch right at Logano’s face. What the fan at Bristol tried to do to Busch is not as bad as that. Besides, hasn’t NASCAR’s message for most of its existence been “Boys, have at it.”

NASCAR can’t afford to restrict fan access just because of a few bad apples. The sport has been bleeding fans for several years now. Telling the fans that still do buy tickets that they can’t get close and personal with their favorite drivers with a cold pass would drive away even more.

Stock car racing was founded on the principle that fans could come down and hang out with the drivers before the race and drink beer with them after. That’s still the case at short tracks and dirt tracks across the country, and many produce good crowds.

Fan engagement is one thing that NASCAR has done better than all other sports. If I go to an NFL game, then I can’t go walk on the field before the game, and I especially can’t get within 10 feet of Aaron Rodgers.

But if you buy a hot pass for a NASCAR race, then you can get autographs and/or selfies with drivers at various points throughout the weekend, you can walk right up to a team’s garage stall and watch them work, you can be behind a pit stall during a race and you can stand within a few feet of the drivers as the national anthem plays.

That kind of access won’t be found anywhere else, and it gets people that attend a race to fall in love with the sport. Getting rid of that would ruin one of the few advantages that NASCAR has.

What should be done instead is security at the gates should be get tighter. When I went through security this past weekend at Bristol, gate security checked my bag, but they didn’t check my pockets or have me go through a metal detector. This may have just been because I had media credentials, but still, those could probably be forged.

NASCAR should never ban fans from bringing in coolers, but measures should be taken to ensure that nobody brings a weapon into the track. If a fan confronts a driver with his/her fists, then let them at it, but fans should not be allowed to bring any sort of weapon with them to that fight. – Michael Massie

I think NASCAR has currently and for some time has had too much access for fans….insanely so.

years ago i was at spring race at ams. had pit access. you have to be aware on pit road. rusty hit a fan strolling by the opening to the garage area. people have to remember it’s the drivers and crews work area. i always respected that. i was appreciative for the access.

but you know, it think the work respect needs to be included in this article. ky busch’s driver’s intro sat night said it all. without the fans there’s be little left of na$car. both fan and busch were wrong. as they say don’t poke a snake with a stick without consequences.

Exactly, what always bothered me about this access, which is a privilege whether you pay for it or not. YOU are at people’s work, and many just don’t respect that!

To contend, as Michael Massie did, that it’s OK for a fan to physically attack a driver, is absurd. That fan should have been arrested for assault. With a drunk and disorderly charge thrown in. I doubt Busch would have filed charges or agreed to serve as a witness, but a night in the cooler would have been the first step toward stopping this idiocy. Buying a ticket does not give the ticket-holder the right to attack the competitors. That should be obvious, even to the brain-dead among NASCAR fans and writers.

I guess Massie is too young to remember a fan ending Monica Seles’ career by stabbing her. NASCAR does not need any more black eyes from those who run the sport or those who pretend to be fans of it. All this incident and the Hamlin incident do is reinforce the stereotype of NASCAR fans as uneducated drunken boors, which may be true, but does not need to be advertised.

I don’t think the actions of one idiot should penalize the rest of the fans. If you want things to improve attendance-wise then driver access is a big deal to some (not me personally, not into hero/idol worship). The fan should be arrested for sure, that’s the only way to make sure it doesn’t happen again.