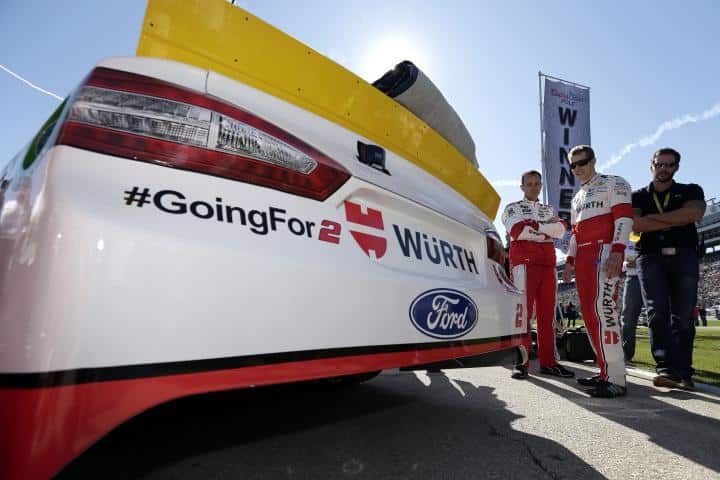 As the closing laps ticked off at Texas Motor Speedway and Jimmie Johnson edged into the lead, you could hear the cheers from fans not wanting to see Brad Keselowski move easily into the final round of #TheChase at Homestead-Miami Speedway.

It was a heartbreaker, for sure, considering Keselowski led 312 of the 334 laps in the AAA Texas 500 and looked to have victory securely in his grasp. But this is NASCAR, and anything can happen, including getting run down and passed cleanly by another driver with six laps to go in the race. The other scenario would be reminiscent of Kansas Speedway but I digress.

However, it wasn’t just fans cheering when Johnson took the lead there were several teams on pit road happy to see Team Penske denied. They weren’t necessarily cheering “for” Johnson, it was more that they were cheering against Keselowski.

Had Keselowski won, it would have made things even tougher for Kyle Busch, Carl Edwards, Martin Truex Jr. and Kurt Busch, so those crews were happy to see the race play out the way it did. It also would have given Joey Logano a slim chance at redemption if he could win the race next week at Phoenix International Raceway.

Since Johnson was knocked out of #TheChase in Round 1, his win made it almost impossible for two Penske cars to fight for the championship at Homestead. Logano is in a must-win situation being 63 points down to Truex Jr. Sure, Keselowski and Logano could pair-up with a 1-2 finish but it would still take a bad run by everyone ahead of them for both drivers to advance. In fact, the myriad of mathematical equations is so complex that it would likely take a college professor to figure it out.

So, for all practical purposes, there won’t be two Fords battling for the championship during Ford Championship Weekend. That obviously makes, at least, one driver smile.

Matt Kenseth, who was serving out his two-race suspension, chimed in on Johnson’s win via Twitter.

Good work @JimmieJohnson! Textbook pass for the win at the end of the race when someone is trying to take your lane. #quintessential

Whether you like #TheChase, or not, that is entertaining… and, at the very least, shows Kenseth is still unrepentant.

Who the hell called in sick forcing Huston to write NASCAR? Sorry Huston, I’ve found that a steaming hot shower helps with the smell. Now I need one.

Bill B
Reply to  J. Smith

Might want to re-check who spewed this article out… it’s our good friend, NASCAR spokesman, Jerry Jordan.

J. Smith
Reply to  Bill B

It was late last night and I contend that Huston’s name was originally on this article. Probably thinking I’m right but wrong as usual. Sorry Huston.

Way to Jerry! Feed that hate! Glad you think it will look good on Ford to have no Fords in the final. Personally, I hope any Saint Gibbs driver who makes it is the first car out.

Seems to me that in years past you could replace the Penske names with Dale Earnhardt. Didn’t stop him from being one of the best, did it? “If they aren’t cheering they better be booing”…quote Dale Sr.

Yep. He moved people out of the way all the time and was a God for doing it. Short memories they have. But then again, these are the same fans that think Jr got screwed out of the Final 8 by Logano, so we aren’t talking about geniuses.

Bingo..and the “elders” more mature ones (sarcasm), who float angel wings and are the biggest whiners of “being raced” are playing to the lowest IQ, and it is working. Penske, races…like the old days..and the whiners can’t handle. Joey became a double target when Nacsar gave Junior every op at Dega, and Junior just could not get it done. How dare Joey race Dale even for a couple of yards or feet at the Earnhardt anointed church…Dega….SMH. And dare to race Matt the way Matt raced him. I call BS on fans of racing..more like a popularity contest, that the mean girls club runs. Sheep.

Matt K. should stop with the wise ass comments and try to win back some respect from true Nascar fans for his action at Martinsville. I have been following the sport for fifty years and I have seen many racing “incidents” over this time. and have seen many forms of payback.i have never though seen payback where a driver with a car that was no longer competitive lays in the weeds to take out the leader. in such a critical raceIf he spun him while they were racing hard for position I would understand but this action was beneath his so called reputation as Mr. Clean.It took 15 years but he has finally shown his true colors. Joey had payback coming but not at the cost of a black eye to the sport which struggles for credibility in the sports world

Cry me a river Ricky.

Dave wants all others to mute the obvious…that doesn’t make it any less true Davey.

Matt has been an asset to Nascar for many years. He has paid his dues. Little Joey is just a lucky sperm.

Yes lets all bow down to Matt. For all the “dues he’s paid” he sure didn’t learn how to block correctly. He’s pretty good at trying to kill someone though.

Yeah, Kill (just ask the families of Charlie Jarzombek and Richie Evans what can happen at Martinsville). I wonder what Matt’s reaction would be if someone stuffed his son Ross into the 3rd turn pit entrance wall at Rockford, IL or Anderson, IN because of some real or perceived slight on the track. Stop acting like these drivers are invincible.

how about enough with the ignorant and lying shitz by you and your kind?????????? Didn’t know we had to bow to ask permission…seems like the same theme on the racetrack….bullies.

Nice to see Jimmie rip that win away from Brad at the last second. Kind of reminds me of something that happened in that race last year?

Did you hear the cheers when Joey was going to the garage….Karma?

So???? Mean more stupid people in the stands…..

Looks like the media narrative is securely planted in the Kenseth camp. Love how they act like the Penske drivers are the lowest forms of life, even though Kenseth has done the exact same thing many times before. Unbeleivable double standard and the media is just adding fuel to the fire. Well done Jerry. You got the low information fans in an uproar. Nice work. Maybe Logano should have just punted him like everyone is wrongfully accusing him of. At least then, it would leave no doubt what happened since people can’t seem to tell the difference between a racing incident and “wrecking” someone.

Tis true Steve, and a pathetic spectacle at that, no matter who you root for. Have seen it many times before.

Or maybe his teammates (Kyle, Denny, Carl) have just robbed off their type of racing on Matt?

Really, it’s a column expressing what happened at the race. There was, and is, no narrative. By the way if I was so pro JGR why did I have the exclusive pics on the splitter alterations.
Get a life, I write what stories are out there.

I’ll tell you what I want, what I really really want…Mean Jerry back. I prefer Mean Jerry over the Nice Jerry that wrote this informative and unbiased article. #wheresmydramajerry