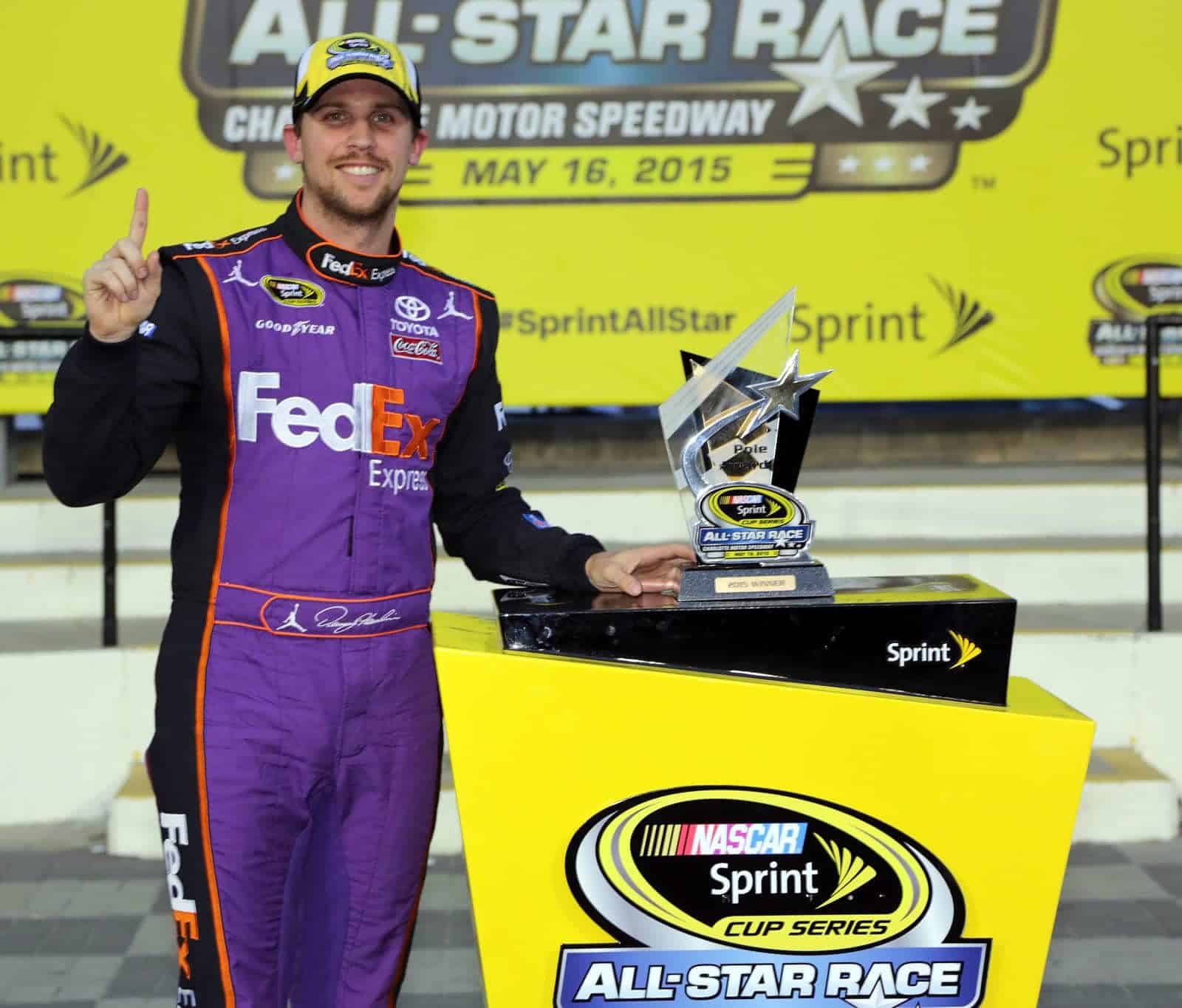 ONE: Clean Air Can Be Too Good

The Sprint All-Star Race has become a hard sell in the modern-day. Once a staple of the NASCAR Sprint Cup Series, the race has become less valuable to fans over the years. The gimmick has become bogged down with constant rule changes. However, the racing has typically been good enough to keep fans around.

Sadly, that wasn’t the case this year. The race for $1 million became a follow-the-leader parade down the stretch, with only two green-flag passes for the lead. Charlotte Motor Speedway became the latest track to suffer from NASCAR’s aero issues, with the leader being too strong in clean air.

The racing in the pack has still been fun the watch, but many fans watch for a winner. Sadly, if the Coca-Cola 600 plays out like the Sprint All-Star Race, it may take fuel strategy or a late-race caution for fans to see an exciting ending.

The Sprint Showdown has always been a fun event. Watching drivers that don’t always get a chance to shine compete for a chance to race in the Sprint All-Star Race is exhilarating. The wins sometimes even springboard into bigger triumphs down the road; Michael Waltrip won the event twice in 1991 and 1992 before winning the money race in 1996, and Dale Earnhardt Jr. won the event in 2012 just weeks before ending a four-year winless streak in Michigan.

However, only twice has a transfer from the last-chance race found triumph in the all-star event the the same year (Waltrip in 1996 and Ryan Newman in 2002). Fan vote winners have not fared much better; only Kasey Kahne has ever gone on to win the big paycheck after getting the nod from fans.

The small number of double winners makes sense. The All-Star Race is one of the shortest on the schedule, and features the best drivers on the circuit at their best. The Sprint Showdown winner can win the All-Star Race, it just isn’t going to happen very often.

Denny Hamlin’s second trip to victory lane in 2015 has made the Virginia native $1 million richer, but it’s also become the latest in a topsy-turvy year.

Through 11 points races, Hamlin has put together a win, three top fives and four top 10s. However, he’s also accumulated six finishes outside the top 20, including an ugly 41st-place showing in Kansas. The inconsistency has him sitting 15th in points, with an average finish of 18.9 – the second worst average of his 11-year career.

The inconsistency doesn’t matter too heavily for now. Hamlin’s Martinsville win all but assures him a place in the Chase for the Sprint Cup. However, the team needs to figure out a way to bring home consistent results if they want to equal or better Hamlin’s third-place showing in the 2014 Chase.

FOUR: Passing of the Guard

Chase Elliott finally appeared to return to form this weekend, soaring as high as fifth in the Sprint Showdown, and coming within one late caution of winning the NASCAR Xfinity Series race at Iowa Speedway. Now the 19-year-old is gearing up to compete in NASCAR’s longest race, the Coca-Cola 600.

It’s interesting to see Jeff Gordon’s eventual replacement compete in the very race that Gordon took his first trip to victory lane in 21 years ago. Should Elliott find the same speed that saw him contend for a position in the Sprint All-Star Race last weekend, the Dawsonville, Ga. native’s run could serve as a substantial passing of the guard from veteran Gordon.

FIVE: Rest and A Comfortable Seat

As our own Danny Peters touched upon in last week’s Five Points to Ponder, this Sunday is considered the greatest day in motor sports. Diehard racing fans will plop down in their nicest chair and watch racing from sunup to well after sundown, potentially sneaking a nap in somewhere.

What’s true for fans will also be true for drivers. The Coca-Cola 600 is the longest race on NASCAR’s circuit. The race is a grind, starting in the late afternoon and running well into the night.

While fans can succumb to drowsiness and sleep before the checkered flag – just ask my parents – drivers cannot. There will be multiple strategies at play, with potential winners throughout the field, and all it takes is one small error to ruin the entire night. A good night’s sleep and physical endurance in Charlotte could be the difference between a Chase berth and a junked car.

Whether any of the races end up being worth watching is always a crapshoot.

What’s most important about these three races is that they provide an excellent excuse to sit in front of the TV for a day and do nothing else. The only thing that could make it better is if it rains where I live (nowhere near any of the races) because then it’s even more justifiable to blow a day off watching TV. If it doesn’t rain then I probably will still sneak some yard work in between Monaco and Indy.

I thought the all star event was a dud. I don’t really think that the 600 will be much better – based on recent past experience.

I’ll probably watch some of the Indy 500 but if the weather is nice, I’ll be outside not sitting inside watching the races, although considering how long the 600 is, I may be able to catch the end.

I just can’t get on board the “Chase Elliott” train. I’m sure he’s a nice kid, just as Kyle Larson and Erik Jones are, but NASCAR has pretty much worn out my desire to bother with it and choosing a “new” driver when Gordon retires holds no interest for me.

I’m with ya Gina. At first I was excited when rumors were flying about Elliott and then confirmed that he would pilot the 24. Now it’s kind of like “eh” with a shrug. My plans are to check out the view at the Daytona 500 in 2016 from my new seat location and all the changes being made there and then decide if it’s going to be worth the $200 per seat (4) to renew after that. Nope just can’t seem to get too excited anymore after 50 years of being a fan and seeing Petty and now Gordon ride off into the sunset.

Wow, I hope you have a great view for that price for the seats! Enjoy the race. Most of the time it is more fun being there than watching on TV, but that isn’t always the case – it certainly hasn’t been for us when we’ve gone to Dover or Charlotte lately. We decided that spending the $ for tickets & travel, plus vacation time, just didn’t add up to something we wanted to continue to do.

Over the years, before the ugly car and the Chase IMO screwed everything up, I really enjoyed going to races. We were fortunate to be able to go to all the tracks where we wanted to see a race before all the changes were made. The Bristol night race was a hghlight! Very glad we got to go to that one before the new and not improved edition of NASCAR.

I get more excited for the 500 than the 600 anymore and I’m not even nuts for open-wheel racing. Maybe it’s because I don’t watch much IndyCar and everything is relatively fresh, “storylines” and gimmicks and all.

Tim, I feel that way, too. As you say, maybe because it is different than what NASCAR has become, but over the past couple of years, I’ve watched the 500 and enjoyed it.

Whoosh aero Zzzzzzzzzz. I plan to skip the 600 mile Charlotte parade. Any one have a good reason not to?

If it rains,a good chance, I’ll watch the 600. If clear, there a multiple options that are more interesting.
Since when is follow the leader(clear air)considered racing? Money(sponsors) and technology have removed racing from the event. EVENT, not race.

Monaco will be the must watch for me. Want to see if anyone can derail Mercedes around the city streets. After that theres plenty of interesting things to do.