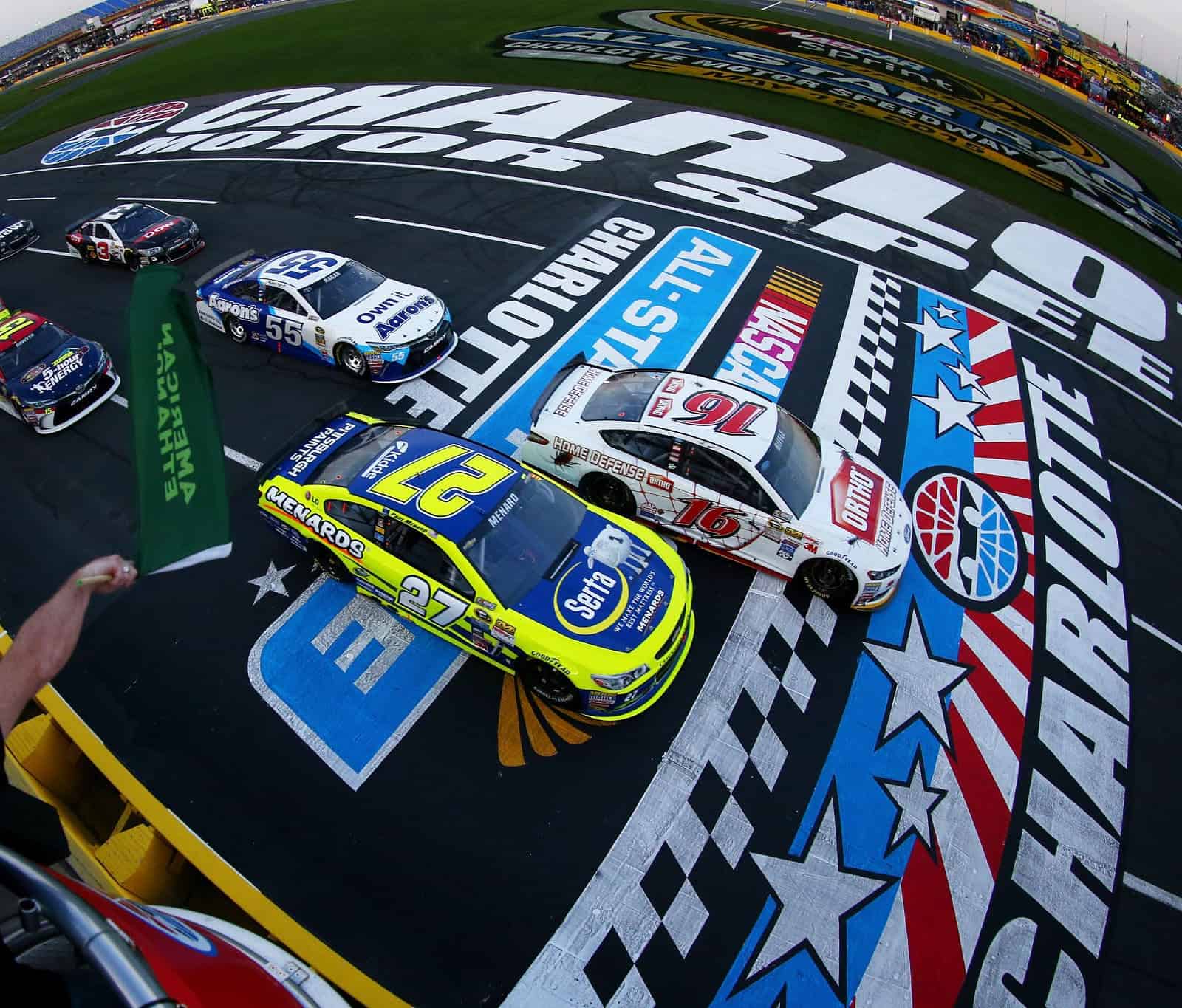 Editor’s Note: Are you receiving the FREE Frontstretch newsletter? If you’re not, you’re missing out on great, exclusive content like this one from S.D. Grady, Mark Howell, John Potts and more! Click here to sign up and see what you’re missing!

Ooh! Shiny. As easily distracted humans, it doesn’t take a whole lot to turn our attention from one thing to another. In a loud droning situation, like a NASCAR race, where cars turn left, then turn left…and left, it can be something of a struggle not to get lost in the sameness of the action. As spectators sitting on a bench or in an easy chair, we all have our little games lined up to keep the focus on our favorite driver.

There’s the checking of smartphones for the latest comment from the Twitterverse. We have a set number of drinks ready for consumption. If I wait until lap 50, it’ll be time to crack open the next one. While we count down the circuits to the next pit stop, we are also reviewing the list of chores we have to do and when they might get done. Load the washer at the next caution, get the dishes going if there’s a big wreck, somewhere about halfway let the dog out. Or, if I leave my seat in row 62, I can get down to the restrooms and back to my seat before there’s one to go…maybe.

So we wait. Wait for the yellow lights. In a reverse response to the green flag as it drops for the drivers, cautions are the opening of the gates for the fans. We race to the restroom, dig around for the dropped remote, flip the channels on the scanner. Sometimes, we simply stand up and stretch. Our lives are dictated in response to the flashing colors, not so dissimilar to a reaction we’d have after a timed bell.

But there’s lots of flashing colors during a race, especially when the All-Star Race appears on the calendar. For some strange reason, when the stars of the NASCAR firmament run late at night for dinky little 25-lap segments it has been deemed that the faithful fans must require more stimulation than normal in order to stay awake.

We have fireworks, mosh pits, and introductions that run more like the Super Bowl. Then, there’s the track itself. Charlotte Motor Speedway is admittedly one of the prettier ones when it comes to decorating their fences; but when the caution lights are on, it’s more like a giant string of Christmas lights flickering all around the perimeter. With the night descended upon us, we’re left with the twinkling reflects off the hoods of speeding cars. That’s not to mention the sparks shooting out the bottom of the vehicles when they bottom out at the exit of the turns. At moments, it reminds me of the sparklers we love to play with celebrating the 4th of July.

Next, there are the little lights, the pit road open spaceship that likes to hide somewhere around turn 4. It’s the hot track flashers you can find attached to fences throughout the infield, beacon bars sitting on all the emergency equipment, traffic lights for the tunnels, signage that illuminates half the city telling everyone that the track is open tonight. If we think about it long enough, you can hear the rhymes of Whoville begin to invade your mind. The lights, lights, lights! Like strobes in the middles of a desert, the track becomes the beacon attracting as many moths to the excitement as possible.

And it does. With a bowl of popcorn and some small amount of giddiness, we settle in to watch the race that doesn’t matter much in the grand scheme of the endless season. It’s a Saturday night in May; the promise of a summer of racing lays before us and right now, we get to revel in all the insanity. The lights have done their job. We’d be sitting cross-legged two feet in front of the tube if we were nine years old again.

The magic can’t last forever. No, that’s not going to happen. But just when it is all over, the checkers signaling the lowering of the engine hum, there’s one last light show for us to watch. The burnout.

Denny Hamlin did it nicely. His No. 11 FedEx machine blew up the night as he maintained a cloud of smoke all the way down the frontstretch, the spastic light show from his dashboard cutting through the revelry. Inside his cockpit, a miniature disco ball flickered off every reflective surface. The crowd responded in kind, igniting their side of the fence with camera flashes.

At home, the washing machine beeps its completion, the yellow glow from the clean dish light warms the kitchen. Fox Sports 1 kicks over to their news programming and the magic dissipates. The last sip of beer is emptied. The party is over.

Come next Sunday, we’ll be rewarded with 600 miles of racing. But it won’t be the same. Somehow, the late afternoon glow that seeps into night isn’t there anymore. That special electricity belongs only to the All-Star Race…and that’s how it should be.

1994 Coca-Cola 600: Was he really that young? Was I? LOL! At just 22 years of age, in his second full season of competition, Jeff Gordon won his first career race in the 1994 Coca-Cola 600, stealing it from the pole.  Called by legendary Ken Squier in the booth, buoyed by the Rainbow Warriors manning the pits, and accompanied by a blushing Brooke, it was the beginning of an era.  What a ride it has been!

Fun watching the video. Nice to see the cars bounce as they go around the track. BTW, I read your bio incorrectly. I thought it was your CAR named Betty. LOL. As good a name as any other I suppose for a car. ;)

I posted an article on May 12 I found on the internet which said the All-Star race at Charlotte has been a dud for the past 10 years. After what I watched last Saturday night, make that 11 years. That was a poor excuse for a race. I totally wasted 3 1/2 hours of my life on that. I would hate to have been one of the race fans who spent their hard earned money to go see that in person. In addition, all of the pre-race hype just makes the outcome that much worse. And I am sick to death of Michael Waltrip and Darrell Waltrip with their silly, goofy, idiotic comments, too. They both think they are so humorous and witty. I have news for them. You guys suck!!
I have heard this idea thrown around for years and I believe it is now time for it to take place. Many people have said they would like to see the All-Star race moved to a different race track each year. I am all for that! The race has become way too predictable and BORING! The other option I would suggest would be to eliminate the race completely. It is a joke. There is no racing except for the first lap or two of a re-start and then they get strung out. Again, as I said, BORING!
I bet Sprint is glad to be done with NASCAR. And their last All-Star race will always be remembered as a non-race and a waste of a huge amount of cash to sponsor it.
I say move the All-Star race or drop it. Good riddance.