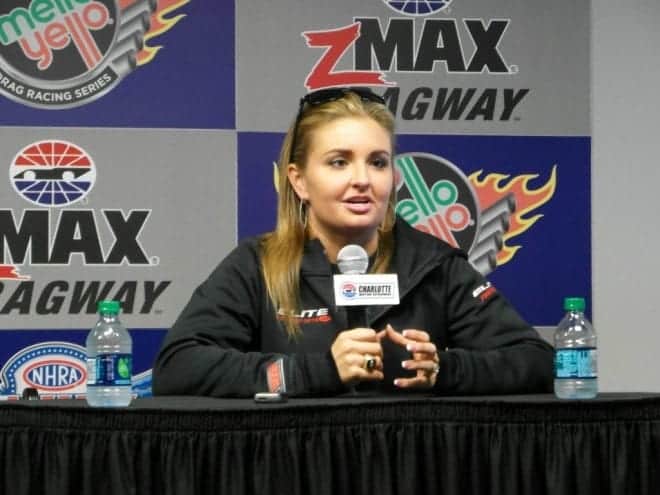 This weekend in Las Vegas, drivers in NHRA’s Pro Stock category will compete in a special bonus event, the K&N Horsepower Challenge. (Think All-Star Race.) So what’s on the line? A nice check to the tune of $50,000 for the winner and, of course, bragging rights.

The two Saturday qualifying rounds will also serve as eliminations for the eight car K&N Challenge field, with the final being an extra pass on Saturday for the remaining two lucky drivers.

Erica Enders-Stevens doubled up and won not just the K&N Horsepower Challenge but the whole weekend last season, something she’d surely love to repeat given the sluggish start she’s gotten off to this year.

“Vegas will always hold a special place in my heart because it was my first win with Elite and we were able to double up there,” Enders-Stevens said. “Then we went there in the fall and won the race to take over the points lead for the championship. We swept the Vegas races last year, so we’re really excited to go back, especially coming off a successful test in Charlotte. It gives us a little boost of confidence.”

She’ll have her chance. She’s one of the eight drivers competing, along with Shane Gray, the number one seed, Allen Johnson, Vincent Nobile, Chris McGaha, Jonathan Gray, Jason Line and V. Gaines. The front seven earned a spot in the field based on qualifying results over the past year, while Gaines was the winner of the eighth spot via fan vote.

Don’t worry, drivers in the other Mello Yello Series categories are not left out of the bonus fun. Top Fuel and Funny Car pilots will contest the Traxxas Nitro Shootout at the U.S. Nationals in August while Pro Stock Motorcycle riders have the MiraMonte Records NHRA Pro Bike Battle during the NHRA Sonoma Nationals on July 26. Eveyone gets a piece of the fun!

“It’s not just that these cars basically refuse to listen to everything you want them to do, but there are also going to be 15 other teams in the race and every single one of them is good enough to win. You add it all up, and you better not get too proud of yourself when it goes good. You also better not get down on yourself when it doesn’t, because none of it matters when you get to the next race.

“Gainesville was great, and we could’ve won the whole thing but there’s nothing you can do when Ron Capps beats you by a half-inch when you’re both running over 300 miles an hour. Then we got to the 4-Wide deal, and it’s like you’ve changed sports for a weekend. You bring your football helmet, and they put you in at shortstop. You spend a lot of energy trying to concentrate on things that are very different, but then we really never got to see if we had a chance to win some rounds there, so you just forget about it. We got tripped up, but it’s over and now we head to Vegas. Nothing we did in Gainesville, or in Charlotte, has anything to do with how we’ll do this weekend. It’s a clean slate.” – Funny Car driver Tim Wilkerson, who lost a heartbreaker in the finals at Gainesville and then failed to make it out of round one in Charlotte due to some confusion on the starting line.

Driver of the Week: Andrew Hines

Any racing series has rules and with rules comes the specter of disqualification for not following them. So what are some things that can get a time thrown out or, in the case of eliminations, can get a driver disqualified? The most obvious one perhaps is red lighting. This is most commonly the result of jumping the start, or crossing the starting line before the green light comes on. Drivers can also get a red light if they fail to stage properly, as happened to Hagan at the 4-Wides when he failed to light the second staging light in time.

Hagan’s teammate Capps also got disqualified during eliminations at the 4-Wides for another fairly common infraction, crossing the lines. Essentially this means going out of bounds. Technically Capps tapped the wall, but it’s still considered out of bounds, just as if he’d crossed the center line.

There are a few occasions where drivers can get a pass on these disqualifications. Drivers on a single-car final run will not be disqualified for crossing the center line. As for red lighting, in eliminations, if both drivers should happen to do so, the one who red lights by the smaller amount will continue.

Robert Hight of John Force Racing provides the tech fact for this week, talking about some of the safety features found on funny cars that help to keep both drivers and spectators safe.

This will be two-time Pro Stock champion Line’s 11th appearance in the K&N Horsepower Challenge but he has yet to win one, finishing as the runner up three times so far. Teammate Anderson, who has also run the event 11 times, has been much luckier and is tied with Kurt Johnson for most wins with four. Anderson will not be running in this year’s edition however.

NHRA hits Sin City this week April 10-12 for the 16th annual SummitRacing.com NHRA Nationals from The Strip at Las Vegas Motor Speedway. This race weekend will also include the K&N Horsepower Challenge for the stars of the Pro Stock category so don’t miss the live broadcast on Saturday night!