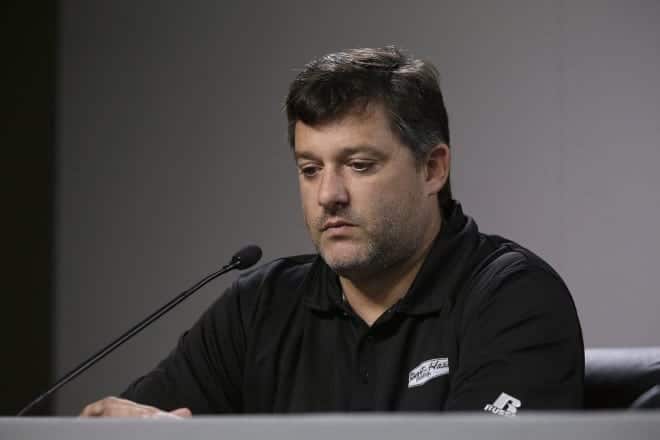 After weeks of speculation, the first questions have been answered in the Tony Stewart–Kevin Ward, Jr. tragedy. In case you somehow missed it, Stewart hit and killed Kevin Ward, Jr. during a sprint car race in New York State on Aug. 9 of this year. Ward, apparently angered at Stewart for spinning his car out, got out of his vehicle and approached Stewart, who was circling the track under caution in his own machine. Ward was struck by the right rear wheel and thrown down the track. He was pronounced dead at a local hospital, and the investigation began — one that has dominated the racing headlines ever since.

The case was heard by a grand jury on Sept. 23 and 24, and after less than an hour of deliberation, Stewart was cleared of both second degree manslaughter and criminal negligent homicide, the two possible charges he might have faced. With that came the revelation that Ward had marijuana in his system at the time of the crash, at a level which could have impaired his judgment that night, according to Ontario (N.Y.) County D.A. Michael Tantillo.

According to Tantillo, while the jury was only charged with the task of determining whether Stewart was at fault for Ward’s death. However, Tantillo stated in a press conference Thursday, “I am sure, from their deliberations and discussions, that the fact that Kevin Ward was observed running basically down two thirds of the track, into a hot track in the middle of other cars that were still racing, played a big factor in their decision.”

Tantillo said that after extensive examination of two videos, including track footage that was not released to the public. “The videos did not demonstrate any aberrational driving by Tony Stewart until the point of impact with Kevin Ward, at which point his vehicle veered to the right up the track as a result of the collision,” said Tantillo. “Prior to that, his course was pretty straight.”

In the end, everybody (with the unfortunate exception of Kevin Ward, Jr. on that fateful night) got it right. The D.A. was right to send the case to the grand jury, because it removes any question of bias toward Stewart and his star power. Kevin Ward, Sr., Ward’s father strongly hinted, in his initial reaction that he felt that Stewart would try to buy his way out of any charges; taking the case to the jury erased that speculation. It also allowed the D.A. to subpoena some witnesses whom he said had refused to give a statement to police after the incident that could have been important evidence.

And the grand jury also came to a just and logical conclusion. At the end of the day, it’s hard to ignore or dispute that Ward would still be alive had he obeyed track rules and stayed in his car until track safety workers got to him. Ward, who had a reputation among local racers as a hothead, chose to confront Stewart, perhaps to get his own 15 minutes of fame, by running onto a racetrack among moving cars, while wearing a black driving suit, at night.

It is sad that Ward’s family can’t seem to accept his accountability. Kevin Ward, Sr. said after the verdict that people should focus not on his son’s actions, but on Stewart’s. Everyone understands the Wards’ grief for their loved one, including Stewart. There will almost certainly be a civil lawsuit, but that doesn’t change that there was no evidence of a crime, that Kevin Ward, Jr. played a major role in his own death. Hopefully, time will help them to see that sometimes things happen and there is nobody to blame, or that the blame lies in the last place where they want it to. They shouldn’t yet be grieving for a son and brother so young, and perhaps time will bring them some closure, a little peace.

Stewart will also never be the same as he was before that night. Whether the jury lays blame on him or not, he will know for the rest of his days that he played a role in another person’s death. It was a tragic accident, and one Stewart will never get over. Like the Ward family, he deserves empathy and understanding. Knowing he won’t have to endure a criminal trial is probably of little comfort.

No matter what happens next, we all need to take something away from this incident: life is often too short, and it is precious. The loss of Kevin Ward, Jr. was a terrible accident, one that changes his family and Tony Stewart forevermore. The investigation and grand jury handled things right, and now the time to heal begins. It’s time to keep the Wards and Stewart in our thoughts and sympathies, but to stop the speculation and the feeding frenzy. The time for that is past, and the only way to go is forward.

…Well I find it very interesting looking at various blogs, columns etc. These very people who felt Tony was above the law and should not have been even questioned…well because he after all is TONY STEWART, are now thrilled at the outcome. I find it very narrow minded and hypocritical the very system you condemn (for hundreds of “fan” reasons, all non-rational) are NOW singing the systems praise, LOL. Again, no dog in this fight, but I did watch with interest. For the record I never liked and do not like Tony..(not saying anything against his skills or accomplishments), but the stuff written against the Ward family and in praise of the typical hero worship of a athlete made it tough to take, as Tony suddenly became a saint…My two cents. Prayers still for the Ward family.

I have to agree with KB on this one. I might add that there is no healing to be done here other than by the Ward Family. their loss is irreparable. If by “healing” you mean for Stewart’s image to be restored, I doubt that’s going to happen with a lot of people..

The outsiders who held their breath for weeks, eagerly awaiting the destruction of Tony Stewart as a competitor, businessman and human being in return for whatever imaginary slight he committed against them will now have to wait for the civil suit to take up the cause of sainthood for Kevin Ward.

I strongly disagree comments from Russ and KB. First of all, I never once read any comments on any websites that said Tony was above the law. Yes, there were some people who who were convinced from the very beginning, based on the video of what happened, that Kevin Ward was responsible for his own death, but I don’t know of any reasonable person who didn’t think that a full investigation was necessary. No one is singing Tony Stewart’s praises; nobody has called him a saint. However, quite a few people, even many like myself who have never been a fan of Stewart, are glad he wasn’t charged with a crime. It was an accident, and the grand jury has cleared Stewart of any criminal wrong-doing. In my opinion, an innocent man being cleared of crime is a good thing, whether you like that person or not.

Also, unless you know what is in Stewart’s heart, you don’t whether he is hurting or not. To say that he doesn’t need to go through the healing process, or to imply that he’s only concerned with his image, is conclusion based on prejudice.

Carl D. I did read many things about the “Sainted Tony” and the “Evil Ward Family” all over the internet from various columns and comments. It has nothing to do with agree or disagree it is what I witnessed with me own two eyes causing me to comment. It saddened me greatly to read. I felt many columns and comments were extremely immature and cruel towards Tony and the Ward family. Of course not all fans, but it seemed a good deal. They did circle the wagons and justice for Tony via the legal system be damned. I am putting it out there as to what I read. I was amazed the stance the “fans” took against the system which I felt could do nothing but help Tony. Fans screamed the DA was grandstanding, he doesn’t need the Grand Jury, how could it have gone this far, Tony is a good guy, horrible things said against the victim and his family, etc. They were against the investigation, against the Grand Jury, which I felt and still do that was the best for all concerned. The list can go on as to what his “fans” said against the Ward family because he is Tony Stewart and how dare law enforcement or the Ward family do this to him. Again not all but many. And no, nobody to that extreme degree on this website, sans a column or too displaying many of the attributes I mentioned, not this author.

I’ll back off on my criticism of your comments because I certainly can’t know what you read. My experience reading the comments on CNN and ESPN websites was definitely different than yours. Even yesterday when the news was revealed that Stewart wouldn’t be charged, there were posts that stated that Tony obviously “bought off” the grand jury and that he should have been charged with murder. I accept that anyone with a computer but lacking any sense whatsoever can post whatever they want on the internet, and I probably shouldn’t get so upset about what I read. Still, after hearing Nancy Grace’s comments and listening Collin Cowherd’s rants, I have had it up to my eyeballs with the media feeding frenzy and the mob mentality of people ignorant of the facts in this case. I don’t know Tony… he may be a real gentleman or a complete jerk, but no one deserves to be crucified for an accident.

You have hit upon many of my points, no argument.

I can’t believe that Ward was on pot during a race. Pot slows your brain down. I feel very sad for the family.

The fact that Ward was driving stoned or semi stoned erases any credibility the Wards have. It’s over. Time to move on and hopefully learn something from the whole tragic incident.

it should be noted that it is not for a grand jury to establish guilt or innocence but to determine if there enough evidence to warrant a trial.

My feeling is that here is far too much human emotion tied up in this situation to present ANY opinion as fact. All indications are that the Ward family with seek a civil suit, to which they are legally entitled and if so this isn’t over. Not even close.

I do believe no one will win here.