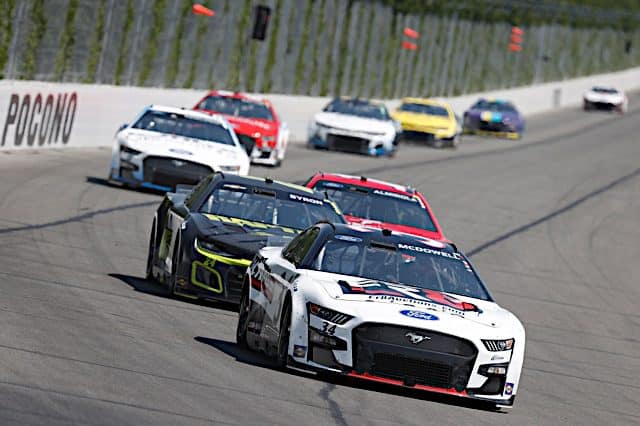 Quite simply, Pocono Raceway is a strange place. It’s considered a tri-oval superspeedway, but can race like a road course. It also provided one of the quirkiest races of the entire season. There are two major stories that stood out from the race, one that occurred during it and one that didn’t.

Of course, the instance that occurred after Sunday’s (July 24) race was Denny Hamlin and Kyle Busch getting disqualified for Joe Gibbs Racing screwing around underneath the vinyl wrap. That’s simply not going to work with how tightly the Next Gen car is officiated.

These disqualifications came down long after the broadcast of the M&M’s Fan Appreciation 400 was done and dusted. That means that the true winner’s interview didn’t occur until Chase Elliott did what amounted to a Zoom call Monday (July 25).

In order to analyze this mess, we have to look to NASCAR RaceHub on FOX Sports 1. On Monday evening’s show, they had Larry McReynolds front-and-center to help explain what happened with the help of a specific tweet from Joe Gibbs Racing and audio from Scott Miller, who appeared Monday on SiriusXM NASCAR Radio.

McReynolds described this situation as another sign that NASCAR is simply not cool with teams messing around with the car in any way. While that is definitely true, this is apparently a new rule.

Back on Wednesday, NASCAR issued a rules bulletin that Bozi Tatarevic talks about in this tweet:

The first change is the addition of a section Q to rule 14.1 stating that parts cannot be added or modified to affect aerodynamic properties of the vehicle. pic.twitter.com/PZIgJCc6G9

This situation with the Gibbs cars came after they apparently violated this new rule. The only reason this didn’t happen earlier this year is that there wasn’t a rule about it yet.

However, the two sources used resulted in a substantial discrepancy. JGR claimed that it was one piece of clear tape, while Miller said it was multiple pieces of vinyl. Someone isn’t telling the truth here because both explanations cannot be true.

The discrepancy is not FOX Sports 1’s fault. It’s the fault of whoever decided to not be fully truthful.

I thought that NASCAR Race Hub did a decent job breaking down the situation. Unfortunately, without the ability to actually see what was underneath the vinyl, it hurts what the show could do. That said, as McReynolds stated, this might not be over. NASCAR is in possession of Hamlin and Kyle Busch’s cars and they are currently at the R&D Center in Concord, N.C. It is possible that additional penalties could be levied. Stay tuned.

My guess is that one or both of the noses on the JGR cars were previously used and got hit in some way. They used the vinyl tape to repair it due to the parts shortages instead of dumping it and never got it recertified by NASCAR.

The other notable story of the week was that the Hamlin-Ross Chastain duel heated up once again late in the race.  You probably know what happened here, but we’ll put the video in here to expedite things.

When this crash happened, the MRN Radio broadcast was hyping up the fact that Hamlin was right behind Chastain and that they thought that heck was going to go down. Sure enough, the heck went down, but I found the playing up of the rivalry to be a little annoying. That did not happen on USA.

I will state that the radio call on MRN Radio made it sound way more intentional than it looked on USA. That said, it looked pretty clear to me that Chastain held his line. He didn’t do anything wrong here, other than being Ross Chastain. Hamlin just came up the track and more or less rooted Chastain into the wall, but did it in a subtle way. In other words, he didn’t make it look obvious.

See also
Denny Hamlin, Ross Chastain Tangle at Pocono: "What'd You Expect Me To Do?"

Chastain didn’t come out and say that this mess was intentional, but he knew it was. He said that he had it coming. On MRN Radio, he described the crash as “he cashed in on me,” as if Hamlin had previously won a “Money in the Bank” ladder match on a WWE pay-per-view.

Prior to the race, Ty Gibbs was the big story since he was tapped effectively out of bed to drive the No. 45 in place of Kurt Busch, who suffered a concussion in a qualifying crash. During the race itself, Ty didn’t really get that much coverage. More or less, the decision was made to see what Ty could do in the Cup car with no actual practice. You started seeing more coverage of Gibbs later in the event.

Truthfully, Countdown to Green was a little rushed Sunday since the start of the race was moved up due to potential weather. They moved it up just enough. That said, I liked what they came up with. It was a lot more focused and served as a better preview for the race than what the full-length show might have looked like.

I think the race would have been cut short had they started at the scheduled time not just due to rain, but lightning as well. Watkins Glen International wasn’t dissimilar to this, although it was not the same storm that caused issues there. Although the schedule was not changed, both Saturday and Sunday saw torrential downpours show up right after the racing for the day was complete.

As far as the on-track product, the Next Gen car put on a decent race. It was possible to get away from the pack, as Kyle Busch showed early on, but there was a decent amount of racing that USA showed viewers. Having that extra 120 or so horsepower helped quite a bit.

Post-race coverage was right about what was expected had the race finished right on time. Viewers got interviews with the top five finishers (pre-DQs), along with Gibbs. There were also point checks and post-race analysis before USA left Pocono.

Overall, this wasn’t a bad race broadcast by any means. It was pretty average, to be honest. Nothing really glaring showed up on here. Then again, it didn’t really stand out, either.

That’s all for this week.  Next weekend is a very busy one for race fans in Indianapolis. The Indianapolis Motor Speedway is hosting a tripleheader with the NASCAR Cup Series, the NASCAR Xfinity Series and the NTT IndyCar Series. All three of these series will be live on NBC.

Meanwhile, seven miles to the northwest on U.S. Route 136 (Crawfordsville Road), the NASCAR Camping World Truck Series and the ARCA Menards Series will be at Lucas Oil Indianapolis Raceway Park. It should be a very busy couple of days. TV listings can be found in the Television drop down menu above, or right here.

We will provide critiques of the Cup, Xfinity and INDYCAR races in next week’s edition of Couch Potato Tuesday here at Frontstretch. The Critic’s Annex will take a look at the Xfinity and Truck races from Pocono.

I found that USA concentrated too often on certain ‘battles’ on the track, and seldom gave a long view of what was happening anyplace else on the track. Hard to get invested when they put it under a microscope.

I don’t know why, but this was the first week since NBC took over that I didn’t feel like they guys in the booth were yelling the entire time. I only had to mute the TV twice. Much more enjoyable to watch.

I guess we will find out more about “the tape” as the week goes on. I will be surprised if there are additional penalties on Wednesday but we’ll see.

I had to laugh when Jeff Burton confused corners and did a “he gets loose off turn 3, uh, turn 1” and then compounded it with a reference to “turn 4” when it says “What turn 4?” right there on the wall. He only raced there for how many years?

The change in the rule to me implies that NA$CAR found out what Reverend Joe was doing with the “Vinyl” and told them not to do it anymore. Maybe the 18 and 11 were the only ones to do it but I doubt it. According to the rules they only check the first and second place cars and another one. I’m sure they had no intention of checking the other 4 Reverend Joe cars, just in case.

If it turns out that there was more than just one layer of tape on both corners of both cars, there can be no doubt as to the motivation behind this action. Stay tuned – if true, that would dispel the notion ” that one or both of the noses on the JGR cars were previously used and got hit in some way” and fixed via the tape.
.