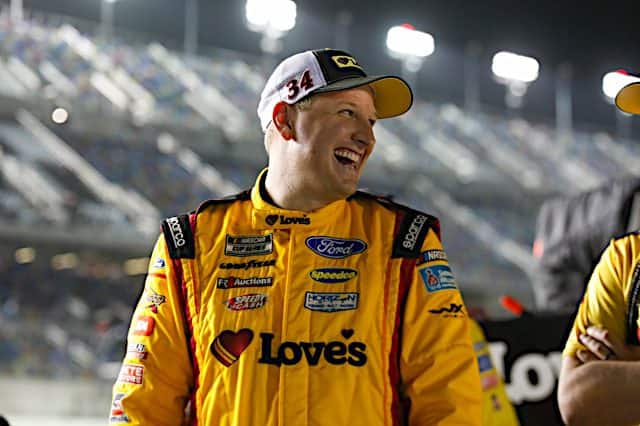 Starting 25th, McDowell steadily climbed through the field in his Fr8Auction.com Ford throughout the 160-lap race.  His No. 34 crew, led by crew chief Blake Harris, had clean pit stops and made the right adjustments as the race moved forward.

By the time stage one wrapped up under caution, McDowell had crept his way inside the top 15, running 12th before stalling out.  With numerous pit strategies playing out during stage two, the team maintained its speed but gave up a little bit of track position. By the end of stage two, McDowell and his No. 34 sat 19th.

But a call from the pit box during the final stage is what ultimately worked in McDowell’s favor. When Ryan Blaney spun to bring out the caution on lap 137, the No. 34 team opted to stay out for track position, moving up to 14th on the ensuing restart. This move paid immediate dividends, McDowell dodging the incident involving Ross Chastain and Kevin Harvick while gaining five spots to ninth.

That is where he was on the final restart with 13 laps to go.  McDowell made his way as high as seventh until giving up a spot to Kyle Larson late to cross the line in eighth. However, McDowell was later bumped up to sixth after the top two cars, driven by Denny Hamlin and Kyle Busch, were disqualified during post-race inspection.

Pocono continues what has been a standout season for McDowell. He now has eight top-10 finishes in 2022, the most the Daytona 500 winner has ever had in a Cup Series season, with 15 races still to go.  His previous high of five top 10s was set just last year.

In addition to being the top underdog this week, McDowell also showed the way for the blue oval crowd by being the only Ford driver to finish inside the top 10.

For most of the race, it looked as if Erik Jones would take home the title of top dog at the Tricky Triangle.

The No. 43 Focus Factor Ford had speed right off the hauler at Pocono, posting the sixth-fastest lap in practice. However, a poor qualifying effort in 34th took some of the wind out of the No. 43 team’s sails. To add insult to injury, both Petty GMS Motorsports teams were hit with an L1 penalty on Saturday for violations related to the rocker box assemblies, costing Jones 35 driver points and crew Dave Elenz.

But once the green flag flew, Jones and the No. 43 crew put their recent adversity behind them. He weaved his way through the field with ease, using the help of early cautions that bunched the field back up.  When stage one wrapped up under caution, Jones banked a solid six points for his fifth place stage one finish.

Jones really made his presence felt in stage two, making his way into the top five and then the lead on lap 73. Jones led 10 laps before pitting and ended stage two in third, boasting the best fuel mileage strategy until some cautions reset the field.

Jones still maintained near the front during the final stage, sitting inside the top 10 for the final restart with 13 laps remaining. However, some tough choices in traffic shuffled him back, dropping him to 11th before those double DQs produced a top-10 result (ninth).  His Petty GMS teammate Ty Dillon didn’t fare so well, spinning out at one point and winding up 22nd in the final results.

There was a last-minute addition to the underdog lineup this weekend when 19-year-old Ty Gibbs got the call to make his Cup Series debut as a substitute driver for 23XI Racing in the No. 45 McDonald’s Toyota. He replaced Kurt Busch, who was not medically cleared to race due to concussion-like symptoms sustained in a turn 3 wreck during Saturday qualifying.

Gibbs started from the rear because of the No. 45 team going to a backup car and driver.  As a result, the rookie went into the race with a mission of logging laps and putting his best foot forward.

“All I want to do is just have a good finish and do the best I can,” Gibbs said in a pre-race interview outside the No. 45 team hauler.  “If that’s winning, that’s winning. If that’s finishing 30th, that’s 30th.  I just want to learn as much as I can.”

Gibbs acquitted himself well under unusual circumstances, staying out of trouble and bringing the car home in 16th.

All eyes on Ty. 👀 pic.twitter.com/2Xk2xaqwKZ

All the other underdogs had uneventful afternoons. Ricky Stenhouse Jr. fluctuated in the middle of the pack running his No. 47 Kroger/SweetLeaf Chevrolet for JTG Daugherty Racing. He started 19th, dropped to 29th in stage one, jumped to 17th in stage two, then stalled out with an 18th-place final result.

Behind him came both Kaulig Racing Chevrolets. Justin Haley flowed up and down the scoring pylon as pit strategies unfolded, including a brief stay inside the top 10. Ultimately, the Winimac, Indiana native settled for 21st place in his No. 31 LeafFilter Gutter Protection Chevrolet.  It was Noah Gragson’s turn in the rotation for the No. 16 Gold Fish Casino Slots Chevrolet and he followed up his Xfinity Series victory the previous day with a 24th-place finish at the Cup level.

It was a day to forget for Spire Motorsports. Corey LaJoie spun off turn 1 on lap 45 of 160; he limped home with a 19th-place finish.  LaJoie did fare better than teammate Josh Bilicki, who crashed in turn 1 following a mechanical failure on lap 36. That left Bilicki 34th in the finishing order, the third DNF in his last four Cup starts.

A mechanical failure ended our day early at @PoconoRaceway. Big hit but I’m good. So bummed for @SpireMotorsport’s and our partners. The 77 team brought me a great car and our day was looking very promising. Need to turn our luck around! 🥴

While McDowell earned the title of top dog, his Front Row Motorsports teammate Todd Gilliland could not replicate that success.  The rookie quietly steered his No. 38 A&W Root Beer Float Ford to a 25th-place finish.

Finally, bringing up the rear this week were Rick Ware Racing and the Live Fast Motorsports Ford driven by B.J. McLeod. RWR’s two cars struggled to keep pace, moving up only through retirements or others’ misfortune. Cody Ware piloted the No. 51 Nurtec ODT Ford to 26th while J.J. Yeley finished a lap down in 28th running the No. 15 Ollie’s Bargain Bin Ford. McLeod drove his No. 78 Surface Screen Ford to a 30th-place result, two laps off the pace.

Michael McDowell (6th): “It was a good day. I had a couple good restarts that got us track position, then I had one really bad one where we got hit in the left rear and about spun out and went back to last. That hurt us really bad. My guys called a good race and we tried some different strategies to try to get track position. We stayed out on old tires but I felt like if I got a good restart and got into the top 10, I could hold on. We restarted 16th with no tires and drove up to eighth (sixth after DQs) so I am really proud of that finish.

“It is still not the day you want. You don’t want to be eighth, you want to win the race, but we are doing a great job and I feel like we are getting close.”

Ty Gibbs (16th): “First of all, I want to say thank you to God for giving me this opportunity, thank you to Michael Jordan, Denny Hamlin, and everybody at 23XI Racing. The most important thing right now is… Kurt’s health, and hopefully he gets back in this seat. He drives way better than me. He deserves this. He’s been awesome. I want to say thank you to him. We had a fast McDonald’s Toyota Camry TRD. I had a great time, and I learned a lot.”

LaJoie brought the smackdown to Pocono this week with a new paint job promoting the WWE and its upcoming Summerslam event, streaming July 30 on Peacock. The car was given a black base with purple and light blue waves along the sides and WWE logos all over the body.

The hood of LaJoie’s No. 7 Chevrolet featured WWE Superstars Roman Reigns and Brock Lesnar, both of whom are scheduled to compete in a main event match at Summerslam for the WWE Universal Championship. Spire Motorsports unveiled the scheme in a video posted to the NASCAR on NBC Twitter account on Tuesday, July 19, with LaJoie sporting a replica WWE Championship belt.

Check out the @WWE #SummerSlam car for @SpireMotorsport this weekend at @PoconoRaceway.

Then check out Summer Slam on July 30 on @peacockTV. pic.twitter.com/fPbZ5mQGrA

The Cup Series regular season is hitting the home stretch, with 21 races down and only five to go until the start of the playoffs.  That means only five more opportunities for an underdog to potentially pull off an upset win and shake up an already crazy playoff picture.

Here is the latest Top Dog count for the season.

Daniel Suarez (no longer on the underdog list): Richmond