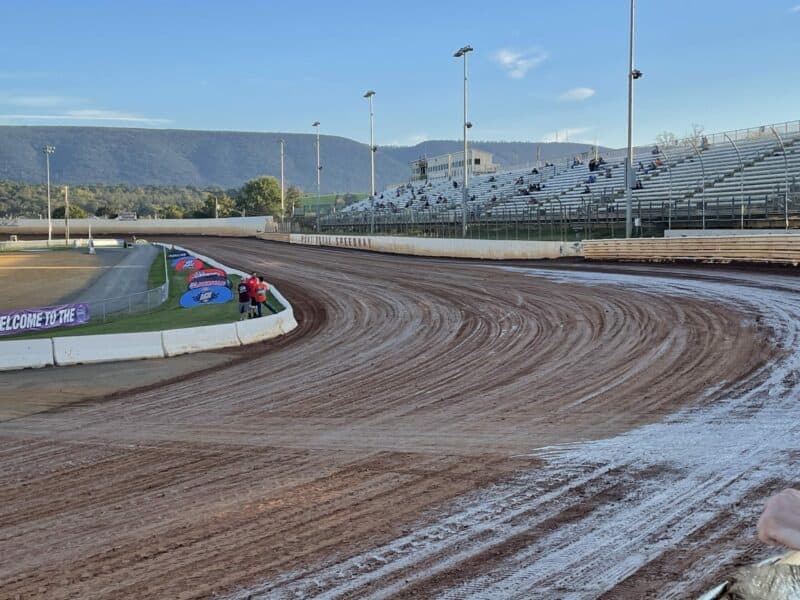 ONE: No One Gets McCarter/Winger Controversy Right

There’s no getting around it, Mack McCarter’s move dooring Ashton Winger off turn 2 at I-75 Raceway in Tennessee Tuesday night (July 19) was a filthy move, possibly the nastiest super late model racing has seen in 2022.

51 was going to do whatever it took to keep the lead. Ridiculous. pic.twitter.com/oHBa7txN50

And it’s not hard to understand why Winger would be furious about being the victim of said move. Not only did Winger lose a racecar and go for a nasty tumble, this occurred for the same driver/team that already lost a car last month on the DIRTcar Summer Nationals circuit and that got so far behind that they had to drop out of campaigning for the Lucas Oil Late Model Dirt Series Rookie of the Year crown.

But, despite having a legitimate list of grievances a mile long, Winger ended up just adding to the list of wrongs when he went after McCarter not once, but twice, while McCarter was still strapped into his racecar.

Winger was not a fan of being doored every time he made the pass pic.twitter.com/KYUkb80H8W

I’ve been consistent on this as long as I’ve written at Frontstretch, be it Clint Bowyer throwing sucker punches at Ryan Newman after the 2019 NASCAR All-Star Race or Logan Wagner going after Anthony Macri under a red flag at Port Royal earlier this season. And as bad as Winger got it this Tuesday night, it’s still not OK to attack someone in restraints.

I don’t disagree with Winger’s comments to DirtonDirt that McCarter needed his ass kicked for driving in that manner, but if that in fact was Winger’s intent going after a man in a helmet and containment seat isn’t going to accomplish anything.

Of course, this is even more likely to happen now that the Southern Nationals sanctioning body opted not to penalize McCarter in any way shape or form for his dirty driving, while at the same time suspending multiple members of Winger’s crew that went onto the track after the crash.

Nothing more to say other than this is a damn shame and beneath super late model racing. The upper tiers of this sport have been racing for sums far larger than the $4,053 purse on the line Tuesday night all year long, and have somehow managed to do it without trashing each other’s cars.

TWO: Can’t Say That Tracks Canceling for Heat Are Wrong

There’s no getting around it, there have been more preemptive cancelations of dirt track races for reasons not relating to rain in 2022 than likely any other year in the history of the sport (excluding 2020 anyway). Tire shortages, poor advance ticket sales in an environment of streaming proliferation and economic pressures, insanely high fuel prices, all of these elements make the already-narrow margin for profit on dirt race promotion even slimmer.

And the last week or two has seen a number of tracks add a new reason to that list … the scorching summer heat. For one of the more dramatic examples, check out the Centerville Super Speedway in Arkansas.

Using heat stroke in what is in effect a press release is a bit of showmanship, no doubt. But as frustrating as the situation is, I can’t fault Centerville or any other track canceling for the reason, and on several fronts. Yes, 105-degree heat is very uncomfortable and can pose a health risk, especially, unfortunately, for a sport whose audience skews older.

But more than that, extreme heat also creates risks for the racing product itself. Dirt track prep is intensely reliant on a track retaining moisture, which triple-digit temperatures makes very hard to do. Get that part of track prep wrong, and the likelihood of either a dust bowl or a track taking rubber and turning into a parade goes way up.

Fans attending dust bowls or rubbered-down single-groove races aren’t going to come back even if it’s 72 and breezy.

Fresh off a trip to Eldora Speedway that saw Pennsylvania Posse driver Brent Marks sweep both the Historical Big One and Kings Royal, marking the first time in history any sprint car driver had done that, the regular drivers of the World of Outlaws tour were swept off the podium at Port Royal Speedway Wednesday night (July 20). NASCAR Cup Series regular Kyle Larson scored the win, while Posse drivers Danny Dietrich and Macri finished second and third.

These are just the latest episodes that have seen said Outlaws regulars take a back seat in 2022. Larson and Giovanni Scelzi broke through and scored wins during the WoO west swing back in March, while Marks also scored the win when the Outlaws returned to their actual home track at Devil’s Bowl in Texas.

The Outlaws still have tons of talent in their ranks with Brad Sweet, David Gravel, Sheldon Haudenschild and Carson Macedo in their ranks, as well as veteran Donny Schatz. But, I’m starting to wonder if this reality is going to have some bigger-name sprint car drivers thinking about going “outlaw” as opposed to World of Outlaws racing in the near future.

Super late model racing has already seen several of its top stars dump national tours to chase money races, and with Marks proving it can be done this year, as well as Larson’s midweek sprint car tour starting up next year, it may well be that this dip in supremacy from the WoO regulars may extend beyond victory lanes in 2022.

FOUR: Either Use Time Trials or Don’t

Tuesday night I made a trip to the Spirit Auto Center Speedway in New Jersey to catch part of the 600 Speedweek for micro sprints being contested in the northeast this week. And while a 77-car field is a wonderful thing, one part of the program I was not looking forward to seeing, and didn’t enjoy was seeing 77 micro sprints take time trials.

I will admit my eye isn’t trained, but even after watching thousands of dirt races I had absolutely no way of knowing who was going to run fast and who wasn’t in micro sprint time trials. Rather than watching said time trials for performance, the exercise turned into a hypnotic bore of hoping no one did damage to their machines before the heat races.

Yes, 600 Speedweek is one of those rare instances where the micro sprints are the headline class, and as such they seldom get the chance to time trial. But just as racing on the inner oval of the larger Bridgeport Motorsports Park (Spirit Auto Center Speedway is the sponsor name of the track’s small inner quarter-mile) comes off as underwhelming, so does watching micro sprints on the track a couple at a time.

It’s not like watching super late models or modifieds that make the grandstands shake whenever they come by, and in the case of those classes of car even an untrained eye can pick up on where a driver is succeeding and failing on track.

Ice the time trials and get the show done 30 minutes earlier with a pill draw. Sometimes less is more, like motorcycle-powered micro sprint cars.

I will be manning the Frontstretch editor’s desk this weekend with my buddy Mark Kristl, so Thursday night (July 21) was the last chance I’d have this week to see a new racetrack, and the closest said venue ended up being the figure-8 race at the Lycoming County Fair in Pennsylvania.

Talk about tight confines. It was borderline impossible for drivers to make the turns without scraping the jersey barriers in place to enclose the track. And the grandstands were equally jammed, with the covered stand at near capacity for the racing event.

That crowd was the observation that stuck with me. The figure-8 race may as well have been a demolition derby, with the novelty having worn off before even the first 10-lap event for the compact SUV class was over. But the crowd was huge and dense, dwarfing those that were at the fair for the rides and the games.

It made me wonder if dirt racing as a whole isn’t missing out on a major opportunity here. While in the midwest and in California, a lot of weekly racing is actually conducted on county fairgrounds, such is not as frequently the case on the actual East Coast.

With huge captive audiences looking for entertainment while they’re eating the myriad junk food that a fair provides, actual dirt oval-track racing would be well-served to find a way into this fairs. The track surfaces are not representative of a prepped dirt track (Lycoming’s figure-8 had plenty of sediment other than clay on it), but there’s no reason a 4-cylinder buzz bomber or something close to it couldn’t race in these environments.

With crowds the size I saw this Thursday night, actual dirt tracks need to take notice. There’s no reason to leave events this well-attended to the ranks of junk cars.

Sadly, on this same Thursday came the awful news that the rejuvenated West Virginia Motor Speedway has closed for the rest of 2022, not finishing its second season back after being dormant for nearly a decade.

The reasons are obvious. WVMS has struggled with car count since it reopened last year and sans the Lucas Oil Late Model Dirt Series, the crowds on the hillside at the track have not matched what they were a year ago. And yes, the timing sucks that a track that at 0.625 miles is the dirt equivalent of a superspeedway came back to life in an environment where parts and tires are at a premium.

There’s been plenty of call for WVMS to build a smaller bullring track in lieu of its larger configuration, as that model has been successful in rejuvenating both the Bloomsburg Fair Raceway in Pennsylvania and the Davenport Speedway in Iowa. I wouldn’t mind seeing that happen.

But, not at the expense of the huge WVMS oval. Yes, running the WVMS oval is HARD on equipment. That doesn’t mean racing doesn’t have a place there. Super late models, 410 sprint cars, they should be running on tracks where equipment gets taxed. Not on the regular, but a schedule of 90 races on bullrings will get just as stale as 90 races on tracks too long and too fast for passing.

Besides, if there’s one word to describe the WVMS facility itself, it’s “imposing.” Such an enormous facility needs an enormous track to go with it.

Thank you race fans! We appreciate your support and patience. You're dedication is amazing and we hope you enjoy your visit the West Virginia Motor Speedway this evening for the 2nd Annual Historic 100! pic.twitter.com/Pi8Rhc0ipm