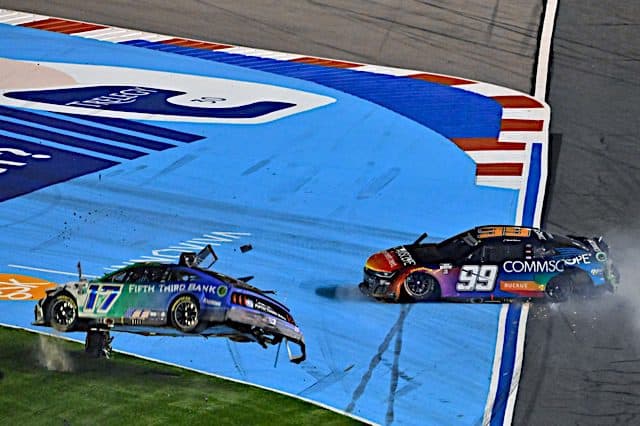 Motorsports seems to be as safe as it’s ever been in the modern era — but there’s still much to improve.

You haven’t had to look far to find a wild crash in recent days.

A bit of overzealous argy-bargy between Noah Gragson and Sage Karam set off a massive crash at a dangerous part of the track in the Xfinity Series race at Road America.

Each of the accidents were dangerous and risky. But they all saw drivers walking away under their own power due to advances in the safety of modern race cars.

Alex Albon was taken to a local hospital for tests after Zhou’s crash, but he was okay and the rest of the field emerged safely under their own power. The same was true for Hauger and Nissany after their early accident. That both Nissany and Zhou were relatively unscathed is a testament to the improved safety of the Halo cockpit protection device, which likely saved them both from head trauma.

I’m ok, all clear. Halo saved me today. Thanks everyone for your kind messages! pic.twitter.com/OylxoJC4M0

Gragson’s spiteful spin of Karam caused a disastrous crash that’s left JR Motorsports owner Dale Earnhardt Jr. unable to defend his actions. But only Brandon Brown was shaken up in the crash and everyone ultimately emerged under their own power due to the safety of modern NASCAR stock cars.

Even on the grassroots level, where accidents like Saturday’s track-stopping pileup at South Boston Speedway can occur, injuries have been largely avoided in recent years. The modern vehicles and circuits are as safe as they’ve ever been, minimizing fatalities and trauma.

That’s something worth celebrating. But it doesn’t go to say that there aren’t still issues to resolve.

Each of the first three crashes listed above had something to note for the future in regards to improved safety.

The Halo protected him when it mattered most and kept the Chinese star from suffering any major injuries.

But it’s worth noting that the car still flipped, the roll-hoop failed when he went upside down and Zhou also landed at an awkward angle in a slim gap between the barrier and debris fence at Silverstone’s first turn.

There’s also the greater potential tragedy that was missed in part because of his crash. Protestors had made their way on-track further down the circuit, which could have yielded a devastating blow had the field not already been slowed by the early crash.

Hauger and Nissany’s accident exploited the risks associated with sausage curbs. Hauger hit one while he struggled to regain control of his car and effectively launched over Nissany, yielding the risky blow to the Halo protection device.

This is far from the first incident with sausage curbs in recent years. Multiple drivers have had issues with either landing badly and hurting themselves or being launched off of one of them. The most notable of these is W Series competitor Abbie Eaton, who suffered two fractured vertebrae after contacting the sausage curbs at turn 15 of Circuit of the Americas last season.

Eaton was unafraid to share her critical opinion of the curbs after seeing Saturday’s (July 2) accident.

When will people learn?

We need to use a safer way to control track limits.

The halo has been one of the best safety systems to be introduced, let’s move forward with track limit policing too.

Gragson’s retaliatory crash wasn’t unprecedented, particularly in NASCAR road course racing. But the timing of the move meant he put numerous competitors at risk. He was penalized 30 points and fined $35,000 for the infraction.

Each of these incidents has something that could be improved in the future, whether it be tied to a piece of equipment, track design or driver behavior.

The thing is, that’s only a small smattering of the accidents and safety risks to consider. Others have been less fortunate, from the loss of numerous competitors at the infamous Isle of Man TT to the passing of American Flat Track competitor Ryan Varnes after a crash at Weedsport Raceway on Saturday.

MotoGP finds itself struggling with a toxic culture surrounding concussions. NASCAR has had to tow the line between entertainment and safety at tracks like superspeedways while also addressing perceivably slow safety team reactions.

It recently came under fire for allowing Ryan Blaney to finish the All-Star Race without his window net properly secured. The NTT IndyCar Series is struggling to find the balance with visibility for its aeroscreen cockpit protection device in wet conditions.

The common phrase uttered by most leaders in motorsports is that “safety is priority No. 1.” They’ll all allege that keeping competitors safe is of the utmost priority.

But anyone with a lick of common sense can understand why that’s not entirely the case. If safety were truly the top priority then we wouldn’t race at all. Motorsport is an inherently unsafe activity and it’s impossible to completely remove the element of risk from races.

The real key is finding the proper balance between safety and entertainment — leaning heavily on the side of safety.

As an industry, motorsports is in a better place safety-wise than it’s probably ever been. But every series has improvements to make and safety targets to keep chasing.