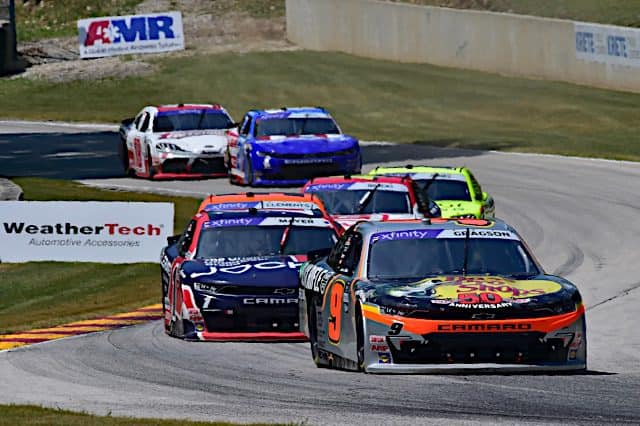 Noah Gragson has been hit with a 30-point penalty in the NASCAR Xfinity Series driver standings — and a $35,000 fine — after he caused a multi-car accident last weekend at Road America, NASCAR announced July 6.

Gragson was found in violation of sections 4.4.C&E of NASCAR’s code of conduct.

Gragson has not commented publicly on the penalty since it was announced, but JRM’s Kelley Earnhardt Miller released a statement afterward.

“We understand today’s penalty,” she said. “Noah is a passionate racecar driver, and his actions occurred in the heat of the moment. Learning how and when to keep emotions in check is all part of the learning experience.”

Gragson went on to finish eighth, while Karam was relegated to a 31st-place finish following the early wreck.

The penalty keeps Gragson in fourth in the overall Xfinity Series standings, but he is now but five points ahead of teammate Josh Berry.

“It’s one thing if you’re faster than someone, but to throw it off in there and run you off the racetrack in the corner, door you, run you off the track,” Gragson said post-race. “Finally, after the third time, I’m over it. I’m done with it.”

However, Gragson told SiriusXM NASCAR Radio that he “made a mistake” during the race. “I’m going to try everything in my power not to make that mistake again and that comes from learning from the situation and trying to be better in the future,” he said.

His team owner, Dale Earnhardt Jr., had said earlier in the day in an interview with the channel that Gragson’s actions were “crossing the line.”

In addition to Gragson’s penalty, NASCAR penalized AJ Allmendinger‘s Xfinity No. 16 team for an unsecured lug nut, with crew chief Bruce Schlicker receiving a $5,000 fine. Sean Kerlin, a mechanic for JRM, was also indefinitely suspended for a behavioral violation.

The points penalties is meaningless, and the $35K is a drop in the bucket, but I think Noah gets the point.

I’m ok with this – provided every driver in all three series that issues any kind of on-track payback receives the same.

Noah already made a post on Snapchat about selling his trading cards, skateboards and Bristol trophy so it is a complete joke to him in regards to the fine. The point reduction keeps him 4th in points so no real loss there. The only thing that the points did was make it harder to win the regular season points champion.

This wouldn’t even be an issue except that so many other cars wound up wrecked. If he had just sent only Karam sliding, you wouldn’t hear anything about it but a 13 car wreck is going overboard.

I think Gragson wasn’t punished enough. There’s no doubt that was deliberate. He should be required to write checks to each affected team to pay for the damage he caused. Points/schmoints. If there are future deliberate wrecks, the offender should pay from their pocket. NASCAR to decide if deliberate. Moving a car is racing. Deliberately causing mayhem is not.