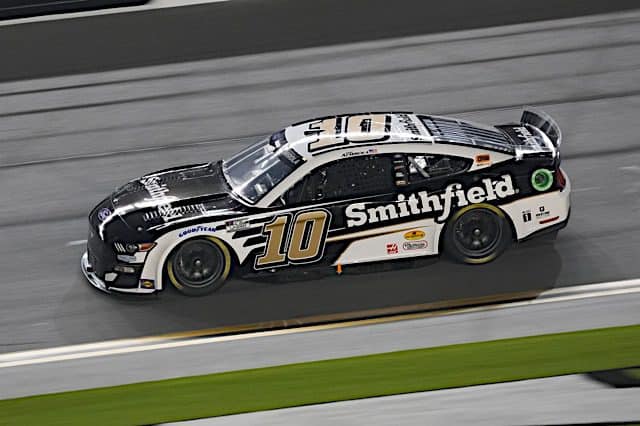 Other than Aric Almirola’s replacement in the No. 10, do you foresee any more NASCAR Cup Series driver changes for next year?

Anthony Damcott: Unless someone pulls a Carl Edwards and unexpectedly retires weeks before the season starts, I don’t see any huge changes in the future for any driver/team in the top 30 in points. Even drivers in contract years will more than likely return to the team they’re with next year, whether it’s on a one-year deal or a long-term extension. The only potential change could be to the Stewart-Haas Racing No. 4, but that’s predicated on the notion that Kevin Harvick decides it’s finally time to retire — and based on his attitude towards racing, it doesn’t seem like 2022 will be the last year. The entire silliness of the 2023 season was based on whether or not Martin Truex Jr. would return to Joe Gibbs Racing, and now that we know he is, it doesn’t seem like driver lineups will stay mainly status quo in the Cup Series for 2023, barring any extreme circumstances.

Luken Glover: There are no clear-cut changes on the horizon ever than the No. 10 currently. However, two rides stick out that could be open to change. Christopher Bell and Erik Jones aren’t sure bets to return their respective rides, but they more than likely will. Aside from them, there is Cole Custer‘s No. 41 at Stewart-Haas Racing and Tyler Reddick‘s No. 8 at Richard Childress Racing. While Custer’s dad is the president of SHR, results eventually speak. In his third season, Custer has no top 10s, a career-worst average finish and one lap led. Meanwhile, RCR has an option on Reddick and will definitely want him back. But if Reddick were to miss the playoffs and go winless, he may want to explore his options elsewhere.

Andrew Stoddard: This silly season is shaping up to be not too silly. There is the whole Kyle Busch sponsorship saga, but I do not see JGR letting a two-time Cup champion walk, especially considering Busch’s relationship with Toyota through his Cup success and his NASCAR Camping World Truck Series team. There are a couple of rides to look at in the Chevrolet camp. Jones is in a contract year for Petty GMS Racing, but the latest indications are that he is happy and wants to return to that team in 2023. The most likely driver change could be at a lower-tier Cup Chevy team, like Spire Motorsports. Corey LaJoie’s contract to drive the No. 7 Chevrolet for Spire is reportedly up in 2022. Sitting at 31st in the points, LaJoie has done little to distinguish himself, other than a fifth-place showing at Atlanta Motor Speedway. This could open the door to a full-time Cup opportunity for Noah Gragson, Josh Berry or one of Chevrolet’s other promising lower-series prospects.

If NASCAR does not return to Road America next year, which track should it race at for the July 4 holiday — if any?

Glover: As I thought of states that would fit well, one track stood out to me. Ironically, it’s in a state that Business Insider listed as the most patriotic state in a 2020 article: New Hampshire. New Hampshire Motor Speedway has great scenery and has featured great racing recently. It would be a good fit weather-wise and the fact that it is in that radius of the schedule already. I’d like to see a race on the Fourth of July weekend on Saturday night, despite NASCAR’s hesitancy to do so due to television influence. Most places will be hot, so why not try something new with Richmond Raceway? Its fall race was moved to August this season, and Virginia features both deep American and stock-car racing roots. Plus, Richmond belongs under the lights at least once.

Damcott: My heart says to put Daytona International Speedway back as the July 4 race, but that race isn’t changing because of the perceived drama it creates for playoff bubble drivers; however, with the parity of the Next Gen car creating the possibility that there could be more than 16 winners, this drama the race creates might not exist, giving more of a reason to put it back to its 4th of July weekend slot. One track that would be good for July 4 would be Nashville Superspeedway. It is already trending in that direction with this year’s races being held a week later than it was last year, so why not push it another week? Every race can be a night race, not only to avoid massive heat exhaustion among drivers but also to create opportunities for an awesome post-race fireworks show. NASCAR has also been associated with country music, and Nashville embraces the newfound racing culture within the city. That, combined with the patriotism that NASCAR often touts, could be a win all around. It could also give the NASCAR Camping World Truck Series a chance to get involved in July 4 festivities. But in a perfect world, I’d yearn for Daytona.

Stoddard: The first track that comes to my — and maybe everybody’s — mind is Daytona. Realistically, NASCAR is not going to move the second Daytona race from its current spot as the regular-season finale any time soon, given the playoff drama that creates. There are three possibilities. First, you have Richmond, a short track in a state steeped in patriotism and American history. Also, Richmond Raceway isn’t far from Washington, D.C., and it would be fitting to have a race in the area on Independence Day weekend. Secondly, you have Watkins Glen International, which could work if NASCAR wants to stick with a road course on the Fourth of July, and the likely cooler weather in New York is also a bonus. My last option will probably aggravate some old-school fans, but you could move the Coca-Cola 600 to that weekend. Now, I know what you’re thinking: NASCAR would never move the Coca-Cola 600 away from Memorial Day weekend, and you’re probably right. However, a lot of people said the same thing about the Daytona summer race, and it is now the regular-season finale in late August. NASCAR has shown in recent years that it is willing to make seismic changes to the Cup schedule, so never say never.

Of the Cup drivers running double-duty at Road America, which one will benefit the most?

Stoddard: Custer. It is no secret that his 2022 season has been underwhelming, with no top-10 finishes and currently 27th in the points standings. If this type of performance persists, Custer’s seat in the No. 41 is going to start getting warmer. Custer has also been sub-par on road courses throughout his Cup career, with an average finish of 20.2 and only one top 10 (a ninth in 2020 at the Charlotte Motor Speedway ROVAL) in 11 career road-course starts. By hopping into the Xfinity Series, Custer gets a chance to sharpen his road course skills, get more acclimated with Road America and hop back into the No. 07 Ford for SS-Green Light Racing, a team that he won with earlier this season at Auto Club Speedway. This could be a confidence boost and a jumpstart to Custer’s season if he runs well in Xfinity this weekend.

Damcott: Ty Dillon is being overlooked as someone who can gain experience. Dillon hasn’t made a start since last October when he drove for Joe Gibbs Racing at the ROVAL. While he’s definitely not in a position to win the Xfinity race without a lot of help, sometimes Cup drivers don’t need to run Xfinity races for wins. Sometimes it’s as simple as running laps, and at a road course, it’s beneficial to get extra experience to figure out general braking points, where you can afford to pass and get an idea of pit strategy. And in a season where Dillon is running right where I’d expect for a team that’s full of new experiences, just making laps in an Xfinity car could give him a slight upper hand to finish better on Sunday.

Glover: Reddick could benefit. He has improved his road-course craft and has knocked on the door a couple of times. He has proven to get results out of Big Machine Racing Team’s No. 48, so why not gain extra laps and experience to prepare for the Cup race? He sits outside the playoffs in the Cup Series currently, and it feels like a win is around the corner. This could be the opportunity that leads to it.

See also
Fire on Fridays: Is It Time to Pull the Plug on Cole Custer?

How will Justin Marks perform in the Camping World SRX Series event at Stafford Speedway?

Glover: Justin Marks has a diverse racing background and has found success in many places. I don’t see him being able to win the race, but he will likely adapt nicely. I can see him competing for a top five, but expectations would be around seventh, as low as 10th.

Stoddard: Marks’ driving experience leans more toward road courses and sports cars as supposed to short ovals and stock cars like that of SRX. That said, Marks will hold his own and come away with a mid-pack finish, about sixth to ninth.

Damcott: Marks can’t do any worse than Peyton Sellers did at South Boston Speedway. Given Marks’ experience with fendered cars, he might be able to nab a top five if he finds himself in the right spot in the closing laps. But given that he wouldn’t even be in the seat if Helio Castroneves didn’t have a scheduling conflict, Marks will just be happy to be there and compete against modern legends.

Moving the 600 to the 4th of July would greatly improve the chances of one or more drivers taking a shot at doing the Indy “Double”. A 400 or 500 mile race could start later than the 600, opening up more time for a driver (drivers) to get from Indy to another track, and more time to rest/recuperate between races. Nashville comes to mind as a possibility. It’s an hour flight, and a 400 mile night race could still start and finish at a reasonable time.

Years ago, Busch (Xfinity), Featherlite Mods and Craftsman trucks all raced at The Glen right around the 4th. I sat and watched Dale Jr win the Daytona 400 on a big screen from the Glen infield, the night before the 2001 Glen Busch race. Then watched a great fireworks show at the track, The Glen has always put on great fireworks. I’m not sure the track would want to put on a Cup race, a week after the IMSA 6 Hour weekend. I don’t know that they’d want to move the 6 Hour weekend either? A 6 Hour/Cup double header’d be a lot of fun, but since both races are well attended, I doubt the track would want to give up all those ticket sales, by combining the weekends.

Last edited 6 months ago by gbvette
0
0

With all due respect to Justin Marks, with all the drivers current and retired, the best SRX could do is Justin Marks? Why not put Snooky from Jersey Shore in it…or Hulk Hogan? Sorry Tony, but this is not real racing and we know you will eventually win anyway.