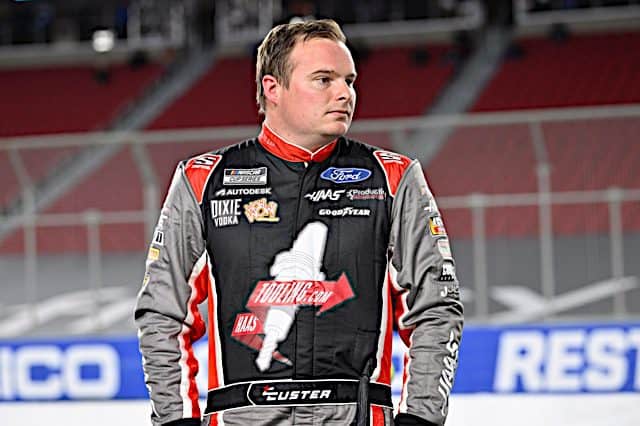 The NASCAR Cup Series’ Next Gen car has let some drivers who haven’t really been contenders in previous years become contenders.

For other drivers, they’re struggling to adapt to the changes in the car, which is OK, given that everyone is still adjusting, regardless of how good they are.

But there’s one driver in the Stewart-Haas Racing camp who might be on his way out if he can’t contend. And no, it’s not Kevin Harvick, despite his lengthy career to date.

Cole Custer has struggled to produce results in his No. 41 that he took over from Daniel Suarez in 2020. The Next Gen car should theoretically be a big help to him, but it hasn’t been. In fact, Custer’s results have not improved much since taking over the No. 41, even before the Next Gen car.

In 2020, he finished 16th in points and won the Rookie of the Year award, but it was pretty much by default. He surprised the field with a win at Kentucky Speedway on a daring four-wide move, and he made the playoffs because of it. But because he was the only rookie to win a race that season, he was guaranteed to be the highest-finishing rookie, winning the rookie title 10 races before the season ended. He wasn’t a threat for the championship, let alone moving past the opening round, and finished last in points among playoff drivers.

See also
Up to Speed: The Clock is Ticking for NASCAR Playoff Hopefuls

That Kentucky win is the highlight of an otherwise unimpressive resume for Custer in the Cup Series. Custer has 91 starts in the top echelon of NASCAR, but let’s call it 88 for the sake of equality in stats – his first three career starts came two years prior in 2018, driving Rick Ware Racing’s No. 51 (in an alliance with SHR) to get him seat time in a Cup car. In those 88 starts, Custer has just nine top-10 finishes and one pole to his credit. For reference, his other two rookie competitors in 2020 outnumber him in both stats.

Tyler Reddick has competed 90 times in the Cup Series, one less than Custer. Again, for the sake of equality, let’s throw out his first two starts that were given to him for seat time in 2019 (although one of them was a top 10). In 88 starts, he has accumulated 31 top 10s and three poles. Christopher Bell, the other major rookie contender that year, has finished in the top 10 32 times, though he has the same number of poles and wins as Custer, with one.

Custer’s stats are so far off Bell’s and Reddick’s, even though their win columns are similar to Custer’s. Custer failed to win in 2021 yet had almost the same year as he did the year before. He gained two top 10s, the last one coming at Dover Motor Speedway on May 16, and finished a dismal 26th in points. SHR struggled last year, that’s no secret, but Harvick and Aric Almirola still both made the playoffs, finishing fifth and 15th, respectively; Custer was definitely a victim of the sophomore slump.

But as Cup nears the halfway point of the 2022 season, Custer seems to have regressed even more. He hasn’t finished in the top 10 this season – meaning his last top-10 finish was over a year ago at Dover Motor Speedway. He only has three top-15 finishes this season and recently just finished a mediocre 21st at Sonoma Raceway, the worst-finishing SHR car.

Each SHR driver has shown a flash of brilliance at least once this season, except Custer (save for a pole win at the Bristol Motor Speedway dirt track, only to have to pit before the end of the first stage to clean mud off his car, after which he could never recover). The 24-year-old is poised for another points finish outside of the top 25, as he currently rides 27th in points.

Custer’s dad, Joe, is the president of SHR. While Custer doesn’t generally bring any funding himself, his father’s position at the team might keep him in the car long term. But if SHR is trying to right the ship, they might have no other option but to kick Custer to the curb.

That said, with Almirola retiring (and Harvick’s status unknown), letting go of Custer would just leave Briscoe as a sure bet for the future of the team. Which gives Custer yet another chance to try to prove himself again.

Chances are, given Custer’s dad’s position with the team, he’ll be there for the time being — and maybe that’s fine, if he can figure out how to adapt to Cup racing sometime soon. Otherwise, the team may need to take a long, hard look at who was once considered its future.

Never underestimate the Daddy, & Granddaddy, factor in NASCAR.
You could replace Custer’s name with Ty Dillon, & this article would still read about the same.

Could say that about half the drivers in the field.

And the driver they dumped for him is a contender every week.

Yes. Every member of the Xfinity Series Big 3 from a few years ago has outperformed him in nearly every season. Reddick got screwed from getting ROTY because Custer won and got in, while Reddick barely missed but ran up front much more often. Since Kentucky in 2020 the dude has been an afterthought. 23XI and Trackhouse both outran him with young, then unproven drivers in YEAR 1! Michael Mcdowell (who is a solid driver and a great guy but nowhere near the top of the totem pole) has 3x as many top 10’s this year as Custer has had since the start of the 2021 season-in a Front Row car.

HOWEVAH, if Custer leaves, and Almirola leaves, SHR is in a pickle. They have Preece as their development driver, but the problem is he can’t fill 2 rides at once Ford’s Truck and Busch pipelines aren’t near as deep as Toyota or Chevy. Zane Smith is probably their most talented youngin’, Riley Herbst, while improving and showing consistency this year IS NOT Cup ready, Hailie Deegan is teetering on the edge of being a bust, and…. that’s it. Ryan Sieg and Tanner Gray are likely Xfinity and Truck lifers. Zane Smith is semi-realistically their best option to replace Custer with Preece likely replacing Almirola. Problem with him is that even though he’s tied to Ford, I feel like he’s more loyal to FRM, and is likely in line for either Mcdowell’s seat when he hangs it up, or T. Gilliland’s spot in the #38. Custer likely stays for another year, maybe 2, and will likely once more flounder around in 25th every week while his teammates make the Playoffs.

Maybe a management role and learn the business end. He does not have it but has the personality for marketing or sales. He also knows now how the race car works. Makes him more an asset.

Since the whole Stewart Haas stable has struggled, how is this to be expected?