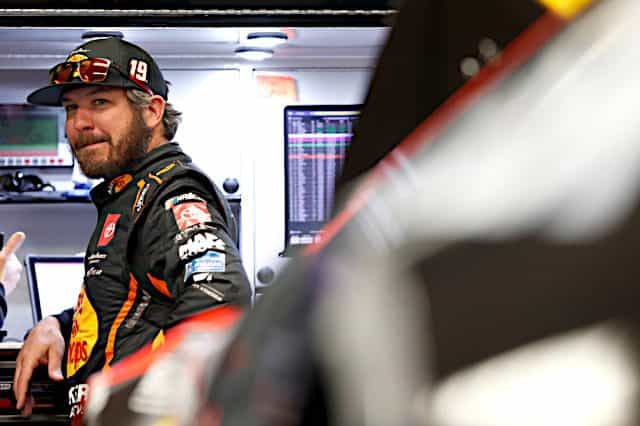 Do you feel that? That is the momentum building for the 2023 edition of NASCAR silly season.

Silly season unofficially kicked off a little over a month ago when Kyle Busch stirred the pot (not the media, but Busch himself) with comments about how his contract renewal with Joe Gibbs Racing wasn’t done yet. And now we wait for the first actual domino to fall, and that’ll mark the official start of silly season.

I wrote in April that Busch and Stewart-Haas Racing’s No. 10 car (Aric Almirola is stepping away from full-time competition) would be the first dominoes to fall that would give way for all the other pieces to start falling into place.

In a way, it seems like the Busch situation has sort of been resolved. It always seemed like a stretch that he would even leave JGR. And recent comments from Joe Gibbs and Toyota make it seem they are deeply committed to bringing Busch back and that JGR is close to landing sponsorship for the No. 18. After all, if Busch left, they would not only lose the most decorated active NASCAR Cup Series driver, but they would also lose a key piece in their driver development program in Kyle Busch Motorsports.

Of course, until pen actually hits paper, there’s always the possibility things could fall apart, but Busch no longer seems like the biggest silly season piece. It has since become his JGR teammate Martin Truex Jr.

Truex still doesn’t know if he wants to race next year or not.

“I think about it every day,” Truex said. “We’re working on it. I should know something soon. I’m taking it all into account — my whole life, all of racing, everything.

” … It’s a big decision and a lot of factors. I would say within a couple of weeks, you guys will know what I’m doing.”

I’ve always viewed Truex as the Ricky Rudd type, where he retires without any sort of farewell tour and then is just gone — you never see him again. He has nothing to prove and is in a rare situation where he will get to go out on his own terms.

Though Truex hasn’t won this year, he’s still tracking to make the playoffs. And No. 19 sponsors Bass Pro Shops and Auto Owners Insurance are his sponsors — they came over with him from Furniture Row Racing, and Bass Pro has been with Truex for majority of his career.

That means if you’re JGR, you want Truex to come back. His retirement not only means it loses a future NASCAR Hall of Famer, but it also might mean the team has to find sponsorship for two Cup cars.

But if Truex does retire, then the logical choice to replace him is Ty Gibbs, right?

Probably, but I’m not as sold on that after Joe Gibbs’ comments on his grandson.

“We want to be real careful, take our time, and so really our goal was to keep him in Xfinity for two years, and so this is his first year really,” Gibbs said. “I think he’s had 23 or 24 Xfinity races, so the game plan is two years for sure in Xfinity. Make sure we don’t rush him.”

So if the team feels like moving Ty Gibbs up next year is rushing him, then maybe they go with someone like John Hunter Nemechek instead. Nemechek is too good of a prospect still to return to KBM for a third season, so I absolutely expect him to move up to either Cup or Xfinity.

As for SHR’s No. 10, it still will be one of the most coveted rides this silly season and it still hinges on what Smithfield decides to do. If Smithfield comes back, Ryan Preece seems like the guy, as he is currently SHR’s reserve driver and is also represented by KHI Management.

If Smithfield doesn’t return, then the situation could get really interesting and will depend greatly on if Gene Haas wants to foot the bill for two cars or not. I mentioned last month that SHR could turn to drivers with sponsor backing like Harrison Burton, Riley Herbst (who drives the team’s Xfinity entry) and Ricky Stenhouse Jr., all of whom are represented by KHI.

Stenhouse is apparently in talks with with JTG Daugherty Racing to return for 2023. Plus it’s hard to see him leaving after their recent string of success, scoring a career-high four-straight top 10s.

Burton and Herbst haven’t done enough this year to deserve a ride as good as the No. 10, but Cole Custer also hasn’t done enough to warrant keeping SHR’s No. 41 ride. When it comes to NASCAR rides, to quote Clint Eastwood in Unforgiven, “Deserve’s got nothing to do with it.”

Custer is currently 27th in points while his three teammates are in the top 14. SHR President Joe Custer’s son or not, you have to wonder how much longer the team will give him. But with the need for a driver in the No. 10 next year and a driver for the No. 4 in the coming years, it could keep Custer’s seat safe for a few more years.

Another name to keep an eye on for that No. 10 seat as well as other seats this silly season is Zane Smith. He’s been on fire in the NASCAR Camping World Truck Series this year, winning three times so far, and he made his Cup debut this past week with RFK Racing in the place of COVID-19-sidelined Chris Buescher.

Smith is far and away the best prospect Ford has in Xfinity and Trucks, and he nearly made the jump to Cup this year before Chip Ganassi Racing was sold to Trackhouse Racing Team. He joined Front Row Motorsports in the offseason, and he told Frontstretch, “I’m signed over there for a while to where they have rights to me at least.”

So it sounds like Smith is signed with FRM past this year, and running a fourth year of Trucks really wouldn’t do much for him. But it’s hard to imagine FRM letting go of either Michael McDowell and Todd Gilliland. But maybe it happens if Ford makes the call, or maybe the team leases him out to another Ford team like SHR or RFK, if for some crazy reason Buescher doesn’t return/isn’t brought back. I just can’t see Buescher and RFK splitting after one year where the equipment is clearly the problem, though.

23XI Racing can pretty much be ruled out from any silly season plays, as Denny Hamlin recently said it wasn’t investing any more into the team until the business model changes.

But Trackhouse, on the other hand, will have a third car running races this year, with Kimi Raikkonen and potentially more international drivers racing its No. 91 entry. It’ll be interesting to see if that car becomes full time next year and if the team can acquire a charter for it.

If the No. 91 does go full time, I wonder if it will go with one international driver new to NASCAR or if it will sign a free agent or prospect. But one name who linked himself to Trackhouse this week was Carson Hocevar, as apparently he and Niece Motorsports have an alliance with Justin Marks’ and Pitbull’s team (makes sense, as Ross Chastain ran races for both this year).

Could Trackhouse be grooming Hocevar for a seat in one of its Cup rides? I can’t see him making that jump next year, but he certainly has the talent to make it at that level and is one of Chevrolet’s best prospects. With Hendrick Motorsports all filled up for the foreseeable future, the top Chevy prospects will probably be directed to Trackhouse and maybe Petty GMS Motorsports and Kaulig Racing.

Speaking of Petty GMS, Erik Jones and the No. 43 have been shockingly impressive this year, but Ty Dillon and the No. 42 squad have not. Nothing is signed, but you have to think Jones will be back in that car next year. But I wonder if Dillon gets another year or not. Jones is currently 11 spots higher in the standings and really should be higher than that if not for horrible luck.

There are a lot of good drivers in Chevy’s pipeline, including Noah Gragson, Austin Hill, Sheldon Creed and Sam Mayer, and Trackhouse can only expand so much. If Dillon doesn’t step it up, eventually the team might feel pressure from Chevy to move on from him to give one of those prospects a chance. Gragson might get Kaulig’s No. 16, but Daniel Hemric is a contender for that as well.

With a few changes here and there, I don’t expect this year’s silly season to be as crazy as the past few. But now we wait these “couple of weeks” for Truex to make his decision. Should we call it #TruexWatch?

There are some really talented drivers in the pipeline. And judging from what I see from youngsters coming up in the Midget ranks. A good crop of prospects to take the places of those who move up.

It’s a shame that raw talent isn’t usually enough for someone to start climbing the ladder given today’s realities.

It seems likely that Bass Pro & Truex will be back at JGR next year. Meanwhile, Kyle Busch is trying out his provisional Cup sponsor, Yahoo! on his #54 truck soon, so that deal should be done shortly.

As for the #10 at SHR, as the article mentioned, everything hinges on if Smithfield returns for 2023, or not. If it is a “not”, then SHR will probably have to go shopping for a driver who can bring along his/her own sponsors.

Harrison Burton is a waste of a good race car. Money doesn’t lead to success.

He is sponsorship gold for them but no talent at all.

What is Martin gonna do for next year though

I’m not convinced that Hamlin won’t be the one to leave JGR. I can easily see Gibbs in the 11, Hamlin in the #45, and Kurt Busch in the booth. And Nemechek replacing Truex if he retires.

Hamlin and fex ex signed multi year contracts last year. Look it up, Hamlin is getting a huge salary for this day and age. So he can’t leave Gibbs for a few years and why in the world would he race for his own team and make less money. Bubba stays in the car till he asks for more money and then MJ turns him loose.