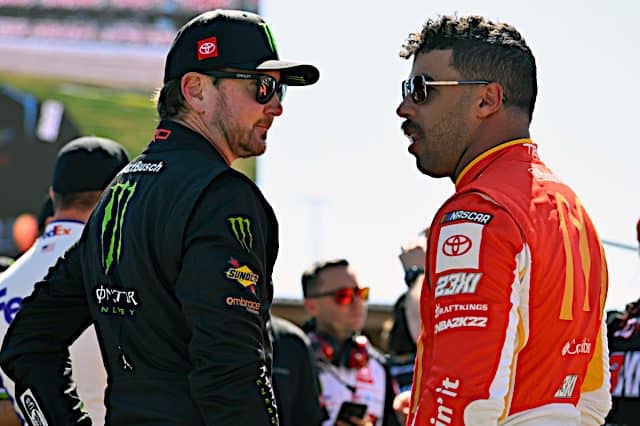 The common theme became all the more common late Sunday night when Bubba Wallace had another strong run foiled due to a pit road mishap. It’s hard to blame Wallace for being visibly frustrated with his team over the radio — we’ve seen other drivers have some family-unfriendly diatribes in recent years, too.

But the 23 team has a bigger problem than appearing to need a sports psychologist. It’s that only one 23X1 Racing driver, Kurt Busch, would be locked into the playoffs if they were to begin today.

Basically, Wallace needs to win a race between now and Daytona. Sure, the late August race on the famed high banks and Atlanta stand to be Wallace’s best chances due to his past success on superspeedways, but the fact that Wallace was a top-10 car at Kansas and had a top-10 caliber car at Nashville, that was quickest in practice and salvaged a 12th-place showing, also point to a shot to contend at intermediate or similar tracks.

But there’s one thing that can push a contending car to a winning car: a superior pit crew.

Obviously, the 23 pit crew is misfiring. Since the No. 45 is in the Playoffs, what’s the harm in swapping crews? If it works, great. If not, just swap back for the postseason.

2. What’s the long-term plan in Nashville?

Just before the stroke of midnight on the east coast on Sunday when the checkered flag fell, the second year of NASCAR ‘s top series in suburban Nashville concluded.

But how long should this take place?

NSS had a lot of expected first-race buzz last year. But similar to another southeastern track in recent years, located one state to the north, traffic became an unwitting storyline to that first race. The question now becomes what next in Nashville, a place that NASCAR appears to badly want to be.

This race had its exciting moments, most notably with the Joe Gibbs Racing cars duking it out, but otherwise it was short on must-see highlights.

In a sport where the argument over whether one track should have two races has gained traction in recent years, the question that begs asking is that should the stars align to clear the way for racing at the Nashville Fairgrounds, what purpose does “the other track” have in that future?

Fans today want short tracks. It’d be hard to expect them to prefer an intermediate venue over a throwback venue like the Fairgrounds.

I’d love it if racing were back at the Fairgrounds. But if that does include the top level in NASCAR, it’s hard not to think of NSS as a placeholder until the next big thing comes along for Speedway Motorsports.

There’s no other way to say it. Justin Allgaier took the field behind the woodshed on Saturday to win at Nashville in the NASCAR Xfinity Series. It was his 18th career Xfinity win, and since 2017, he has at least one win per season, winning more than once every year but one.

With that success, the question is begged: Will Allgaier at some point get another shot at the NASCAR Cup Series? At some point, he should. Especially if at some point JR Motorsports goes Cup racing.

But Allgaier would have reason not to do so. That’s due to the fact that a Cup career should not define a driver.

Think about guys like Jack Ingram, Tommy Houston and Randy LaJoie. They’re Hall of Famers, or should be one day, and they have that legacy without NASCAR’s top division.

Dale Earnhardt Jr. may be a Hall of Famer due to his Daytona 500 wins. But his case is definitely strengthened by his two titles in what was then the NASCAR Busch Series.

Allgaier could very well make a career for himself as an Xfinity Series lifer, and there’s nothing wrong with that.

4. Was Elliott vs. JGR a title-chase preview?

If you watched a bulk of Sunday night’s action off and on and woke up when the race ended, and perhaps more abruptly if you live near the Dawsonville, Ga. “sireen,” you probably got a surprise when you learned that it was not Martin Truex Jr., Kyle Busch or Denny Hamlin that got the win.

Rather, it was Chase Elliott who ended up spoiling the JGR party like the time on Parks & Rec when Chris brought a veggie loaf to the party instead of cake.

Between Hamlin, Truex and Busch, the three led a combined 250 of 300 laps. That’s a nice stat and all, but without a trophy, it’ll get a you a cup of coffee at the corner store, and that’s about it.

It really had the feel of times where it’s been JGR against one outlier such as Kevin Harvick or Joey Logano.

What Sunday night showed us is that on the larger tracks, the cream is rising to the crop, and that means that JGR’s three top cars will be major factors. To win, you’ll have to beat at least one of them, if not more. Elliott and the No. 9 team proved they are capable to doing so, and that confidence could be golden in the postseason.

5. Has Front Row Motorsports pulled even with Stewart-Haas?

As things stand now, one Stewart-Haas Racing driver, Chase Briscoe, is locked into the Playoffs. Harvick and Aric Almirola are fighting for the final playoff spot. Of course, both can shed the pressure of needing to get in in points with a win.

Harvick and a driver from another Ford team had one common thread at Nashville. That driver, however is not at SHR. Rather, it was Michael McDowell from Front Row Motorsports. Both spent a good part of the night in the top 10 before late shuffling dropped Harvick to 10th and McDowell, currently 21st in points, to 13th.

Given his superspeedway finishes include a Daytona 500 win, it’s easy to dismiss McDowell as a speedway specialist, but that’s just not the case as of late. Consider this: Heading into Nashville, he had three top 10s and one top-five finish in five races, and those top showings came at a variety of tracks ( Darlington, Charlotte and Sonoma).

That’s not too far behind Harvick, who has three top fives in that same span with Almirola’s top-five at Gateway being his only top ten in that stretch.

There’s no arguing that McDowell and Front Row Motorsports have taken a step forward this year to challenge an organization that a few years ago had one of the top cars to beat each weekend.

That speaks well of FRM, but also highlights the need for SHR to find that proverbial shot in the arm.

Regardless, as the schedule rotates into a variety of track layouts prior to the postseason, it’s safe to say that McDowell is a dark horse.

I would love to see Allgaier get another bite of the Cup apple. His recent Success in Xfinity isn’t a new thing, it’s been going on for years.

So many times when drivers come into Cup, for the proverbial “cup of coffee.”
They get labeled as not Cup material, when in actuality they got their look, in cars that weren’t really Cup material.

If Jr was to move up, it would require patients with whoever they put in the cars. Adjusting to that move doesn’t come overnight.

That’s what I find so amazing about Trackhouse. People seem to attribute their success to the Ganassi purchase, & there’s no doubt that that helped. But look at Ganassi’s history. When’s the last time both cars won, in a season? The second win by Chastain is just icing on the cake.
Marks & the entire Org. deserves more credit than they’re receiving.

By placing the blame on the 23 pit crew, you are implying that the drivers themselves are equal and the pit crew is the only thing holding the 23 back. Do you really believe that?

Bubba salvaged a 12th place finish. He went from 23rd where he was running before the last caution, to 12th because his crew chief told him to stay out. Bubba didn’t salvage anything, his crew chief gained him 11 spots.

There was another driver recently who tried changing crew configurations to try to get better results. The similarities between Bubba and Danica continue.

Nascar wants a bubba victory, bet on it. Also bet if given the opportunity, Denny would push that 23 car to a win instead of trying to pass him. What would nascar do if it was obvious and it happens. Easy answer huh, nothing.

Yep, after watching flub a dub do his media tour after the garage door rope thing, and remembering what he told seasoned fans to do, and observing the general mess na$car has made with their woke agenda I haven’t and never will again spend one red cent with them. I’ve been really enjoying late model/ local and regional series racing- spending money on real racing. I do enjoy checking in here on the s#it show for kicks.