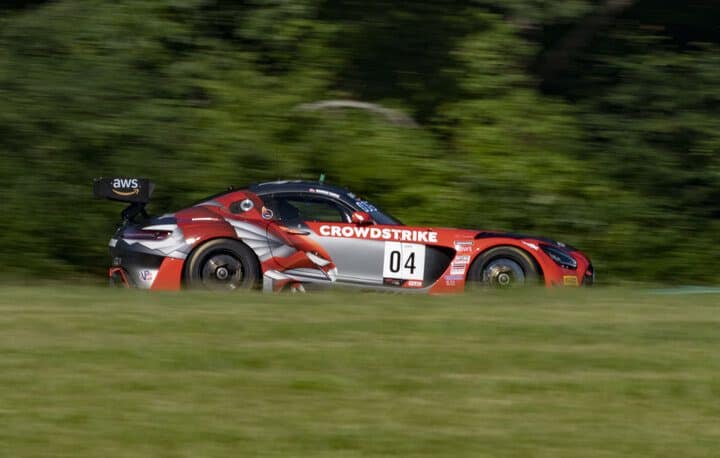 “With [VIR] and the Mercedes, we’ve had prior success here,” Kurtz said after the race to SRO America’s Amanda Busick.  “[The car] just felt really good.  The Riley-Crowdstrike guys gave me a great car and I just love this track.”

Kurtz started from the pole, but in an unusual circumstance, was all alone on the front row.  Zelus Motorsport’s Jason Harward was supposed to start second, but he was forced to start in the pits due to an illegal tire change.  As a result, Kurtz had a stress-free start in his Mercedes-AMG GT3 Evo.  Jeff Burton was able to move up to second in his Lamborghini.

Kurtz pulled out a small lead until the race’s sole safety car period due to Matt Ibrahim spinning his Ginetta G56 GT4 in turn 1, then stalling.  He was unable to get the car going, so the yellow was required to get him off of the racing surface..

Once the green came back out, Kurtz was able to once again pull out a lead on Burton.  Meanwhile, Harward was the man on the move.  After starting in the pits, he was 25th overall on the first lap.  He had to slowly make his way through the various GT4 cars to have any real chance of a decent finish.  He was able to do this early on, then got the full course caution.

The caution allowed Harward to close up to the back of the GT3 cars.  When the race restarted, Harward was able to continue his forward progress, getting past Mirco Schultis and Justin Wetherill with ease.  He eventually got up to fourth before sliding off-course at the Oak Tree Turn while trying to run down the Ferrari 458 GT3 driven by Andy Pilgrim.  Harward was able to keep his Lamborghini out of the tires, but lost significant distance.

Luckily, Harward’s pace was such that he was able to run Pilgrim back down and pass the Ferrari with two minutes to go in GT4 traffic to take third.  Meanwhile, Kurtz was able to easily claim the win.

Kurtz’s margin of victory was 9.74 seconds over Burton.  Harward ended up third, followed by Pilgrim in the debut for SKI Autosports.  If you’re wondering, according to the broadcast, SKI apparently stands for “Spending the Kids’ Inheritance.”  Points leader Jason Daskalos was fifth.

In GT4, Moisey Uretsky won the class pole in his Aston Martin Vantage GT4 and drove very well early on.  However, the full course caution brought the field back to him.  Right after the restart, Premier Racing’s Adam Adelson was able to get alongside Uretsky entering turn 1.  Adelson, making good use of his Porsche Cayman GT4 RS CS, cleared Uretsky to take the lead.

Once in front, Adelson was able to pull away while Uretsky fought to hold onto second.  Ross Chouest attempted to get second from Uretsky, but went too fast into turn 1.  As a result, Uretsky kept second while Chouest slid wide into the grass.  He would drop back to ninth in class, but eventually finished seventh.

Adelson was able to pull away from the rest of the pack to take the GT4 victory in ninth overall.  It is Adelson’s first career win in GT America, but he is coming off of a Pro-Am victory at NOLA Motorsports Park with teammate Elliott Skeer last month.

In addition to winning and leading the most laps, Kurtz set a lap during the race at 110.688 mph.  That lap was good enough to earn Kurtz the pole for Race No. 2.  That race is scheduled to go green at 8:45 a.m. ET Sunday morning.  It will be streamed live on the GT World YouTube channel.