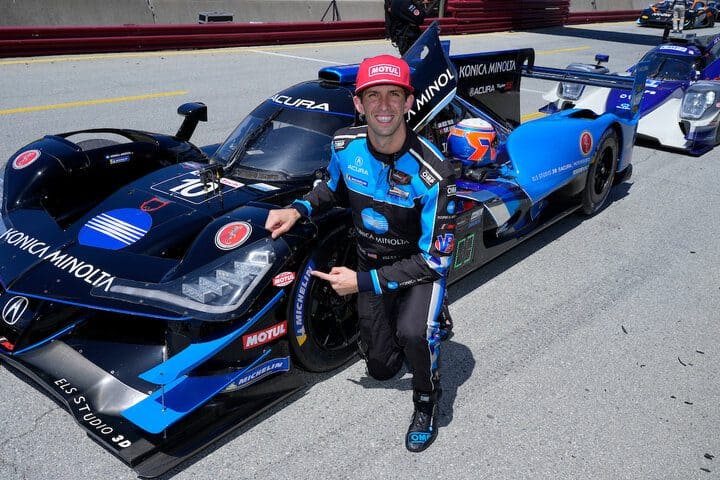 Wayne Taylor Racing’s Ricky Taylor continued his hold on the speed charts Saturday (April 30) by winning the pole for the Hyundai Monterey Sports Car Championship with a lap at 108.988 mph.  The lap is a new IMSA track record for the 2.238-mile road course.  Despite that, Taylor thought that more was on the table.

“I thought [a one minute 13.8 second lap] was possible,” Taylor said after the session.  “In qualifying you always extract that little bit more.  Our Acura has been so good all weekend.  We lead every session, but we’ve felt so much pressure with how much it’s kind of closed up throughout the weekend.  Everybody
keeps gaining ground so we’ve had to keep on our toes a little bit.”

The session ended up being a battle between Taylor and Meyer Shank Racing with Curb-Agajanian’s Oliver Jarvis.  Jarvis struck first with a quick time with Taylor just behind.  A lap later, Taylor dropped the track record time just before the halfway point of the 15-minute session.  Jarvis tried his best to top it and came close, but could not do it.

Taylor ended up nine-hundredths of a second ahead of Jarvis.  Chip Ganassi Racing controls the second row with Alex Lynn starting in front of Sebastien Bourdais.  JDC-Miller MotorSports’ Tristan Vautier rounds out the top five.

In LMP2, PR1 Mathaisen Motorsports’ Steven Thomas claimed the class pole with a lap at 103.864 mph, good for seventh overall.  The lap was was a mere five-hundredths of a second faster than teammate Patrick Kelly, who is making his first IMSA start since 2020.  DragonSpeed’s Henrik Hedman will start third, then High Class Racing’s Dennis Andersen and Tower Motorsport’s John Farano.

In GTD Pro, The Heart of Racing’s Alex Riberas set the first quick lap of the session seven minutes in that gave the rest of the class something to shoot at.  The first main challenger was WeatherTech Racing’s Daniel Juncadella, who put his Mercedes on top.  However, with less than three minutes to go, PFAFF Motorsports’ Mathieu Jaminet turned in a lap at 96.904 mph, a new track record for GTD cars.  This held up to give Jaminet the pole.

Jaminet was only two-hundredths of a second faster than Juncadella.  Riberas was another two-tenths of a second back in third.  BMW M Team RLL’s John Edwards will start fourth in class, followed by Vasser Sullivan’s Jack Hawksworth.

The GTD class saw CarBahn Motorsports with Peregrine Racing’s Robert Megennis put his Lamborghini up top early.  Roman DeAngelis and Robby Foley took their turn at the front of the pack, but HTP Winward Motorsport’s Russell Ward set a lap at 96.411 mph on his final lap on track to win the class pole.

Ward’s lap, which was fourth overall of all GT runners, was two-tenths of a second quicker than the Lamborghini of NTe Sport’s Jaden Conwright, who set his time after the checkered flag had flown.  Foley will start third, then DeAngelis and Megennis.

The session was not completely clean.  Bourdais had two separate off-course excursions, one in turn 11 and one in the Andretti Hairpin.  Alegra Motorsport’s Michael de Quesada locked up entering the Corkscrew and put his Mercedes out in the dirt.  He did not hit anything and continued on.  He will start 10th in GTD.