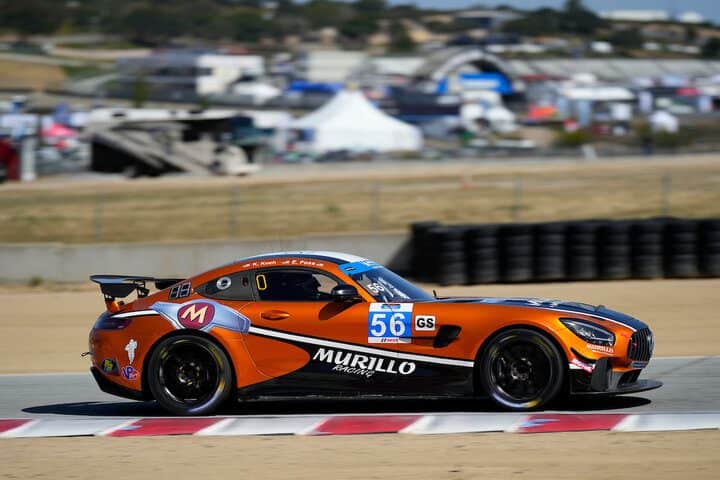 Murillo Racing’s speed stranglehold on the IMSA Michelin Pilot Challenge field continued in qualifying Saturday (April 30) as Kenton Koch won the pole for the WeatherTech Raceway Laguna Seca 120 with a lap at 89.592 mph.  It is Koch’s first career Pilot Challenge pole in what amounts to a sub role.  Koch is driving this weekend in place of Jeff Mosing, who was unavailable.

Koch’s lap, which was the only one under 90 seconds for the entire weekend for the series, was four-tenths of a second faster than the Porsche of Rennsport One’s Alexandre Premat.  TeamTGM’s Hugh Plumb will start third, followed by Kenny Murillo, who topped Practice No. 2 on Friday.  NOLAsport’s Matt Travis qualified fifth, but then lost all of his times due to getting out of his car prior to impound.  As a result, he will start from the rear of the field.

In TCR, JDC-Miller MotorSports’ Chris Miller took his Audi RS3 LMS to the top of the charts early on, hoping to replicate his teammate Mikey Taylor‘s form from practice Friday.  However, Bryan Herta Autosport’s Harry Gottsacker overtook Miller with a lap at 86.862 mph halfway through the 15-minute session.

From that point, that was the lap to shoot for as Gottsacker pulled onto pit road early.  In the final minutes, no one could get reasonably close to that time, giving Gottsacker his first pole of the year.

Gottsacker’s lap ended up being more than four-tenths of a second faster than Miller, who set a time nearly identical to the best practice lap from Friday.  KMW Motorsports with TMR Engineering’s Roy Block will start his Alfa Romeo in third, then Rory van der Steur in his Hyundai.  AJ Muss will start fifth.

40 of the 41 teams set times during qualifying.  The sole nominated driver that failed to set a time was Bryan Herta Autosport’s Robert Wickens in the No. 33 Hyundai Elantra N TCR.  Wickens did venture onto the 2.238-mile course, completed his out lap and started his first lap at speed before mechanical issues forced him to pull in.  Wickens will start the race from the rear of the field.

The WeatherTech Raceway Laguna Seca 120 is scheduled to go green at 7 p.m. ET Saturday.  The race will be streamed live on Peacock starting at 6:55 p.m. ET.