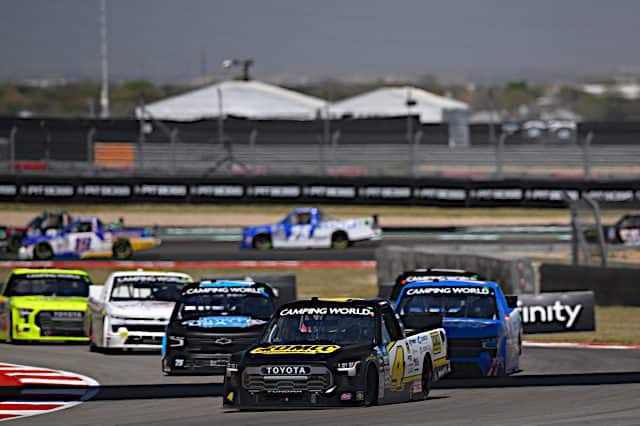 AUSTIN, TX — Despite an abundance of cautions, it was a relatively tame battle for the lead in the first 44 laps of the NASCAR Camping World Truck Series race at Circuit of the Americas.

Zane Smith won both stages by staying on the track while other cars pitted, but Kyle Busch was the dominant car of the day; he led 31 of the first 44 laps, and no one was able to come close to him until the overtime restarts.

Then with two laps to go, all hell broke loose.

Busch got an early jump on the restart, and he established a comfortable lead when the field headed into the esses. The battle was then on for second between Stewart Friesen and Alex Bowman, with Smith lurking closely behind the lead trio.

Heading into turn 11, Bowman had a run on the inside of Friesen. Friesen tried to block Bowman, but this move instead sent the two of them deep into the turn, which they both ultimately overdrove.

Busch, who had taken turn 11 wide, was run off the track by Bowman and Friesen and lost the lead.

Through the calamity, Smith passed all three leaders to take the lead into turn 1, with John Hunter Nemechek following right behind him in second.

Although the leaders remained close behind the lead duo, Smith drove smoothly through the corners and ultimately gapped second-place Nemechek by more than three seconds when he crossed the finish line to win his fifth career Truck race, his second of the season, and his first on a road course.

“We scored some massive points today, so that was huge,” Smith said. “Once we got back up there in the final stage and then got wrecked, it kind of became a ‘man, let’s see if we can get in the top 10.’ Before I knew it, I was seventh.”

“We got our truck closer, and we still needed some more, but obviously it was the [No.] 52 (Friesen) who was locked up, and it seems like Kyle was locking up into [turn] 11, and I knew I was going to be in a good spot and went underneath the [No.] 51 (Busch), Bowman, and the [No.] 52. I looked in my mirror, and unfortunately, I had seen that they weren’t too far back and knew that I was probably going to get a divebomb.

“Made sure just to get everything I could out of my breaking zones and felt like once I kept them behind right there, I was able to stretch it some and that was obviously the key; it was smooth sailing from there.”

Smith has been involved in a fair share of crazy finishes in the Truck Series, including a race at Martinsville Speedway last fall where he won after Friesen and Todd Gilliland wrecked heading into turn 1 on the final lap.

“I’ve been a lot crazier positions, this one is up there,” Smith said. “But not winning a race all year, nothing going right all year last year and being a must-win at Martinsville and thinking I lost it and then getting transferred into the Championship 4 was probably the craziest out of those.

For Nemechek, his second-place finish today was his first finish better than 24th in the 2022 Truck Series season. Given the struggles that he’s faced in the first three races, Nemechek was understandably relieved to have finally made it to the checkered flag in one piece.

“It feels good to finally be able to finish one,” Nemechek said. “It’s been a struggle this year, finishing 24th, 25th, 24th definitely sucks; we got a lot of work still to do, but to be able to come home second after the day we had from going to the back at the start of the race, getting turned by the [No.] 38 (Smith), having an uncontrolled tire and going to the back again, and driving up through there just shows that we had a fast, strong Romco Toyota Tundra TRD Pro. Hopefully we can take the momentum and roll on with it.”

Busch finished third after leading more than two-thirds of the event. In regard to the contact that sent him off track in turn 11, Busch had a rather blunt response:

After the race’s conclusion, Bowman went down to Busch’s truck to talk things over. However, Busch declined to elaborate on what the conversation was about.

Bowman was the big loser in the battle for the lead; while Friesen managed to hang on to a ninth-place finish, Bowman finished 25th after additional contact and tire problems in overtime.

“Yeah, the [No.] 52 (Friesen) was just trying to block really late into the corner deep, and he just cut across my nose late,” Bowman said. “As soon as I put any wheel in it, it just started wheel hopping. Neither me nor the [No.] 52 made the corner. It was a bummer; I hate that we got Kyle (Busch) there because he was an innocent bystander and had the race pretty well won at that point.”

Bowman and Busch have had beef in the 2022 season, as the two got involved in a friendly t-shirt war after Busch had some choice words for Bowman’s Cup Series victory at Las Vegas Motor Speedway. Despite that, Bowman assured that there was no love lost between the two of them.

“It cost him the race, so he’s going to be mad,” Bowman said. “But like, we have raced each other long enough and know each other well enough that I feel like he absolutely knows that I didn’t overdrive the corner to try and crash him.”