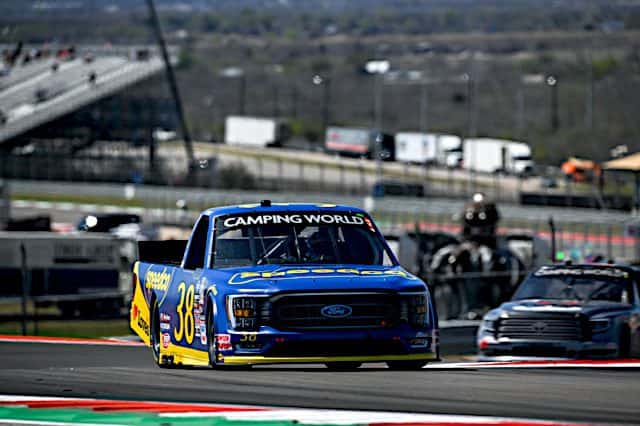 It took two overtimes and a wild finish in the second overtime, but Zane Smith hit for the cycle, sweeping all three stages en route to the victory in the XPEL 225 Saturday (March 26) at Circuit of the Americas for the NASCAR Camping World Truck Series. For Smith, it’s his fifth career win and second of the 2022 season. For Front Row Motorsports, it marked back-to-back wins for the organization after they won the inaugural race at COTA last season with Todd Gilliland.

“Truck races are crazy. You’re never out of it ’til you’re out of it. Huge statement by this team,” Smith said after the win. “It was a wild one, but never over ’til it’s over.”

Zane Smith restarted in the third row on the final restart and quickly moved up to fourth. Heading into turn 11, Alex Bowman made a move to the inside of Stewart Friesen for second. Defending his spot, Friesen went long into the turn and ended up alongside race leader Kyle Busch.  The three drivers ended up colliding. Zane Smith took the normal line and swept into the lead. From there, he pulled from the pack.

“Once I got back up there, I was figuring out [how] we’re racing,” said Smith of the incident that would send him to victory. “The No. 52 (Friesen) kept try to dive-bomb the No. 51 (Busch). The No. 51 was expecting it during the final restarts. Those two were in their own boat. It got rid of the two of them and the seas parted in the corner.”

Zane Smith ended up 3.529 seconds ahead of John Hunter Nemechek at the finish. Busch was third, then Ben Rhodes and Chandler Smith. Christian Eckes was sixth, then Tyler Ankrum, Carson Hocevar, Friesen and Grant Enfinger. Bowman ended up cutting his right-front tire on the final lap after the aforementioned contact and finished 25th.

Next up for the Trucks is a date with the paperclip at Martinsville on Thursday night, April 7. FOX Sports 1 will have coverage of the United Rentals 200 starting at 8 p.m. ET.