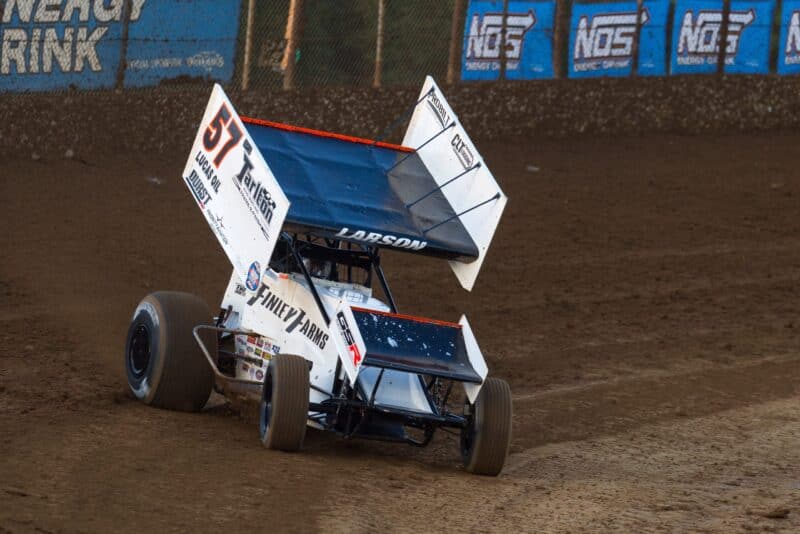 Kyle Larson and Giovanni Scelzi engineered a home-state sweep in the World of Outlaws’ first Western Swing to the Tulare Thunderbowl since 2019.

A series of last-minute deals, be it sponsor Finley Farms’ private airplane or Paul Silva and associates rolling out a second sprint car, allowed Cup Series regular Kyle Larson to score his first dirt win of 2022 Saturday night at the Tulare Thunderbowl, blasting by Dominic Scelzi with 17 laps to go to score his first victory at the track he calls his favorite since 2013.

Saturday’s feature proved a choppy affair, interrupted by numerous yellow flags including three separate incidents involving James McFadden. Polesitter Spencer Bayston rebounded after spinning from the lead in Friday’s feature and led the first eight laps before being bested by the elder Scelzi on the high side.

Friday’s feature on the other hand proved a thrilling green-flag affair, with “hot sauce” Giovanni Scelzi leading the last 29 laps on paper, but having to stifle legitimate challenges from Larson, Rico Abreu and David Gravel to hold onto said lead.

. @dirtvision REPLAY: @GioScelzi is able to hold off @DavidGravel and @KyleLarsonRacin to win a thrilling feature in his home state of California @TulareRaceway pic.twitter.com/LP2f5F462G

California drivers were vigorous in defending their home turf this weekend at the Tulare Thunderbowl, winning both features and securing seven of the 10 top-five finishing positions across Friday and Saturday night.

Speaking of those California drivers, defending series champion Brad Sweet continued his surprising winless streak at the Tulare Thunderbowl, but it wasn’t for lack of speed on the track. Scoring top-five finishes both nights, Sweet won fast time Saturday despite going out late in qualifying, well after the track had slicked off, and made substantial forward progress in the dash despite starting last.

“I’m the first human,” he joked after following brother-in-law @KyleLarsonRacin to the line.

The Grass Valley, CA native has four more races to win in his home state with the @KKRDirt, @NAPARacing #49. pic.twitter.com/nDgX9krYnA

Current series points leader David Gravel maintained his lead with top-five finishes, maintaining an average finish of 3.43 a month into the 2022 campaign.

The weekend’s hard chargers lived up to the name Friday and Saturday nights, with James McFadden going 21st to seventh Friday night and Sheldon Haudenschild going 21st to 10th Saturday.

Despite that accolade Friday, McFadden and Roth Motorsports endured about as rough a Saturday as they could. McFadden spun twice and was involved in three caution-flag incidents in Saturday’s feature, only able to start that feature after an engine change. Meanwhile, teammate Kerry Madsen was forced to scratch from Saturday’s feature entirely with mechanical woes.

Unfortunately prior to the A, we noticed a cooling issue with @kmr29’s engine and forced us to scratch from the feature event.

Penngrove, Calif.’s Chase Johnson finished fifth in the Last Chance Showdown races Friday and Saturday at Tulare. Translation, he was the first driver to miss transferring into both features.

Clovis, Calif.’s Corey Day went for a tumble on the first lap of Saturday’s second heat through no fault of his own, collected in an initial-start melee triggered by contact between Tyler Courtney and Kraig Kinser.

Also collected in that incident was Donny Schatz, who saw his entire Saturday night at Tulare unravel because of said incident. Schatz had to race his way in through the LCS after collecting damage in the second heat incident, then ended up flipping 12 laps into the feature while trying to battle through lapped traffic.

Former Cup Series regular Kasey Kahne has had his inaugural full-time campaign on the WoO tour derailed in a major way, with DirtVision’s broadcast reporting Friday night that Kahne would not be racing again until the series tackled the Devil’s Bowl Speedway in early April, as he continues to recover from lingering injury issues following a savage crash at Volusia last month.

Defending Cup Series champion Kyle Larson finished on the podium during both nights of competition at Tulare, including his 25th career series win Saturday night.

Racers race, and that’s all @KyleLarsonRacin does.

He’s off to @PhoenixRaceway right now to chase a @NASCAR win tomorrow following his #WoOSprint victory at @TulareRaceway tonight.

Thanks for coming to play, KL. 👊 pic.twitter.com/redrq9R6Eh

California absolutely put the Pennsylvania Posse to shame this weekend. Two feature wins and seven of the 10 top-five finishing positions, the home-state drivers absolutely defended the Tulare Thunderbowl this weekend, with Giovanni Scelzi going as far as to remark:

“California over the Outlaws.” — @GioScelzi

The @TulareRaceway crowd is absolutely loving it for the Fresno native. pic.twitter.com/Qq9D2iTmAQ

Hey @dirtvision how about showing something other then the top 4 for the 4th straight race.

That would be nice…

While I will concede that DirtVision could have made use of the double-screen at various points over the weekend, I’m not ready to jump down their throats over focusing so heavily at the front of the field at Tulare. Both Friday and Saturday night’s features saw the lead being challenged for during nearly their entirety, and regardless of what’s going on through the field, if the lead is in doubt that’s where the cameras belong.

It had been nine years since I visited (or even watched a race) at the Tulare Thunderbowl, so I had my doubts about the track opting to install an infield wall. After watching this weekend’s feature races, consider those concerns assuaged.

70 – percentage of top-five finishes scored by home-state Californians in the weekend’s two features at Tulare.

71 – days it took for Larson to win a dirt race in 2022… who honestly had that on their bingo cards for this season?

Where it Rated (on a scale of one to six cans with one a winner and a six-pack an instant classic): We’ll give the weekend four Holy Toledo IPAs from Tulare’s Kaweah Brewery. Friday’s feature was a gem, and there was some good stuff to see Saturday, though the preliminary action both nights was a little tepid thanks to a narrow racing surface. Friday’s support class racing also was lacking.

Up Next: The big-money event of the weekend again resides with the Lucas Oil Late Model Dirt Series, with the Indiana Icebreaker scheduled to run for $15,000 to win at the Brownstown Speedway in Indiana Saturday night. Coverage can be found on MAVTV Plus.