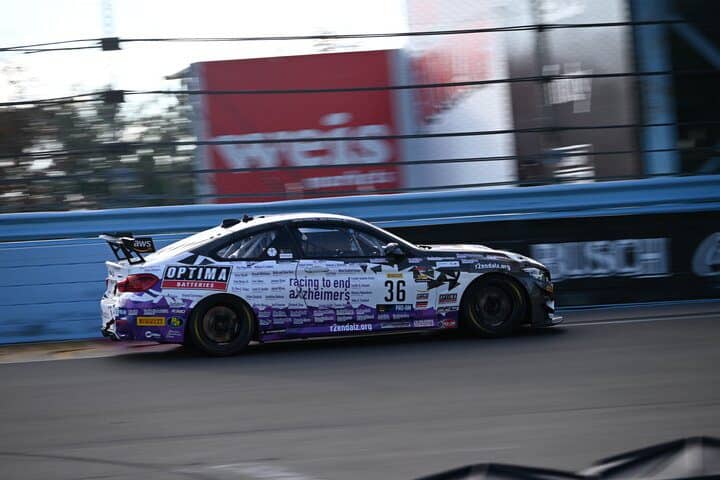 BimmerWorld Racing announced Wednesday (Feb. 16) that they have acquired two brand-new BMW M4 GT3s and will race them full-time in Fanatec GT World Challenge America Powered by AWS in 2022.  In addition, the team will remain in Pirelli GT4 America SprintX this year, but with only one BMW M4 GT4,

Team owner James Clay (pictured above last year at Watkins Glen) will share the No. 36 Optima Batteries-sponsored M4 GT3 entry with Ari Balogh, a gentleman driver who will also compete in IMSA Prototype Challenge.  The second M4 GT3 will be shared by veteran racer Bill Auberlen and Chandler Hull and carry sponsorship from TACenergy.  The team’s GT4 entry will will be shared by Devin Jones and James Walker Jr.

Clay was able to race a BMW factory-entered M4 GT3 back in November in the Creventic-sanctioned Hankook 24H Sebring along with Auberlen.  He came away very pleased with the new car.

“The M4 GT3 is a very well thought out and designed car,” Clay explained in a press release.  “It was intuitive to drive and nicely composed. I can’t wait for our team to dig in and really start learning the new machine!”

All six of the team’s drivers for 2022 are known quantities to the team.  Clay naturally owns the team and has driven himself for decades in various series.  Auberlen, Walker, Clay and Hull all drove for BimmerWorld Racing last year in Pirelli GT4 America SprintX.

Of the quartet of drivers that will compete in the 90-minute races in 2022, Auberlen is by far the most experienced in GT3 equipment.  He has raced full-time for Turner Motorsport in the IMSA WeatherTech SportsCar Championship’s GT Daytona class since 2019.  In that time, Auberlen has six class victories and 12 podium finishes in 33 starts.  He finished second in GT Daytona points in 2019 alongside Robby Foley.  In addition, Auberlen raced a modified BMW M6 GTLM in the GT Le Mans class for BMW Team RLL (at the time, BMW did not have a GT3-spec car and the Z4 GTE that had raced in the American Le Mans Series and the first couple of years post-merger was exclusive to North America).  In 22 races there, Auberlen had three victories, six podium finishes and finished second in GT Le Mans points in 2017.

Auberlen drove in Pirelli GT4 America SprintX last season alongside Walker in a Red Line Oil-sponsored M4 GT4.  Together, they finished sixth in Pro-Am points with a victory in Race No. 1 at Road America.  The duo had additional podium finishes at Watkins Glen and Sebring.

Clay drove the pictured No. 36 BMW M4 GT4 alongside Nick Galante.  The duo finished 10th in Pro-Am points with a pair of third-place finishes at Road America and Indianapolis.

Hull shared his TACenergy No. 94 with Jon Miller last year in the Silver Cup class.  They ended up sixth in points with a class victory at Circuit of the Americas and a third-place finish at VIRginia International Raceway.

Balogh has previously driven for BimmerWorld Racing, but much of that occurred years ago in the former Street Tuner class in what was the IMSA Continental Tire SportsCar Challenge.  In 2019, Balogh made two starts with the team in IMSA Michelin Pilot Challenge’s Grand Sport, finishing third at VIR alongside Mike Skeen.  Despite a significant amount of experience in sports car racing, this will be Balogh’s first go-around in GT3 racing.

Jones has significant experience with BimmerWorld Racing.  In 2018, he drove a BMW 328i for the team in the final season for the ST class in the then-Continental Tire SportsCar Challenge alongside Galante.  The duo claimed four class victories and won the final ST championship by 11 points.

After the ST class was disbanded, Jones joined up with Clay to race in Grand Sport.  Jones and Clay finished third in points in 2019 with second-place finishes at Sebring and Mid-Ohio.  He planned to race full-time for the team in 2020, but his season came to a screeching halt at VIR.

Jones’ BMW M4 GT4 suffered a brake failure on the run to turn 1.  That sent him flying off-course, through a tire curtain, over the fence and into the woods in a frightening crash.  Jones suffered a number of injuries in the crash that ended his 2020 season.

Jones returned to racing with BimmerWorld Racing last October at the Indianapolis 8 Hour.  Teamed with Galante and Walker, Jones finished third in the GT4 class.  Unfortunately, he suffered another injury back in December away from the track.

Jones is again on the mend from his injuries and plans to be ready to go for the Pirelli GT4 America SprintX season opener at Sonoma Raceway on April 16.  Jones will also bring sponsorship to his BMW from longtime backer VeriStor in addition to returning backing from Red Line Oil.