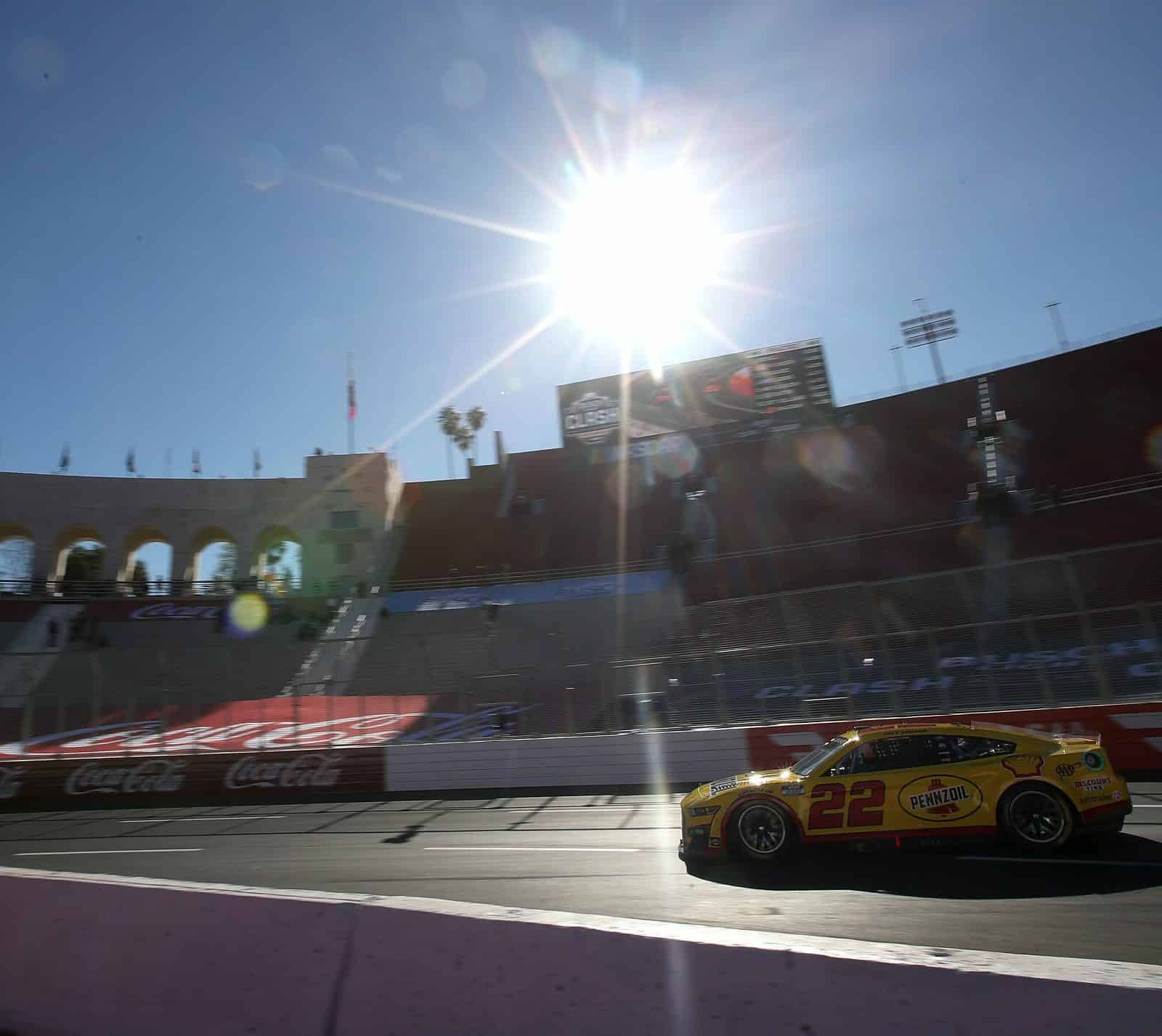 When did it hit you?

Was it seeing a mural of Bubba Wallace and Chase Elliott painted on a wall somewhere in Los Angeles?

Or Ricky Stenhouse Jr. recording a video of himself doing running exercises up the steps of the L.A. Coliseum?

Or was it the videos of Next Gen cars driving through the streets of L.A., going back and forth between a makeshift garage area and the ¼-mile track that had been constructed inside a football stadium?

Seeing these cars just cruising down the street heading to practice is a wild experience 🤯@Erik_Jones // @getfocusfactor pic.twitter.com/VRnpF9U36l

Whatever it was, at some point you finally had to accept a surreal fact: The Busch Light Clash at the Coliseum is a reality.

There have been plenty of surreal moments for NASCAR in the last four years:

– The inaugural weekend on the Charlotte Roval in 2018.
– The first race back from the COVID-19 shutdown at an empty Darlington Raceway in May 2020.
– The first Cup race on a dirt track since 1970 last year at Bristol.
– The Cup Series holding races on the Indy road course, Daytona road course and Road America for the first time.

But the Clash at the Coliseum, an exhibition race costing more than $1 million to put on and taking place minutes from downtown Los Angeles in a stadium that once hosted Super Bowls and the Summer Olympics, is another beast.

“For me, I think just the anticipation to get here and just get to look at everything in person is more than probably any other NASCAR race I can think of in my past,” said defending Cup champion Kyle Larson. “You’re always excited, but this is something new, different and temporary.”

Five months after it was originally announced, the first car to break the seal of the Coliseum’s track at full speed was Harrison Burton in Wood Brothers Racing’s No. 21 Ford.

Here is video of the first cars on track and the debut of NASCAR's Next Gen car at the Los Angeles Memorial Coliseum. Practice sessions for The Clash are underway. pic.twitter.com/knufUeyGlL

It was a slightly appropriate honor for NASCAR’s oldest active team.

The Coliseum’s track was inspired by the ¼-mile layout at Bowman Gray Stadium in Winston-Salem, North Carolina. NASCAR last raced there in 1971.

But back in the early ’60s, the track nicknamed “The Madhouse” was a playground for Wood Brothers Racing. Specifically co-founder Glen Wood, who won the team’s first three Cup races there.

At the end of nine collective practice sessions among three groups Saturday, Chase Elliott, another connection to NASCAR’s past, was atop the speed chart. Elliott, like many drivers here, seems primed and ready to embrace the Coliseum as part of the Clash’s present – and future.

“I think we all were probably kind of getting to the point with the Clash in Daytona (where) we needed to do something,” Elliott said. “That race was kind of just going on, I feel like, to go on. It added a week of being in Daytona and I feel like it was kind of becoming ‘all for what?’”

For Elliott, The Clash at the Coliseum “gives us an opportunity to not only have more eyes on this event, which is good; but also be able to promote the Daytona 500 through this event, which in my opinion, are two probably fairly major wins for everybody sitting here.”

While Sunday (Feb. 6) is the first NASCAR race held inside the Coliseum, it’s not the first held in its vicinity.

Kevin Harvick has been around a while. He, along with Kurt Busch, were among those who took part in old NASCAR Southwest Series races on the streets of L.A. back in 1998-99.

For Harvick, the Coliseum experiment “is way better.”

“I don’t think you can screw it up at this point, personally,” Harvick said Saturday after practice. “The event is here. The race track didn’t fly up. Practice went good. The cars all made the corners. People were passing each other and as our good friend Jim Hunter would say, ‘You have to have cars that pass, Kevin’ to make a good race. When you look at everything that has happened, the amount of tickets and media passes and all the things — you can’t screw it up at this point.”

“You can’t, I am telling you,” Harvick affirmed. “The race doesn’t even matter.”

If the next 24 hours don’t matter, where does NASCAR go from here?

“I think the All-Star Race is definitely something that could learn something from this just because of the fact that it needs to be more like this instead of just at a 1.5-mile track that we go to all the time,” Harvick said. “It needs to have that intrigue and fun and atmosphere that goes along with an event that is different. I am of the opinion that I would never do this twice, but I know that I will probably get overruled after this happens.

“It is kind of like the Roval, the intrigue isn’t as much the second year. I would move it all over the place. If this goes like everyone thinks it will, it will just blow the doors open to opportunities and I would take them.”