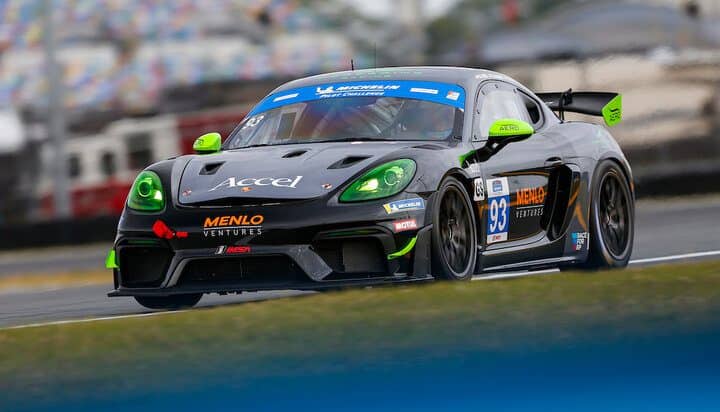 This weekend’s ROAR Before the 24 marks the North American debut for the newest GT4 contender from Porsche, the Porsche Cayman GT4 RS CS.  CarBahn Motorsports with Peregrine Racing’s Tyler McQuarrie put the new chassis to good use, sweeping both IMSA Michelin Pilot Challenge sessions Friday (Jan. 21) at Daytona International Speedway.  McQuarrie’s lap in the afternoon session at 112.983 mph ended up being the fastest lap of the day.

It did not take long for the Porsches to show their clout Friday.  Black Swan Racing’s Jeroen Bleekemolen put his No. 540 at the top of the chart in the first five minutes of the session before being beaten by PF Racing’s Austin Cindric.  McQuarrie set a lap at 112.544 mph 15 minutes into the session to take the top spot.  It ultimately held up for the remaining hour to be the fastest lap of the session.

McQuarrie’s lap was seven-hundredths of a second faster than TeamTGM’s No. 46 Porsche for Matt Plumb.  Jason Hart was third fastest in another Porsche for NOLAsport, a team that has spent the past three years racing in SRO America’s Pirelli GT4 America SprintX.  The last time Porsche introduced a new Cayman GT4 car, they came to Daytona to take delivery of it and test the No. 47.  That car then never raced in Michelin Pilot Challenge (a team car to the No. 47 did, though).

Cindric was fourth fastest in his Mustang, showing that he hadn’t lost anything despite not driving a Mustang GT4 since 2019.  KohR Motorsports’ Billy Johnson, a past Grand Sport champion in his own right, was fifth fastest.

Chad McCumbee in the No. 40 Ford for PF Racing was sixth, followed by McCann Racing’s Andrew Davis in that team’s first go-around with the Porsche.  BGB Motorsports’ Spencer Pumpelly was eighth, while Stephen Cameron Racing’s Greg Liefooghe and Riley Motorsports’ Julian Santero rounded out the top 10.  The top 13 teams were within one second of McQuarrie.  The three fastest cars were Porsches and five Porsches sandwiched three Mustangs in the top eight.

In TCR, owner-driver Victor Gonzalez Jr. was fastest in his Honda Civic Type-R TCR with a lap at 106.921 mph, good for 30th overall and the only TCR driver to complete a lap in under two minutes.  Gonzalez’s lap was one-sixth of a second faster than KMW Motorsports with TMR Engineering’s Tim Lewis Jr. in the sole Alfa Romeo.  JDC-Miller MotorSports’ Chris Miller was third, while Robert Wickens showed that he is adjusting to his hand controls very quickly.  He was fourth fastest, best of the Hyundais in one of his first times even driving the Elantra N TCR.  AJ Muss was fifth quickest in the No. 2 Hyundai.

IMSA MICHELIN PILOT CHALLENGE ROAR BEFORE THE 24 SESSION NO. 1 RESULTS

In the afternoon session, a number of drivers juggled the top times early on.  Hart set a quick time 18 minutes in that held up for the majority of the session.  However, McQuarrie came back and set the fastest lap of the day with less than five minutes remaining.

McQuarrie’s lap was a mere 13-thousandths of a second faster than Johnson’s Ford Mustang GT4.  McCumbee was third quickest, then Hart and Davis.  Bleekemolen was sixth in his Porsche, then Cindric and Murillo Racing’s Christian Szymczak in the best of the Mercedes entries.  TeamTGM’s Owen Trinkler was ninth in the No. 64 Porsche, while Capstone Motorsports’ Kris Wilson was 10th.

TCR saw Miller put his Audi RS3 LMS with the sequential transmission on top with a lap at 107.284 mph, good for 31st overall.  Miller’s lap was nearly three-quarters of a second faster than Gonzalez.  Lewis was third, then Bryan Herta Autosport teammates Parker Chase and Mark Wilkins.

IMSA MICHELIN PILOT CHALLENGE ROAR BEFORE THE 24 SESSION NO. 2 RESULTS

Michelin Pilot Challenge teams have two one-hour sessions on Saturday.  The action starts bright and early at 8:45 a.m.  The second session is after qualifying for the Rolex 24 Qualifying Race at 4:50 p.m.  There is a chance of rain during the day as well.