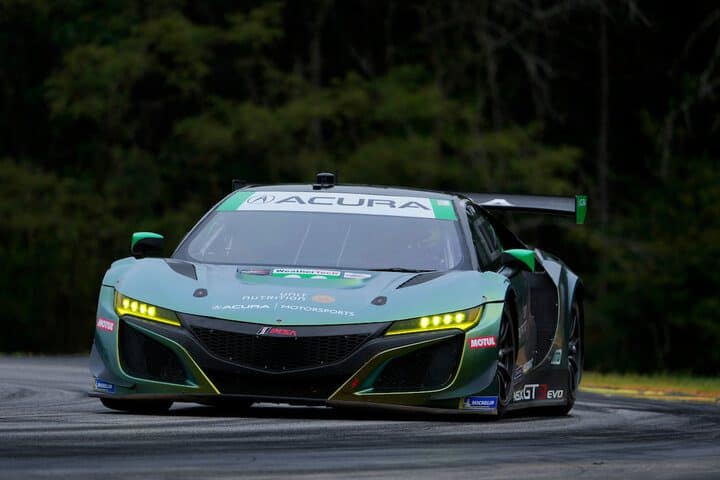 Gradient Racing announced Tuesday (Jan. 4) that they will switch their emphasis in the IMSA WeatherTech SportsCar Championship away from the WeatherTech Sprint Cup to the Michelin Endurance Cup for the 2022 season.  The team has upgraded their Acura to the new Evo22 specification and will compete in the Rolex 24 at Daytona for the first time later this morning.

Driving in all four of the endurance events in 2022 will be Mario Farnbacher, Till Bechtolsheimer and Road to Indy prospect Kyffin Simpson.  Marc Miller will return to the team to race in the Rolex 24.

“This will be my 20th season racing professionally, and though I’ve run this race a handful of times, and we made it on the podium last year with one of our clients, this is the first time we’re doing it fully in-house,” said Andris Laivins, team manager for Gradient Racing.  “It’s a big deal for our team.  With our hardworking group of women and men, an updated NSX GT3 Evo22, and great technical support from HPD, we are going to Florida with a good package.  Daytona is a big race, it feels special every time you get to do it.”

Farnbacher is the 2020 GT Daytona class champion with Meyer Shank Racing with Curb-Agajanian.  After MSR returned to the prototype ranks, Farnbacher pieced together a part-time schedule, mostly with Compass Racing.  He also drove in the Rolex 24 for Magnus with Archangel.  His best finish was fifth in class at Mid-Ohio in May.

Compass Racing made the decision to skip the WeatherTech Sprint Cup finale at VIRginia International Raceway last October in order to focus on the Indianapolis 8 Hour.  Prior to the race, Miller tore his achilles tendon, putting him on the shelf

The move allowed Gradient Racing to bring in Farnbacher to sub for Miller at VIR.  Unfortunately, the team’s race ended early after a crash that left them at the rear of the field.

Simpson will be making his IMSA debut in the Rolex 24.  He is a recent graduate of the HPD Academy, a development program for would-be Acura GT3 racers.  Like many sports car racers, Simpson comes from an open-wheel background.  In 2021, he split his time between the Formula Regional Americas Championship powered by Honda and the Indy Pro 2000 Championship powered by Cooper Tires.  Simpson won the Formula Regional Americas Championship on the strength of seven victories in 16 races.  He finished eighth in Indy Pro 2000 points with four top five finishes.  His best finishes were a trio of third-place finishes at Indianapolis (Race No. 2), Road America (Race No. 2) and Mid-Ohio (Race No. 2)

“I’m extremely excited to be racing in the Rolex 24 [this] month, and I’m honored to represent Acura at such a huge event!,” Simpson said in a press release.  “Considering this will be my first endurance race, you could say I have been thrown in the deep end but thanks to Acura, Jon Mirachi and the HPD Academy team, I feel very prepared for racing the NSX GT3 Evo22 with my new teammates.  This Christmas break has been my busiest ever with testing, watching old races and training.  I can’t wait for the first session at the [ROAR Before the 24] in a few weeks’ time.”

Bechtolsheimer and Miller’s time at Gradient Racing actually pre-dates the team being known as Gradient Racing.  Both drivers originally signed to drive for the team when it was known as CJ Wilson Racing in the Grand Sport class of the then-Continental Tire SportsCar Challenge.  At first, they drove separate cars, but they were teamed together starting in 2017.  In 2018, the duo moved up to the WeatherTech SportsCar Championship and ran two races.  After moving to GT World Challenge America for 2019, the team returned to race in the WeatherTech Sprint Cup in 2020 and 2021.