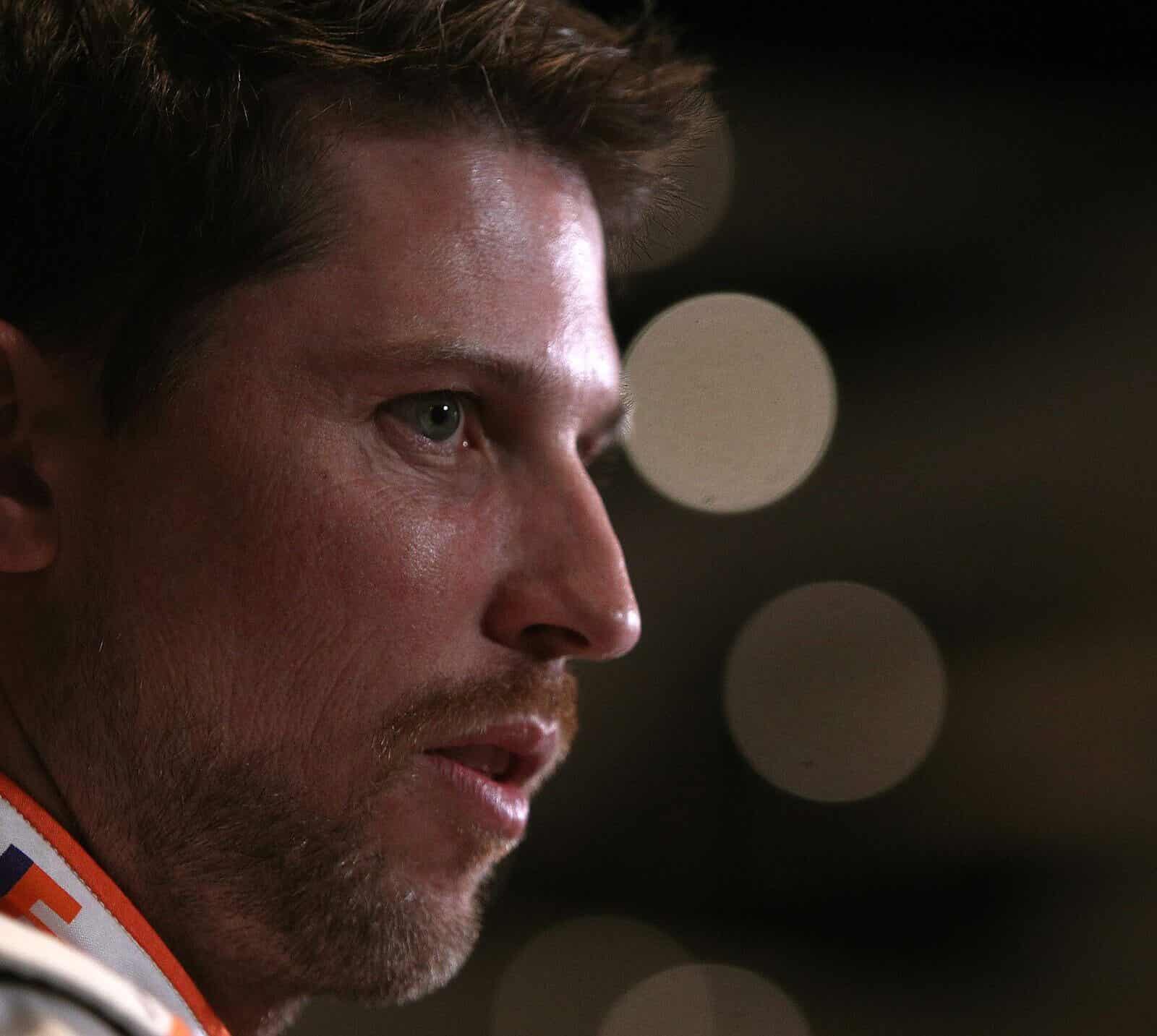 PHOENIX — If you’re just now joining the 2021 NASCAR Cup Series season in progress, the last time we saw Denny Hamlin he was having a … moment.

It came Sunday (Oct. 31) at Martinsville Speedway, where Hamlin secured a spot in this weekend’s Championship 4 at Phoenix Raceway.

He did so after being spun from the lead by Alex Bowman with seven laps to go. Hamlin wound up 24th but made sure no one forgot about him. He promptly impeded Bowman’s victory celebration on the frontstretch, using his No. 11 car to keep Bowman from moving his as fans went crazy in the stands, including one lobbing a beer can at Hamlin’s car.

Hamlin added to the chaos in his post-race interviews, calling Bowman a “hack” and “(expletive) terrible” before criticizing fans who jeered him as Chase Elliott supporters who “don’t think straightly.”

It’s now Thursday (Nov. 4), four days later, and Championship 4 weekend has officially started in Phoenix. How does Hamlin move on from such a volatile moment?

Who said he wanted to?

“How do I get up every morning and take my kids to school at 7:30?” Hamlin posited during Thursday’s Championship Media Day. “How do I go to 23XI (Racing) and work for a couple days in the middle of the week during the playoff run? I live in chaos. I thrive under chaos. … The more shit that’s stirred up around me. The more I come at it. I don’t mind things like that.”

Hamlin had contributed to that volatility on Twitter in the days after Martinsville.

I don’t expect you to understand my emotions. You don’t see the time I spend working on my craft. You don’t see the work these teams put in. You haven’t been taken out twice in the last 10 weeks. One costing us RegSeason championship. The other nearly ending our season.

I got here through the hardest path possible. No last name, no money, no backer. I’m blessed beyond words. I’ve spent 16 years trying to accomplish this sports highest honor. This week brings a new opportunity to achieve it. I’m ready. My team is ready. F*k!n bring it..

Hamlin is savvy enough to know his particular brand of controversy, which has ensnared two Hendrick Motorsports drivers and their fans, can be good for business.

“I can tell you from an engagement standpoint, there’s a boost,” Hamlin observed, using his hand to show a rising motion. “So they’re actually doing me a favor more than anything.”

In fact, Hamlin claims everything happening right now is leaving him in a better headspace.

“I have so much fuel in my tank right now,” he said. “… There’s a lot of motivation there.”

Chief among them for the 40-year-old driver is a championship.

Hamlin has won 46 times on the Cup circuit. But none of those victories have ended with him hoisting the Cup championship trophy. He’s the winningest driver in NASCAR’s modern era not to win a title.

Silencing his critics is just another ingredient of Hamlin’s chaos-flavored milkshake.

“Everyone’s go-to is, ‘you haven’t won a championship,’ because there’s nothing else they can say,” Hamlin said. “People don’t get in my head in a negative way. I turn it into positives, into motivation. Some people like to go in a hole and hide from it. I do not. I go at it head-on. And anyone who’s around me knows and a lot of you in the media followed my career and when things go haywire or shit hits the fan, usually we come out swinging, and we will come out swinging again.”

Hamlin feels he’s been proving doubters wrong in a year where he’s won twice and earned 18 top-five finishes, making him the most consistent driver not named Kyle Larson.

“What was the conversation earlier this year? ‘Oh my gosh, (he’s) starting (23XI Racing), you’re gonna be so distracted,'” Hamlin said. “I haven’t heard that at all this year, because our performance shows otherwise. Because I find a way to compartmentalize each part of my life and make sure to turn on the switch to this one at this time. … And it’ll be no different when I strap on the helmet on Sunday.”

This isn’t Hamlin’s first brush with the championship. He was part of the Championship 4 the last two seasons, placing fourth in the final standings each time.

In 2010, the title came down to him and Jimmie Johnson, who eventually won his fifth consecutive Cup championship.

How is this year different for Hamlin, a man who’s won almost everything else there is to win in NASCAR and who thinks chaos serves him well?

“Certainly, I’m more comfortable … in who I am,” Hamlin said. “Back in 2010, I didn’t have the big race wins that I have now, I certainly know that I am a championship-caliber driver. There’s no question in my mind. Circumstances have not always worked out in my favor. Performance hasn’t always been good enough. But certainly, we are as deserving as any.

“And so in 2010, I would have said, ‘Am I really good enough to do this?’ I had (eight) wins in 2010. And I was battling Jimmie, and honestly, things out of my control took us from locking it up to losing. … I got in my own head, and then I messed up … I just wasn’t as comfortable then as what I am now.”

Does Hamlin really have his $#!+ together or is he just trying to convince himself that he won’t choke on Sunday? Sounds to me like he’s already got a mind full of chaos. We’ll see.

I can’t help but chuckle at what you said. It’s almost like Hamlin has his own “crystal ball” that he pulls out every now and to make himself feel good. No harm in his attitude. I look so forward to Sunday. I will die laughing when that man has to eat “crow” pie.

Uh oh sounds to me like the pressure is getting to ole’ Denny. If he was smart he would keep his mouth shut and just go race. Hee Hee.

lololol brainwashing oneself lololol
Already choking lololol
Pood Denny-
The kids are with Jordan and she’s not with you anymore. The “hack” won Martinsville and how did you respond. Now your talking to yourself and it’s only Thursday.

Pathetic. Cannot believe Coach puts up with him.

One day closer Denny. How are your nerves doing today ?

LOL.. I don’t get what he’s trying to prove…. That he can talk trash with the best of them? That feeding the flames of controversy is a wise thing?
Most championship contenders want the fewest distractions possible leading up to the big game and it’s for a reason. Those distractions take your eyes off of your goals. Don’t get me wrong, he has had a year second only to Larson so I wouldn’t bet against him, but I don’t get what he thinks he’s doing.
.
ABH!!!!.