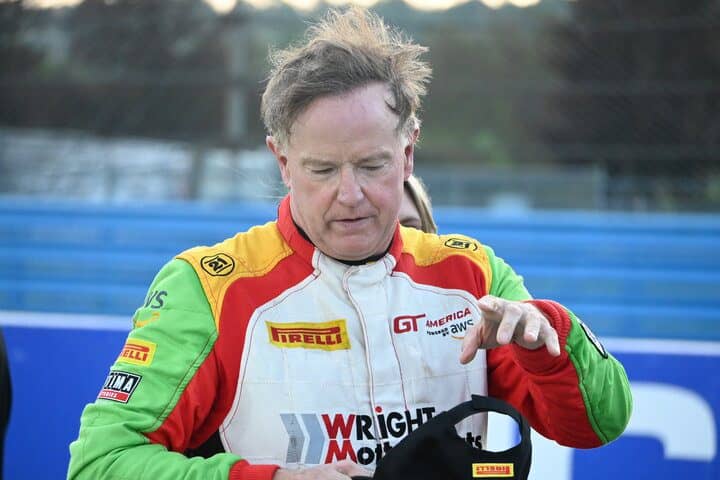 After skipping the past four race weekends, Inception Racing’s Brendan Iribe swept the final two GT America Powered by AWS races of the year at the Indianapolis Motor Speedway Friday and Saturday in dominant fashion.  Wright Motorsports’ Charlie Luck (pictured above at Watkins Glen) wrapped up the inaugural GT America Powered by AWS overall championship and the Masters championship.

“Man, what a relief,” Luck told SRO America’s Amanda Busick Friday (Oct. 15).  “It’s five years of work on so many people’s parts.  To do this at Indy, could it get any better than that?  I don’t think so.”

In Luck’s case, this is a second racing career for him.  In the 1980s, Luck competed in what is now the Xfinity Series, typically driving a self-entered No. 45 Pontiac or Oldsmobile with sponsorship from Luck Stone, one of his family’s companies that are under the umbrella of The Luck Companies today.  In 106 starts, Luck had five top five and 38 top 10 finishes.  His best finishes were a pair of second-place finishes at Martinsville in 1982 and at Orange County Speedway in 1986.  His best finishes in points were a pair of ninths in 1984 and 1986.

After decades out of the car and in the business world.  Luck returned to racing a few years ago.  Starting in 2018, he entered IMSA Porsche GT3 Challenge Cup competition with Wright Motorsports.  After showing gradual improvement and a couple of spot starts in IMSA Michelin Pilot Challenge, 2021 marked Luck’s first year racing full-fledged GT3 equipment.  He adjusted quickly, scoring two overall wins (VIR Race No. 1 and Watkins Glen Race No. 1) and always running competitively.

Friday afternoon’s first race of the weekend saw Iribe win the pole, but a false start led to the race starting behind the safety car.  Once the race finally got underway, Iribe and Luck raced for the lead early on.  With a number of the GT3 entries forced to start at the rear of the field and Iribe qualifying 1.822 seconds faster than anyone else, a runaway was in play.

However, before we could get there, Matt Rivard spun his new Ginetta G56 for Dexter Racing into the gravel in turn 3 on the restart, drawing another safety car period.  On the restart, Rearden Racing’s Jeff Burton almost got stuck in the turn 6 gravel trap.  However, he was able to power through and keep his Lamborghini Huracan GT3 from getting stuck.

At his fastest pace, Luck was roughly a second a lap slower than Iribe’s McLaren 720S GT3.  At worse, it was closer to two seconds and change.

The man on the move during the race was TKO Motorsports’ Memo Gidley, driving a Bentley Continental GT3 serviced by Flying Lizard Motorsports.  Gidley failed to start the formation lap on time, forcing him to drop to the rear for the start after qualifying third.  From 20th on the grid, Gidley slowly made his way forward in and around the early cautions.  By the end of the second full green-flag lap, Gidley had been able to get past all of the GT4 cars and started picking off GT3 cars.

Gidley was able to get up to fourth overall before he was forced to slow due to his hood unlatching.  An unscheduled pit stop to properly secure the hood resulted in Gidley finishing a lap down in ninth.

Iribe was never seriously challenged en route to his third win of the year.  His margin of victory was 36.789 seconds over Luck, who won the Masters division.  GMG Racing’s Kyle Washington was third in his Porsche, then Zelus Motorsport’s Jason Harward.  Flying Lizard Motorsports’ Andy Wilzoch was fifth.

“The team.  It’s all about the team,” Iribe told Busick when asked what makes him so fast.  “We put together a great team and great teams can do great things.

In GT4 competition, GMG Racing’s Jason Bell passed Stephen Cameron Racing’s Sean Quinlan early and pulled away to take his fourth win of the season.  The Heart of Racing’s Gray Newell was 4.086 seconds back in second, then Quinlan, NOLAsport’s Scott Noble and Rotek Racing’s Robb Holland.

GT AMERICA POWERED BY AWS AT INDIANAPOLIS RACE NO. 1 RESULTS

By virtue of setting the fastest lap in Race No. 1, Iribe was back on the pole midday Saturday (Oct. 16) for another 40 minutes of racing.  This time, Gidley was alongside.

Much like on Friday, Iribe was only really within reach for the first lap or two.  Once he broke clear of Gidley, the race was really to see just how far Iribe could get in front of the rest of the field as he drove away to secure the weekend sweep.Iribe ended up 29.940 seconds ahead of Gidley at the finish.  Luck was another 15 seconds back in third, good enough for the Masters weekend sweep.  Washington was fourth, while Burton was fifth.

In GT4, the championship was effectively decided before the race even went green.  Quinlan’s BMW pulled off from the pit lane for the formation lap without issue, but then stalled exiting turn 4.  He was able to get his BMW M4 GT4 restarted and drove it back around to the pits.  The crew lifted the hood and tried a variety of fixes.  However, nothing worked.  The team pushed the car behind the wall and did not return.  As Quinlan did not complete a lap, he was not classified in the final results.  He earned no points.

That meant that Bell was effectively home free.  He just had to make it to the finish to claim the title.  Newell was able to snatch the class lead away from Bell just before halfway.  From there, Newell pulled away to take the win.

Newell’s margin of victory was 4.485 seconds over Bell, who takes the GT4 championship.  ROTR Motorsport’s Alex Welch was third in his Audi, then Noble and Rivard.

With Quinlan’s retirement, Bell claimed the title by 13 points over Quinlan.  Holland was third in points with his Ford Mustang GT4, while Welch was fourth.  Newell’s victory moved him up to fifth.

GT AMERICA POWERED BY AWS AT INDIANAPOLIS RACE NO. 2 RESULTS