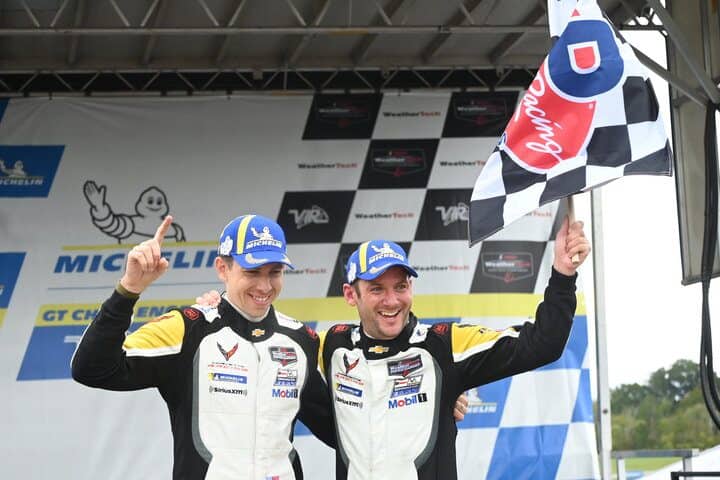 AFTON, Va. – Corvette Racing’s Nick Tandy was able to get past teammate Antonio Garcia with 53 minutes to go.  From there, he was able to pull away to give himself and teammate Tommy Milner the victory in the Michelin GT Challenge at VIR Saturday (Oct. 9).  It is Milner and Tandy’s second consecutive victory.

“I’ve got to give full credit to Corvette Racing, Chevrolet and the guys and girls on this team,” Tandy said during the post-race press conference.  “It started with Tommy [Milner] putting it on pole and Jordan [Taylor] again on the front row for Corvette Racing. From the start, we split strategies and nailed all the stops on the strategy from there. The car was bulletproof.”

Milner admitted during the press conference after the race that he was in the wrong engine mode at the start.  That allowed Taylor to take the lead exiting turn 1 on the first lap.

Taylor immediately pulled out a sizable lead on the first lap of nearly 1.5 seconds.  Milner was able to pull that advantage over the next few laps.  Further back, WeatherTech Racing used an alternate strategy, pitting 21 minutes into the race to put Kevin Estre in the car in place of Cooper MacNeil.  That put the Porsche at the rear of the field behind the GT Daytona entries.

Estre slowly but surely knifed his way through the entire GT Daytona class to get back to third overall, but he ended up 40+ seconds behind the Corvettes once he did.  Meanwhile, Taylor continued to lead until the first round of stops.  He chose to stay out longer while Milner pitted shortly after the 40-minute mark in order to check WeatherTech Racing’s strategy.  As a result, Tandy was able to jump over Garcia into the lead, but was on older tires.

The race’s one and only full course caution closed everything back up.  It came out just before the halfway point when Gradient Racing’s Mario Farnbacher slid off-course in the Roller Coaster section of the track.  Once on the wet grass, he was a passenger as his Acura NSX GT3 went hard into the tire barriers.  Farnbacher was able to walk away from the crash, but he was done for the day.

During the stops, Garcia was able to jump back over Tandy.  Shortly after the restart, Estre was able to get himself into second and was rather rough about it, rooting and gouging his way forward.  Estre did attempt to make a move on Garcia for the overall lead, but was unsuccessful.

As the run continued on, Tandy was able to get back past Estre for second, then ran Garcia to take the lead.  Once in front, Tandy was able to slowly pull away.  The final round of stops gave the Corvettes a big cushion over the Porsche.

The race was going to be fairly close to the end until 10 minutes were left in the race.  Garcia entered turn 1 underneath Turner Motorsports’ Bill Auberlen.  He lost the rear end of his Corvette and spun, hitting Auberlen in the process and spinning out the BMW.  That dropped him well back, allowing Tandy to coast to victory.

The margin of victory for Milner and Tandy was 17.852 seconds over Taylor and Garcia.  Estre and MacNeil were third, another 21 seconds back.

In GT Daytona, Turner Motorsports’ Robby Foley started from the pole and led early without any real trouble.  Paul Miller Racing’s Madison Snow gave chase at first, but lost his spot to CarBahn Motorsports with Peregrine Racing’s Richard Heistand.  Heistand was able to get within a second of Foley, but could get no closer.  As the run continued on, Foley slowly began to pull away.

Further back, PFAFF Motorsports’ Zacharie Robichon was a man on a mission.  After losing all of his times in qualifying Friday due to the crew violating IMSA’s no-touching rule during the qualifying session, Robichon started 13th in class and quickly made his way to seventh in the opening laps.

Robichon got the PFAFF Porsche up to fifth prior to the first round of stops.  Foley stopped 49 minutes into the race to hand over to Auberlen while Robichon gave way to Laurens Vanthoor.  When the round of stops ended, Auberlen was in the class lead with Bryan Sellers second and Vanthoor third.

The Farnbacher caution brought the majority of the GT Daytona pack to the pit lane.  Vanthoor took a short fill of fuel to jump over both Auberlen and Sellers to get out first.  That only allowed him to keep third in class as both GRT Grasser Racing Team’s Franck Perera and Gilbert/Korthoff Racing’s Mike Skeen had stayed out.

While Skeen pitted shortly after the restart, it took Vanthoor five laps to get past Perera for the class lead.  Much of the rest of the race saw Vanthoor, Auberlen and Sellers racing together, separated by no more than a couple of seconds.

The three drivers were pretty much equal on pace, meaning that alternate means would have to be used.  Turner Motorsport decided to undercut Vanthoor on their final pit stop by going for fuel only.  That took Auberlen from a second and change behind to eight seconds ahead.  Meanwhile, Vanthoor was on fresh tires and gaining multiple tenths each lap.

The contact with Garcia in turn 1 ultimately decided the race.  Auberlen still had a six-second lead when he spun following the unintentional contact.  The contact cut Auberlen’s right rear tire, forcing the veteran racer to putt around for nearly three miles on a flat tire before pitting.  Auberlen and Foley ultimately finished a lap down in 12th.

The contact gave Vanthoor a lead that he would not relinquish as he held on to give himself and Robichon their fourth win of the year.

“This is probably the [win] I’m happiest about so far because yesterday was our mistake, a stupid mistake,” Vanthoor said during the post-race press conference.  “Today, the guys made up for it with triple the [effort] because what got us in front was the pit stop, amazing what they did.  And [Zacharie Robichon], the overtakes at the start and how quickly he got by and got up to the front, that’s probably those two things that gave us the race.”

The margin of victory was 2.755 seconds over Paul Miller Racing’s Sellers and Snow.  Vasser Sullivan’s Jack Hawksworth executed a bump n’ run on the final lap in turn 1 to put himself and Aaron Telitz on the podium.  Wright Motorsports’ Trent Hindman and Patrick Long were fourth, while The Heart of Racing Team’s Roman DeAngelis and Ross Gunn were fifth.

With one race remaining, the GT Daytona championship is a vertiable dead-heat.  Vanthoor and Robichon have a 20-point lead over Sellers and Snow.  20 points is less than the difference between a victory and finishing second.

The fifth-place finish for DeAngelis and Gunn was good enough to unofficially earn them the WeatherTech Sprint Cup championship.  Their margin of victory was 79 points over Sellers and Snow.

The IMSA WeatherTech SportsCar Championship will conclude with the Motul Petit Le Mans, a 10-hour endurance race at Michelin Raceway Road Atlanta on Nov. 13.  The broadcast of the race will start at Noon ET on NBC, then move to NBCSN at 3 p.m. for the remainder of the event.  Frontstretch will be on-site in Braselton to bring you all of the action.