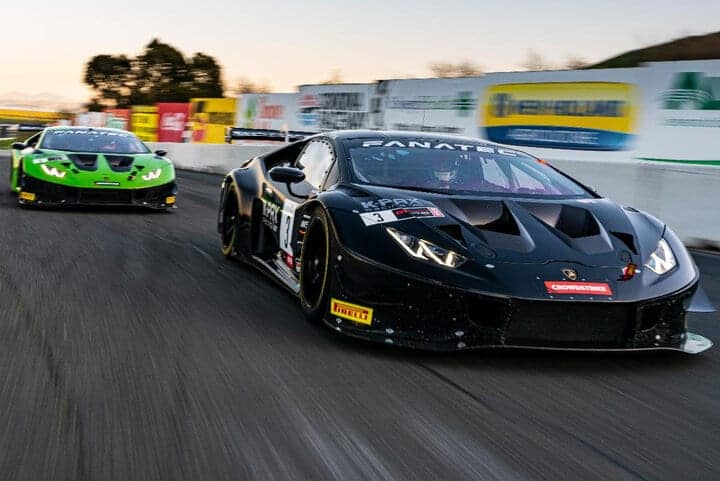 K-PAX Racing’s Andrea Caldarelli and Jordan Pepper won Round No. 2 of the Fanatec GT World Challenge powered by AWS Sunday afternoon (March 7) at Sonoma Raceway.  It is the second day in a row that the Lamborghini duo walked away with the spoils.  Despite that, K-PAX Racing had a slightly different mentality at play here.

“This weekend was sort of a test for us – it was the first race of the season after just receiving the cars,” Caldarelli said after the race.  “We knew we were going to be competitive despite not having any expectations.  We just tried to run smoothly with no mistakes, and the results speak quite well.  We had a very good weekend and collected a lot of data, so we can continue to get stronger with every round.”

For the rest of the field, a statement like that sounds like trouble.  But, it is true.  K-PAX Racing has fielded Bentleys for the past three years, originally with the first generation Continental GT3, then the new car.  With Bentley ceasing support of their GT3 racer at the end of last year, everything is new for K-PAX.  Lamborghini brings factory backing and factory drivers to the team, but the team has to get used to the Huracan GT3 EVO.

As compared to Saturday’s race, this event was more difficult for tK-PAX Racing, which bases their operations on the grounds at Sonoma Raceway.  Coming to the green, Pepper had some kind of fuel pick-up problem coming to the line, which resulted in teammate Giovanni Venturini running into the back of him.  DXDT Racing’s Colin Braun took advantage of  this issue to sweep past into the overall lead.  Wright Motorsports’ Jan Heylen followed into second while Pepper ended up fourth.

After that potential disaster, Pepper buckled down.  At turn 4 on the first lap, Pepper made a move for third on Racers Edge Motorsports’ Dakota Dickerson.  A couple of turns later, he was back to third.  Venturini followed through as well.

With the clean air out front, Braun was able to pull out to a decent lead over Heylen and Pepper.  As the tires continued to wear, Heylen began to run down Braun.  Right before the halfway point, Heylen caught up to Braun’s Mercedes and began pressuring him.  Unfortunately for Porsche, Heylen was unable to get past.

Pepper pitted early in the 10-minute pit window in order to get fresh rubber and turn his Huracan over to Caldarelli.  Venturini followed in step.  Meanwhile, Braun and Heylen stayed out for an extra four laps to try to set some quick laps before turning their cars over.

In practice, this was not a strategy that was going to win the race overall.  It was one that could win the Pro-Am class, though.  When Braun pitted to hand over to George Kurtz, Caldarelli swept past into the overall lead with Corey Lewis five seconds back.

After the pit stops, the race became the K-PAX benefit as Caldarelli and Lewis pulled from the field by multiple seconds per lap.  They were able to settle into a comfortable pace that was well ahead of the rest of the pack.  From there on, Caldarelli was able to lap all but the top three finishers on his way to the weekend sweep.

Caldarelli and Pepper’s margin of victory was 7.898 seconds over Lewis and Venturini.  Winward Racing’s Philip Ellis and Russell Ward ended up a lap down in third in Pro.

In Pro-Am, the battle between Braun and Heylen was the race.  A quicker pit stop for DXDT Racing allowed Kurtz to assume a sizable lead over Wright Motorsports’ Fred Poordad.  Just four laps after the stops, Kurtz’s lead over Poordad was already 13 seconds.

That was ultimately Kurtz needed as he pulled away to take the win.  Due to the placement of the overall winners, Braun and Kurtz technically won the race by a full lap over Heylen and Poordad.

Further back, Taylor Hagler was well positioned to claim third in Pro-Am for herself and teammate Dickerson.  However, Hagler ran up on the No. 63 Mercedes of DXDT Racing’s David Askew late in the race.  Despite being a lap down to Hagler due to an earlier spin and unscheduled pit stop, Askew appeared to make it rather difficult for Hagler to get around him.  That allowed Erin Vogel in the No. 19 Mercedes for DXDT Racing to catch up.  Vogel was able to put her car underneath Hagler for the position, but Hagler was able to hold her off.  Eventually, Askew went wide in turn 11, allowing Hagler and Vogel past.

Once past Askew, Hagler was able to pull away to take third in Pro-Am for the second straight day.  Vogel and Michael Cooper had to settle for fourth, while Compass Racing’s Matt McMurry and Rodrigo Sales recovered from an early unscheduled stop to finish fifth.

Fanatec GT World Challenge America powered by AWS teams will take the next few weeks off.  Round No. 3 is scheduled to be held at Circuit of the Americas near Austin, Tex. on May 1.  That race will be streamed live on the GT World YouTube channel.