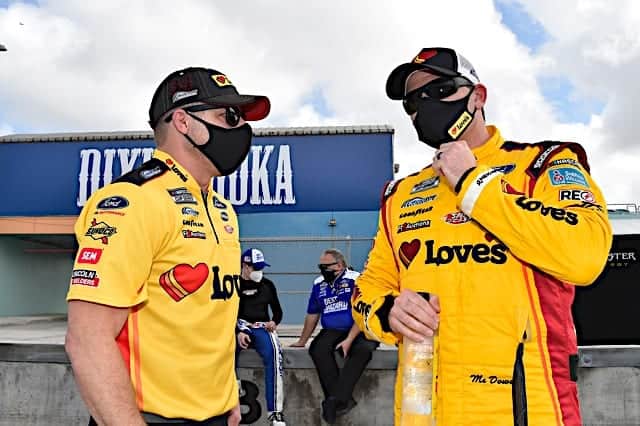 Putting labels on something — especially ahead of time — can be dangerous.

Sometimes, it comes back to haunt you.

In NASCAR, the most successful example of giving an event a label, or an awesome name, in advance was 1992’s Cup Series All-Star Race. You may also know it as “One Hot Night.”

Thanks to Dale Earnhardt, Davey Allison and Kyle Petty, Charlotte Motor Speedway and NASCAR wound up not being embarrassed.

Flash-forward 29 years. The marketing wizards at Fox Sports have given us “Best Season Ever.”

It makes for a heck of an ad.

Here we are now, with the first three races of the Cup Series season in the books. Somewhat surprisingly, every driver referenced in the above ad — Danny Hamlin, Kevin Harvick, Joey Logano, Chase Elliott, Kyle Busch, Ryan Blaney and Bubba Wallace — is winless.

How weird is it?

You know it’s not your typical NASCAR season when you find yourself staying up until 1:30 a.m. to research one stat.

Hours after the end of Sunday’s (Feb. 28) Cup Series race at Homestead-Miami Speedway, won by William Byron, that’s the situation I found myself in, nose-deep in racing-reference.info.

My goal: Find out how long it had been since three separate driver/crew chief pairings earned their first wins in the first three races of a Cup season.

Eventually, my late-night search brought me to 1982.

That year, the first three Cup races were won by Bobby Allison and Gary Nelson (first start together), Dave Marcis and Claude Queen (third season together) then Darrell Waltrip and Jeff Hammond.

Like Waltrip and Hammond, the Byron and Fugle pairing got its win in their third Cup start together.

To not have something like this happen in 39 years, that’s weird, right?

“With the weird winners we’ve had so far, and I don’t think we’re weird, but it kind of is a little bit weird,” Fugle said Sunday night of the season’s opening volley.

What do once-in-40-years levels of “weird” mean for teams the rest of the season?

“You have to be careful that you’re not going to get too many one win (teams), so you want to keep attacking for that reason,” Fugle said. “We want to learn how to be a winning race team. In the playoffs, to win a championship you have to win a lot of races, so we have to learn how to do that now and get used to that to be able to contend for a championship.”

Continuing to add to the weirdness is McDowell. After upsetting the field in the Daytona 500 to earn his first win in 358 starts, he’s … sticking around?

When the Front Row Motorsports driver entered this season, he had a total of 12 career top 10s. A career-best four of them came last year.

When the checkered flag waved Sunday, there was McDowell taking home a sixth-place finish. Following his eighth-place run on the Daytona road course, he has three consecutive top 10s for the first time. The only other driver with that distinction this season: former champion Harvick.

Going to Las Vegas Motor Speedway this weekend, McDowell is fourth in the point standings. Meanwhile, someone like Kyle Busch is 18th.

McDowell was asked what his response would have been to being told in the preseason he’d start out with three consecutive top 10s.

“That they’re crazy,” he replied. “I think that we are realistic about where we finished (2020) and where we wanted to be, and we thought that we were in that 15th-to-20th range pretty consistent last year.

“To make a big jump like we did, I wouldn’t say that it’s a complete, unbelievable shock, but it’s pretty close to it. We have definitely out-performed where we thought we’d be, especially on the mile-and-a-half (tracks). These places, especially these slick places are really tough for the smaller teams. I think that at the same time we had a good run here last year (finished 15th) and [had] something to build on, so we came back and made some improvements, and yeah, we kind of shocked ourselves.”

Here’s another McDowell-oddity for the road.

The steady drumbeat warning of the approaching “youth movement” over the last few years, including then 24-year-old Elliott winning the Cup title last year, has now turned into a gong loudly announcing its arrival.

Through eight national series races in three weeks, 36-year-old McDowell is the only driver over the age of 26 to win a race.

That may be a lot to wrap your head around. But it’s definitely not boring.

Given that and with NASCAR heading to “anything goes” Las Vegas, I propose a new, hashtag-friendly slogan for the 2021 season.

Follow @DanielMcFadin and check out his show “Dropping the Hammer with Daniel McFadin” on YouTube and in podcast form.

It could easily be 4 first time pairings if Kyle Busch could win at Vegas. KB winning at Vegas certainly wouldn’t be surprising to anyone.

An anomaly is something that’s….weird, right?