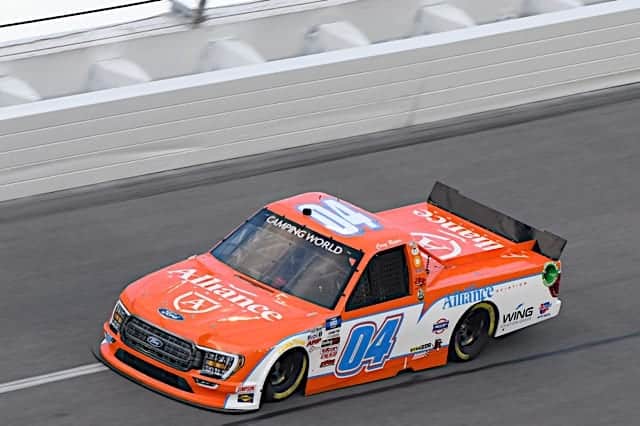 As the NASCAR Camping World Truck Series field worked its way down the backstretch coming to the checkered flag at Daytona, Cory Roper had nobody in view in his front windshield.

It was an unfamiliar sight.

But the independent racer knew he was in a compromised position. The underdog had slammed the wall while getting a push from defending series champion Sheldon Creed not long before and couldn’t block the eventual run from winner Ben Rhodes on the final turn.

So the No. 04 bright orange Ford F-150 watched a potential win melt away. But he still came across the finish line in third as the field wrecked across the line, the best result of his young Truck career.

Coming to the finish and having clear track ahead, Roper looked in his mirror to see which runs were building. The only problem was his rear-view aid was mispositioned, so he could only see the top of the trucks.

“I knew I was a sitting duck whenever I didn’t feel a push,” Roper said in Zoom media availability post-race. “I knew I got too far off out coming off of (turn) 2 and got too big of a gap. I’m still learning where I need to position things in the truck to be able to race something like this different than anywhere else.

“I wish I had another shot at that, but you gotta be grateful for what you’ve got, we’ll take it, move on and build from it.”

It’s hard for Roper, largely unknown in NASCAR circles, to imagine scoring a top five at Daytona International Speedway of all places and being in contention for a victory. The Texan made his Truck Series debut only three years ago, in 2018, with his family-owned-and-operated team.

Heading into 2021, the plan is to run full time for the first time in Roper’s career (something that was planned in 2020 but eventually fell through). To open his season with a third-place run is invaluable in the form of finances and confidence for him as a driver.

“Anytime you can finish good and have a great finish like this and be able to bring funds to better your equipment, it’s huge,” he said. “To get started off the year with a good points night is a lot easier than trying to catch up from a bad night. The difference between last year and this year is we’re trying to build a team, get our shop completed. We were able to get quite a few good runs last year. We just had some bad luck.”

Roper said the team secured new equipment in the offseason, including chassis, plates and dynos to name a few, and estimates that with the NextEra Energy Resources 250 winnings, they’ll be able to add two to three more races they originally were iffy on for this season.

Earlier in the day, the team was almost sent packing, as the No. 04 machine was the last truck to make it in via qualifying speed. A Cinderella evening almost turned into a pumpkin before it began.

“We knew we were gonna be struggling on speed,” he said. “We built this thing to handle and not necessarily for top speed. We weren’t that concerned with it, but what a rude awakening to get here and be that close. Not a lot of fun, a little stressful before the race.”

Now Roper can add a top five to his resume, which is looking better by the day. With Shane Whitbeck calling the shots, he said there are more good finishes on the horizon for the No. 04 group.

“We’ve got some work to do to run like we want to run,” he said. “When we come to the racetrack, we want to bring good equipment, we want to give ourselves the best shot anytime we can.”

It may have been Ben Rhodes and Truck powerhouse ThorSport Racing in victory lane, but in front of Roper (just barely) was Jordan Anderson, for the second year in a row coming home a runner-up finisher.

Rhodes shared some admiration for both Anderson and Roper post-race.

“I don’t think there are enough people like (Roper) in this series,” Rhodes said. “I’m super proud of him, what he accomplished and his run tonight. Big congratulations to him.”

Just a couple of underdogs that aren’t supposed to be here, shining bright under the magic of Daytona.

Nice article. I watched Roper closely on the last restart and it would have been so nice to see a small operation like him win. Like the plate tracks or not, this is pretty much the only place a underdog can steal a win unless its weather related.

Great run again by Anderson. Hopefully he has a successful year in Xfinity