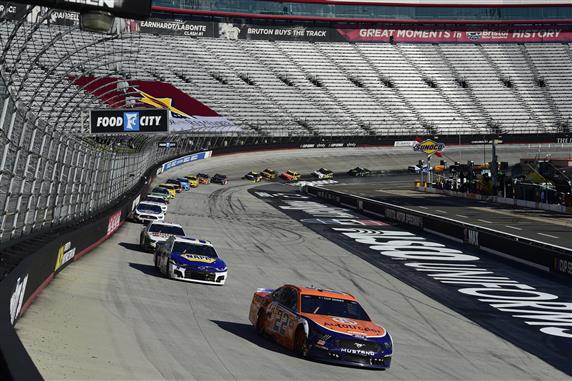 1. Midweek races could be a thing

Talk about trial by fire. NASCAR and fans have both tossed around the idea of midweek races for a while, and the forced layoff put the sanctioning body into the corner that made it happen. We’ve had two midweek NASCAR Cup Series races, at Darlington Raceway and Charlotte Motor Speedway, with a third next week at Martinsville Speedway.

That’s a quick turnaround for teams, but there’s potential for a few midweek night events to shorten the overall length of the current schedule without dropping the number of races or to provide a weekend off while still keeping the race numbers stable. Plus, there are a few tracks close enough to NASCAR’s hub of Charlotte, N.C. — Darlington, Martinsville, Bristol Motor Speedway as well as Charlotte Motor Speedway — that it’s not a ridiculous notion provided they raced close by the weekend before and after as well.

There’s potential here, if it was done right.

Except there’s a bigger problem than logistics for teams: television. The rainout at Charlotte last week, which moved the Cup race from Wednesday night to Thursday evening pushed the NASCAR Xfinity Series race at Bristol that had been scheduled for Saturday to this past Monday. The reason for that was that the television crew didn’t have enough time to dismantle their setup at Charlotte and set it all back up while social distancing at Bristol in a day.

That only worked because there are currently no fans in attendance. Once the fans are back, moving a race to two days later isn’t really an option. Sure, it happens sometimes because of weather, but in this case, a rainout affected two races.

Speaking of fans, the other issue with the midweek races is that people aren’t watching them. The Coca-Cola 600 had roughly 4 million viewers and a 2.4 rating. The Thursday night race at the same track had less than half of that, with a 0.91 rating and 1.5 million viewers.  That’s fewer than some of the iRacing events that took place during the sport’s hiatus.

To the networks, ratings translate into advertising dollars, and they aren’t going to sign off on races with less than half the viewers of a Sunday race.

So really, nobody should be surprised if there’s no more talk about racing midweek after this.

This is a tough one, because I’m not really for cutting race lengths to a great degree — they should be long and difficult at the top level. But the more the race lengths do differ at the same tracks, the more doors it opens for teams.

It forces teams to make different strategic decisions. It’s easier to make the call for fresh tires in a shorter race, because the limited sets don’t have to go as far …. if tire wear matters. It’s harder to chase the track, because there’s less time to make changes.

Different race lengths force different stage lengths, changing fuel numbers. Damage or issues at halfway in a 500-mile race can be overcome more easily than in a 300-miler.

Maybe the solution is to meet halfway … have one race at tracks with two races always be 500 miles (or 500 laps on the short tracks) and the other significantly shorter (I’d love to say longer at places like Martinsville or Bristol, but practicality wins out).

Cup races shouldn’t be any shorter than 300 miles, but the split of distances at the same tracks might help break up the predictability a bit.

This has shown us that under the right circumstances, one-day shows are doable. Even with a practice session and qualifying, if NASCAR insists on late afternoon starts anyhow, the weekend could be condensed down to a single day. The money that saves on everything from tires to hotel rooms and crew per diems is not insignificant, especially over time. That’s a plus.

But there are a couple of bumps in this road.

One is sponsors. Less time on track equals less television opportunity. Condensing everything into one day also means the corporate meet and greets or fan Q&A sessions or pit tours probably don’t happen. So don’t look for sponsors to be willing to pony up if they’re not getting the same return.

It’s also a question whether or not fans would react well to the top series not being on track throughout a race weekend. Would the Xfinity and Gander RV & Outdoors Truck series suffer if there was no Cup activity on the same day? That’s a valid question here.

As fan access to drivers has dwindled, cutting the days the Cup drivers are at the track could hurt that aspect of racing further.

It also limits media availability. That might not seem like much, but a lot of content comes out of a race weekend that isn’t necessarily about that weekend: interviews are banked and information gathered for a variety of future endeavors.

There is a possible solution, and it could be a good one if it happened right. There’s good reason to condense the racing; part of that being that the racing has been better with less practice (more on that in a minute). But could the sponsor hospitality and media availability still take place on Saturday, coupled with autograph sessions sessions, Q&A sessions and other events? That could work if the drivers were willing. It would not be a good look for anyone to have them publicly complaining about an extra day that’s not really extra.

5. The road to parity isn’t paved with practice

Perhaps the best part of the five races we’ve seen under the one-day format is that there are different teams in the top 10, top 15 and top 20. That’s great for the sport and crucial in attracting new teams and helping the current ones grow.

NASCAR has tried all kinds of things to try and induce parity, and most haven’t worked. Making the cars all but IROC machines isn’t working. The bigger teams still have a massive advantage.

But the no practice/no qualifying format? It’s done a better job than any conscious effort NASCAR has made.

On a typical race weekend, the larger teams have an advantage because the more practice they have, the more pieces and parts they can try, the more data they can share, the more their money and fancy equipment back at the shop matters.

But when those teams all have to run what they unloaded, they lose that advantage. Yes, they have to offload a fast enough car from the hauler, but suddenly everyone can only work with what they have in front of them and the adjustments a team can make on pit road. That’s it. And the recent stretch has shown that some teams, including the wealthiest ones, haven’t been as good at that. Others, including some small teams, have shined, because racing the track with what they have is all they can do.

The different names popping up among the predictable ones each week as made this stretch of racing interesting. There’s something new to talk about without having to manipulate anything to get there. This is the road NASCAR needs to be on.

Mid week races are an issue as far as attendance. You would only have fans who could get back home to work the next day, in general. as far as a one day show, If they want to cut ticket prices by 2/3, maybe. To pay top dollar for tickets, inflated hotel costs, and a quick trip there and back….

I like the better racing that has been seen as a result of no qualifying and no practice. I think they should keep it in place.

When the impound race rules were in place, as a fan attending a race, I found it to be annoying. We went to Richmond with tickets for both the then Busch series and Cup races. Since we drove down on Friday, we went to the race right away but since the Cup cars qualified and practiced on Friday as well, we had to waste the entire day Saturday with no on track action. It didn’t work for us.

Shortening the races will give teams more options on strategy. I must be watching the wrong races. With the built in cautions for stage breaks it has taken most of the strategy out of the racing. I would say it has made a crew chiefs job easiers. In the good old days all the crew chief knew for certain when the race started was the car could go only so far on gas. The rest of the race was a mystery of when cautions would come and maybe a sudden weather variable. But now it is split the first stage split the second and so on. The only strategy call the chiefs have is to take two tires and hope you start on the front row. Because without clean air it is pointless to take two tires. All the drivers said this about Charlotte, take two tires and not be out front it was a worthless choice. Think about most of us could call a race from atop the pit box now. What must Dale Inman really be thinking?

I soooooo totally agree with point #5. that has been amazing to see.

The no practice has really brought parity if a team hits their set-up off the hauler they are in for a good day. It really shows who can do their homework, but be careful here. Anytime you introduce something new, you will always have parity but teams with more money will always recruit that better talent and separate themselves. So while the no practice is showing good results now, I don’t think it would be sustained and after 2 years we would be back to where we were just a few months ago. I do like the limited to no practice moving forward as it will save teams a ton of cost at the track. But it may increase costs away from the track.

Mid-week racing would be more entertaining if they didn’t go to the same track. Especially one that proves with this package clean air is the dominant factor. Have you ever watched a race where a car can look so dominate leading and drop like a rock once it loses the lead in traffic like the Coke 600 on Sunday? I am still pumped about the new generation car and continue to follow its development closely ?

Ratings might be better for the mid week races if they weren’t scheduled to end by midnight. Also all the breaks for competition cautions and stage breaks kill the flow of the start of the race as well. I know I lose total interest in those races if I’m not going to be able to stay up (due to working the next morning) anyway. My guess is this has an affect on the viewing numbers.