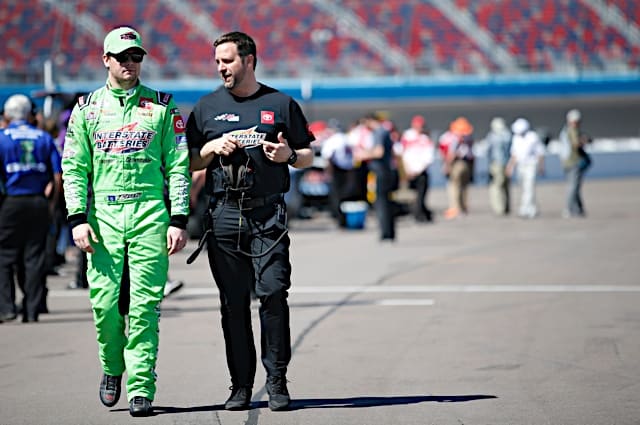 Chris Gayle, crew chief for Erik Jones in the NASCAR Cup Series, has been suspended for one race and fined $20,000 after yesterday’s (May 17) event at Darlington Raceway due to a lug nut violation, NASCAR announced today, May 18.

In post-race inspection, Jones’ No. 20 for Joe Gibbs Racing violated section 10.9.10.4, which deals with lug nuts not being properly installed.

Jones finished eighth in Sunday’s race and will not have any points taken away.

Seth Chavka, a JGR engineer, will fill in for Gayle for the second Darlington race.

Five other cars also violated section 10.9.10.4 of the rule book; the No. 4 of Kevin Harvick, the No. 11 of Denny Hamlin, No. 22 of Joey Logano, No. 42 of Matt Kenseth and the No. 95 of Christopher Bell were all found with lug nuts not properly installed. Corresponding crew chiefs Rodney Childers, Chris Gabehart, Paul Wolfe, Chad Johnston and Jason Ratcliff received fines of $10,000 each, but NASCAR did not suspend them.

I’m sure NA$CAR will have a laughable excuse for the difference in penalties.

The surprising thing isn’t that Nascar continues to have multitiered rule book, depending on who you are, but that the teams keep putting up with it.

Same penalty should be same fine to treat one,one way and five others different for same code violation is ridiculously flawed doesn’t matter 1 lug,2 lug difference still same code violation! Something needs to change things not equal and needs to be remember last year it’s clearly written,,,,oh but not told the same,,,Joke!!!!